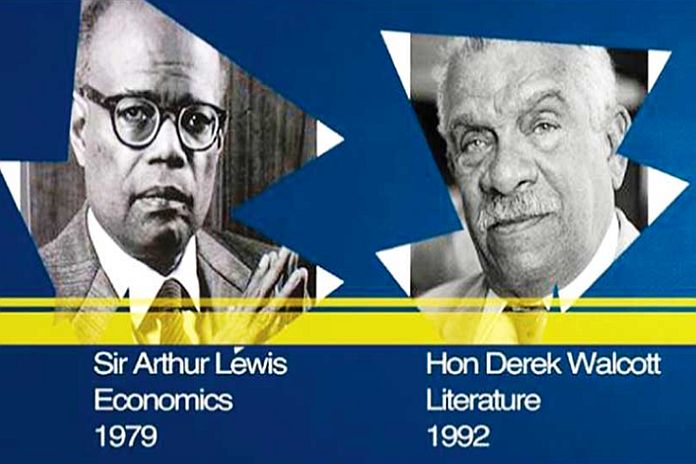 On the announcement of the annual Nobel Laureate festival, January 6 to 31, 2021 under the theme – Celebrating Excellence: Challenge, Uncertainty, Opportunity – Dame Pearlette Louisy, chair of the committee, notes that the theme aptly describes the environment in which this year’s festival is being observed.

“But perhaps more significantly, it embodies the very elements which drive the creative process that leads to excellence. A challenge confronts the one who seeks to expand the boundaries of his field of endeavour; there is uncertainty as he presses on, but the opportunity to make a contribution whether big or small cannot be missed. This is the stuff that excellence is made of and both of our Nobel Laureates would have been all too familiar with that process,” she noted.

How long will it take for our Caribbean leaders to learn a simple lesson that has been so eloquently put by Albert Einstein; “We cannot solve our problems with the same thinking we used when we created them”.

In fact, maybe Einstein other quote may be more relevant to the political environment in which we have existed in the last 20 years, Einstein also said: “The true sign of intelligence is not knowledge but imagination’’.

Sir Kenneth Dwight Vincent Venner was absolutely correct in summing up our problems as a crisis of leadership, but we must move further and state that it is leadership without imagination. It is sad to say that we have been on the treadmill of imaginative approaches to governance since the departure of Sir John Compton, we have not moved since 1996.

The managing director of the International Monetary Fund (IMF) speaking at a recent high-level Caribbean forum in Jamaica was very blunt is presenting the effects of the crisis of leadership without imagination. Christine Lagarde stated: “This is something that is prevalent in the Caribbean – not only in the Caribbean – but there are also other places that, essentially, race to the bottom. The problem with the race to the bottom – offering the best possible tax deal, at the lowest possible rate, over the longest possible time – is that everybody ends up at the bottom, and the capacity to generate revenues and growth is impeded for all of them.”

When Sir Arthur Lewis posited his ‘Industrialization by Invitation’ it was intended to invite investors to set up shop to manufacture for export, provide a platform for new employment and the transfer of knowledge to the local population, who will ultimately take control of these new industries. The many factory shells in Bise, Union, Odan, Dennery, and Vieux Fort are edifices of a failed economic policy, this is because it must be tied to the transformation of your education system.

We have used the same system with the same failures. We have looked at Tourism as an export and splashed concessions to ‘manufacturers’ to set up shop for export. We have seen the same failures of hotels, the same under-employment, and the same minimal impact on the economy. Again, it must be tied to the transformation of your education system.

If an analysis is done on the value of concessions given to the tourism sector in Saint Lucia, that sum may reach over $1.0 billion. Yet with that investment by the government of Saint Lucia, we are still in a poor economic state. We cannot solve our problems with the same thinking that created them.

In his response, host prime minister Andrew Holness is reported to have said in a report in the Jamaica Gleaner that it was policy that Jamaica could not grow through offering incentives, pointing out that the government needed stable and predictable revenues to function. It was a position that the IMF head pronounced as ‘very brave’ for a government in the Caribbean to eliminate most of the generous concessions given to attract investors.

We are at the point we also have to become ‘very brave’ and get out of this race to the bottom. Whether it is tax concessions or citizenship by investment (CBI) fees we have this proclivity to plunge into the bottomless pit. We must believe in our product, that Saint Lucia is an attractive location and that we can turn the heads of investors to come to our shores. This economic prostitution has left our islands with the diseases of poverty, economic stagnation and high unemployment.

The deputy prime minister of The Bahamas also shared similar views, that tax incentives have not brought the desired results, and that his government is also looking at a review of these concessions. Ironically, Trinidad and Tobago minster of finance has also spoken about changes in the tax regime for the oil sector.

It is said that Helen was described by Dares Phrygius as “She was beautiful, ingenious, and charming. Her legs were the best; her mouth the cutest. There was a beauty-mark between her eyebrows.

If we profess to be the Helen of the West, rightly or wrongly, it reflects how we view ourselves. Our approach to investment must also be clothed with that same concept.

Supporting migrants and remittances as COVID-19 rages on