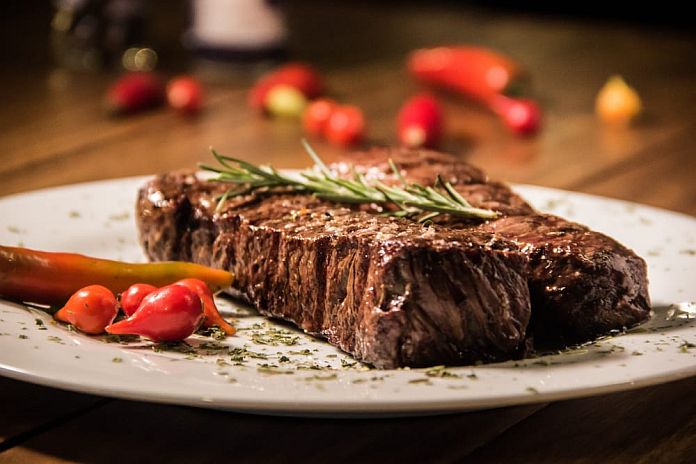 In the absorbing 2015 documentary “Steak (R)evolution,” a French chef cries out, “To beef, or not to beef?” For carnivores and omnivores, that’s what you call a silly question.

Here’s the thing: Grilling your own steak has its charms, but nothing compares to sitting down at an honest-to-goodness steakhouse for the supreme Paleo-feast. That’s been mostly off the menu this year — you might have heard that there’s a wicked bug going around – so those of us who can’t be sated by chopped beef or its tasty cousins are “steaking” out new territory.

It was with no small amount of rejoicing, then, when Peter Luger Steakhouse – a 133-year-old Brooklyn, New York institution – began shipping its marbled masterpieces by mail. (Burgers, too.) It even accepts credit cards.

GM David Berson, whose great-grandfather bought the Brooklyn eatery in 1950, told the media that the restaurant had partnered with delivery app Caviar, which is owned by DoorDash and serves pricey establishments.

Good for them, because high-end restaurants serving the finest cuts have been hammered this year.

“Restaurants were hit hard by the new coronavirus,” David Portalatin, an industry adviser with The NPD Group, told the Associated Press. “In the US alone, the industry lost six million jobs in March and April. But fine dining was hit hardest of all. At the low point in April, US fine-dining transactions were down 82 percent from a year ago.”

Which returns us to the quest for a righteous ribeye, done to perfection.

Long before COVID, folks who needed a cut above the local supermarket turned to Omaha Steaks, whose direct-to-consumer and eCommerce model made it well-positioned for a pandemic. So, fulfilling its sacred duty to steak lovers with limited choices, Omaha Steaks has created a new holiday to celebrate steaks – complete with a sale, of course.

“This year, [Omaha Steaks] is celebrating its inaugural Butcher’s Day, a holiday created to not only celebrate the company’s community of master butchers whose wealth of experience means customers are getting the best every time, but also to offer incredible discounts to loyal customers,” the company said this week in a statement. “While many other retailers offer sales this time of year, the Butcher’s Day sale takes it a step further by putting the spotlight on America’s dedicated butcher.”

Butcher’s Day runs October 13-14 – the same days as Amazon Prime Day. During the holiday, Omaha Steaks plans to offer exclusive sales on a wide selection of what it calls “butcher-crafted steak packages.”

Is Steak without the cow next?

Now, suppose you like the idea of eating steak more than — and there’s just no way around saying it — actually eating a cow. It’s a world of wonders, and so now there are alternate (yet delicious) options.

For example, you’ve no doubt heard about Impossible Foods and its meatless Impossible Burger, which debuted in 2019 and made quite a splash first at Burger King, then Walmart.

But it gets ever better (or at least steakier). Impossible Foods Founder and CEO Dr. Pat Brown was at the Consumer Electronics Show last January hawking his plant-based burger when he said this, as quoted in The Spoon: “[Steak] has huge symbolic value. If we can make an awesomely delicious world-class steak … that will be very disruptive not just to the beef industry, but to other sectors of the meat industry.”

Whole cuts of meatless steak. Did you ever? When they come up with the zero-calorie stuffed baked potato to go with it, stand back. (And don’t forget the sauce-less dipping sauces.)

There’s a lot at Steak these days

All of this steak talk is likely building up an appetite, but before going in search of a socially distanced steak dinner (they’re out there), we’d stake our reputation on one of the most memorable social media blitzes of the COVID era.

It centered, like this story, on steak. Or Steak-Umm, to be precise.

As PYMNTS reported recently, frozen steak brand Steak-umm was recently crowned by some media as COVID-19’s fact-checker-in-chief when it tweeted out: “friendly reminder in times of uncertainty and misinformation: anecdotes are not data. (good) data is carefully measured and collected information based on a range of subject-dependent factors, including, but not limited to, controlled variables, meta-analysis and randomization.”

For some light reading whilst enjoying Steak-umm, or a steak (meatless or meaty, it matters not), allow us to recommend “Frozen Meat Against COVID-19 Misinformation: An Analysis of Steak-Umm and Positive Expectancy Violations,” published in the “Journal of Business and Technical Communication.” It’s a page-turner.

TSA screens over one million passengers on a single day since...