On December 6, Venezuelans will go to the polls to elect a new National Assembly. Since the last election in 2016, self-declared interim president and opposition leader Juan Guaidó has seen his domestic popularity—and his standing among many foreign nations—slide.

In fact, upon Guaidó’s return last year from an international tour—financed by the United States—to seek backing for more sanctions and the ouster of elected president Nicolás Maduro, Guaidó was booed out of the Caracas airport. Such was the anger of ordinary Venezuelans against an individual who recently signed a contract with US-based mercenaries to overthrow the government in a bizarre failed plot that has come to be known as the “Bay of Piglets.”

Now, Guaidó and right-wing factions within the National Assembly are boycotting the elections, as opposition leaders have vowed not to recognize the “false” electoral body designated by the Supreme Court. The Partido Socialista Unido de Venezuela (United Socialist Party of Venezuela, or PSUV) and its allies are expected to win on December 6.

While Guaidó’s standing in Venezuela is currently at rock bottom, the self-declared interim leader has also seen much of his international support evaporate. According to an August 14 press statement issued by the US State Department entitled “Joint Declaration of Support for Democratic Change in Venezuela”:

We call on all political parties and institutions in Venezuela to engage promptly in, or in support of, a process that will establish a broadly acceptable transitional government that will administer free and fair presidential elections soon and begin to set the country on a pathway to recovery. For a peaceful and sustainable resolution of the crisis, a transitional government is needed to administer presidential elections, so that no candidate has an improper advantage over others.

For its part, Global Affairs Canada (GAC) issued an identical statement, calling for a “swift and peaceful transition to democracy” in Venezuela.

Like Venezuela’s opposition leaders, US President Donald Trump and Canadian Prime Minister Justin Trudeau will not recognize the upcoming legislative elections. They have instead demanded “a process that will establish a broadly acceptable transitional government that will administer free and fair presidential elections,” which are not yet due, and which would necessarily exclude Maduro. This is the usual formula: one that establishes a pretext for more sanctions, violent regime-change actions and open coup attempts, all geared to stoke a revolt among the Venezuelan people and a mutiny among the armed forces.

However, the press statement issued by the US State Department and GAC is notable because of the dwindling number of ally countries that are now “committed to the restoration of democracy in Venezuela.” What used to be a long list of more than 50 nations is now down to just 19: Albania, Australia, The Bahamas, Bolivia, Brazil, Canada, Chile, Colombia, Costa Rica, the Dominican Republic, Ecuador, El Salvador, Estonia, Georgia, Guatemala, Haiti, Honduras, Hungary, Israel, Kosovo, Latvia, Lithuania, Panama, Paraguay, Peru, Republic of Korea, Saint Lucia, Ukraine, and the United Kingdom.

This is a far cry from the formerly extensive coalition of dozens of states that have heretofore unequivocally recognized and supported Guaidó. The State Department could not even get sign-on from all of the members of the Lima Group—the multilateral body consisting of 14 countries, including Canada, that is dedicated to a “peaceful exit to the ongoing crisis in Venezuela.” Thus, the list of partner states now includes Israel, along with some of the most servile allies of the US (and notable violators of human rights and democracy) such as Bolivia, Chile, Colombia, El Salvador, and Haiti.

More intriguingly, the two rivals to Canada’s defeated bid for a United Nations Security Council Seat last June, Norway and Ireland, do not appear on the list of countries dedicated to “an end to the Maduro dictatorship.” This appears to vindicate those who had lobbied the UN and other international organizations to reject Canada’s campaign for a UNSC seat, citing the Trudeau government’s support for anti-democratic actions in Venezuela, Bolivia, and Haiti, to name just a few examples.

Even many in the US Congress admitted the failure of the Trump administration’s Venezuela policy in a recent hearing.

“Our Venezuela policy over the last year and a half has been an unmitigated disaster,” said Senator Chris Murphy, a Democrat from Connecticut and a member of the US Senate Foreign Relations Committee. “If we aren’t honest about that, then we can’t self-correct.” Murphy continued, declaring that US support for Venezuela’s opposition forces has handed Maduro an opportunity to label Guaidó an ‘American patsy’ while hardening support for his government around the world.

Ironically, Trump may have been better off if he considered some of the diplomatic overtures coming from within the Venezuelan government. Its minister of foreign Affairs, Jorge Arreaza, wrote an op-ed for the Council on Hemispheric Affairs (COHA), stating, “Trump would do better if he followed his initial instinct of talking to president Maduro. A respectful dialogue with Venezuela is what is really in the interest of the United States.”

It is not surprising that Senator Murphy’s admission of failed coup attempts at a recent Senate Foreign Relations Committee meeting on August 4 has become a popular YouTube video. During the hearing, Murphy pressed Special Representative for Venezuela, Elliott Abrams, on the administration’s disastrous policy on Venezuela, which has “left America in a weaker position, failed to restore democracy, and allowed the humanitarian situation to worsen.” Murphy continued:

[W]e thought that getting Guaidó to declare himself president would be enough to topple the regime. Then we thought putting aid on the border would be enough. Then we tried to sort of construct a kind of coup in April of last year, and it blew up in our face when all the generals that were supposed to break with Maduro decided to stick with him in the end… I think this is just a prescription to get stuck in a downwards spiral of American policy from which we cannot remove ourselves.

The Canadian media should take a similarly critical stance toward the Trudeau government’s dubious attempts to oust the Maduro regime, including its failure to condemn Guaidó for his partnership with armed US mercenaries to foment a violent coup within Venezuela. Anything less is an endorsement of generations of failed US-led policies in Latin America, ones that have contributed to violence and destabilization throughout the entire hemisphere.

Join the Canadian Foreign Policy Institute (CFPI) on Thursday, August 20, for an historic event featuring Venezuelan Foreign Minister Jorge Arreaza, who will speak directly from Caracas on Canada’s interference in Venezuela and the Trudeau government’s support for self-declared interim president Juan Guaidó. The event is sponsored by Canadian Dimension. You can register for the webinar here. 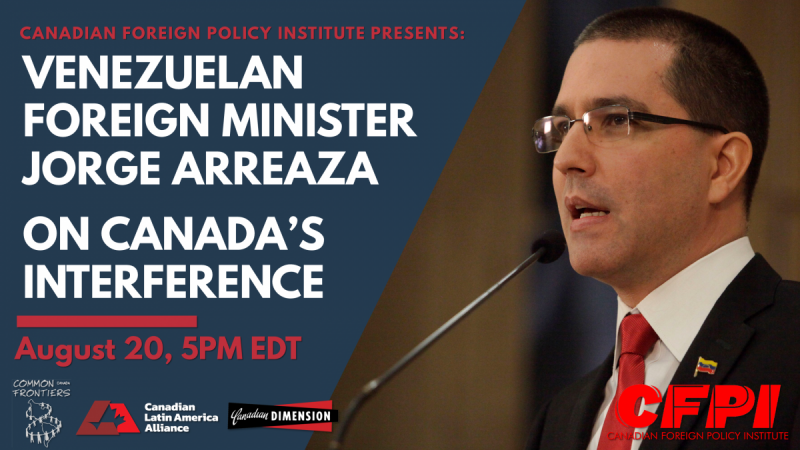 This article written by Arnold August, originally appeared on Canadian Dimension on August 17, 2020. 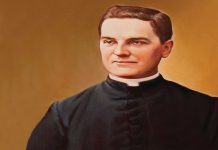