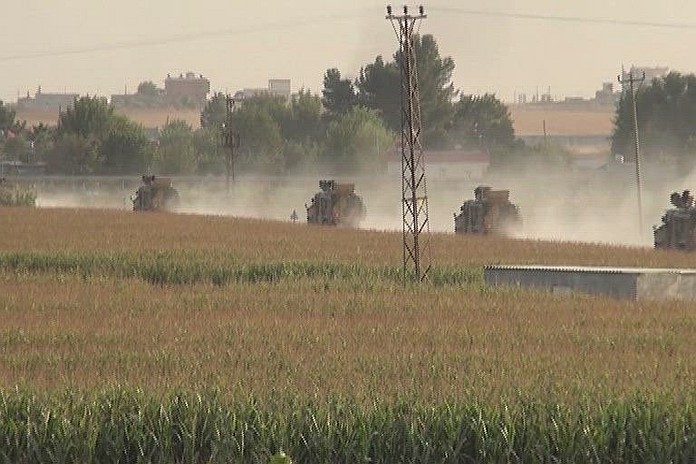 Russia has taken a fortune out of Syria; they have milked it dry. Sold them arms, protecting the president while emptying the Syrian gold and monetary reserves. Followed up with protection by both Russian military, conjoined with Russian mercenary private soldiers owned by Russian corporations which Vladimir Putin is a sleeper shareholder and director of. Russia [Putin] now owns Syria who owes so much money for arms and equipment. It’s a repeat of what happened in Venezuela.

The Americans thought it was right to employ the Kurdish fighters to do a job that the Americans did not have the guts to do themselves. It is most unfortunate that the US, under the control of president Donald Trump, is based on cowardice. They wanted ISIS in Syria destroyed, but used the Kurds to do it for them. The Kurds have imprisoned thousands of ISIS fighters and are left guarding them and feeding while the yellow stripe of the Americans cowardice runs for cover outside of Syria. It would appear that the US has done a deal with Turkey to abandon the Kurds so that the Turks can slaughter them.

With the case of American cowardice, it reminds me how the Americans would not enter World War II while Europe was overrun by German troops who carried out atrocities with the knowledge of the US. Millions of Jews were slaughtered while the Americans were happy to sell arms, ammunition, and equipment to the Europeans but refused to join in and help them fight the Germans. Britain begged that the Americans helped by sending troops. America refused and carried on selling millions of dollars of arms to Britain. It was only when the USA was attacked at Pearl Harbour by the Japanese and attacked by Japan’s warplanes, bombed until they were almost destroyed.

Up until this time, the US had declared itself neutral and watched for almost three years in Europe being slaughtered. Now they swamped Europe with American troops and equipment, chewing gum, chocolate, and nylon stockings. Had they helped Europe in good time, millions of Europeans and Jew’s lives would have been saved. They were shocked out of their cowardice and greed by the Japanese attack. Had the US not joined the war when they did the whole of Europe and the UK would have been lost to Germany, the US at the time, until they were attacked, didn’t give a damn.

Now the US has used the Kurds and has in what can only be described as an act of cowardice abandoned them to the fate of being slaughtered by an act of genocide, by an ‘extremely nasty man’ called Recep Tayyip Erdoğan, president of Turkey and ‘butcher of people’.

The whole world is grandstanding and watching the slaughter, instead of getting an immediate UN order against what Turkey is doing. This matter must be acted against now, not next week or next month. The Turks are evil, history can show that they are traditionally wicked, even their predecessors, the Ottomans, were ultra-wicked and the Turks are little better. This is not a matter of the Turks shunning invaders of their country within their country, this is an outright attack on a sovereign state for the purposes of annihilation and extinction, genocide, of a people who they dislike.

The Russians will do nothing; they will even veto any votes to stop the Turks at the United Nations (UN). Syria owes the Russians billions, and the Turks probably owe them a lot of money for the recent equipment sales of the S400s. So, they will support Syria, and they will also support Turkey while signing the death warrant of the Kurds.

On September 11, 2019, last month, German Chancellor Angela Merkel declared that Europe shouldn’t count on American military assistance any longer and should look towards other power centers instead.

Merkel: USA Will No Longer Play Defender for Europe Anymore

She is most certainly right; Europe can no longer trust the US, in any matter whatsoever.

The European bloc is increasingly unhappy about the way the Trump administration handle’s a variety of issues, from the Iran nuclear deal to dealing with China.

The whole world now considers the USA a government of cowards. Most are disappointed by the way the US has backed down following threats from Iran, backed down after threats from Russia over Venezuela. Trump abandoned support of Venezuela when they most wanted help and most needed help.

When I talk about American cowardice, I am referring to the ruling class, those in government, from the president down. I know that thousands of American service members lost their lives, injured and maimed in the Second World War. There are American servicemen currently in Syria who have been confined to barracks, they are gutted by what is happening to the Kurds.

If I was an American, I would bow my head in shame. Deeply disappointed in writing these home truths.