My cousin Harry was mischievous and one day, when I was helping my aunt shell pigeon peas, he pretended to eat one of the worms and dared me to try it. I did and everyone laughed at my gullibility and continued to do so for many years afterwards, even though Harry had left for England “to study” and was nowhere around to rub it in.

Then, many years later, I heard that he had returned to Trinidad and Tobago and one day, while playing football in the village playground, I received a summons from my mother, conducted with antics and threats by one of my friends who she waylaid as he headed down the hill to the standpipe to fill his bucket. “She tell me to tell you that you better-come home right, right now!” he communicated with a foreboding smile.  I was in for it, I thought and to the jeers of the other boys, “You go get it!  Is licks in your tail” I hastily hurried home.

There was a strange car on the road in front of the house and I entered, a bit hesitantly, not knowing if it was the police following-up on the case of some disappearing oranges in the yard of the Bholas down the hill or the missing chicken that was thought to have entered a cooking pot during one of our “limes” or “boys-will-be-boys escapade”. My story prepared, (Mom, wasn’t me. I wasn’t there. Somebody telling lies about me.) I entered with my two companions in crime – fear and trepidation.

A strange man, still somewhat like my father, short but wearing a three-piece suit and a tie was talking to my mom. A detective, I thought but my Mom relieved me of the burden of fear. “Harry come back and wanted to see you,” she said.  I did not recognise him, so I stammered, “Is you?”  He replied with a strong English accent, “Yes, yes, I am checking up on the family tree.”

This was strange but I reasoned, based on my limited geography studies in school, that England had a different climate from us, and he must have missed the local flora, especially the fruits. His parents had lived on the edge of the rice and sugar fields and at the back of their yard was the tallest coconut tree I had ever seen. We had a smaller area but even in the cramped space we had a “long” mango, a “pomerac” (Otaheite or Jamaica apple) and an avocado, known as “zabocca” in Trinidad. “Which one you mean?” I asked.  “The big coconut tree?” He was miffed.  His English accent got thicker.  “No, no.”, he corrected, “I mean the ‘Deyal’ family tree.”  “Which one of them?” I enquired. “De zabocca not bearing yet, the pomerac not ripe and the mango tree too high for me to climb.” That was it. My mother seemed to have worked out what he meant and looked at me askance.

Harry seemed disappointed because, I learned afterwards, the rest of the family had told him how bright I was.  What was clear is that if he was the plain-clothes policeman, I had initially mistaken him for, I would have been charged with high “treeson”. I then hurriedly dashed off, my mom let me go in peace, and Harry mounted his high-horse and departed to check on the coconut tree. I consoled myself by thinking that our family tree bears a lot of nuts and fruitcakes.

We made it up to some extent later because I learned one constant in life. Family matters. I thought back to many years of growing up, hanging out, the good times, the hard times, and the changing ones. Through it all, the sense of family persisted, and some events remain rooted in the brain and memory. Of course, I learned later that despite how closely I had lived with my many aunts, uncles, and cousins there is a difference between “relatives” and “family”. Harry, his airs and heirs were relatively unimportant.

My mother and her rules were familiar as well as familial and not to be trifled with. For a quick and speedy explanation, the relative velocity is the speed I ran away from my cousin Joe after I wet him down with a hose. Relative humidity is the effect the had water on his clothes and temper. A better explanation of the difference between “relative” and “family” is the case of an angry wife who berated her husband with, “I should have married the devil.  He would have made a much better husband than you!” The husband replied, “You would’ve been arrested because marriage between relatives is illegal in this country.”

Families are relatively a more complex learning experience.  A child asked his father, “How were people born?” His father used the simplest explanation, “Adam and Eve made babies, then their babies became adults and made babies, and so on.” The child, not satisfied with his father’s account, then went to his mother, asked her the same question and she told him, “We were monkeys then we evolved to become like we are now.” The child ran back to his father and said accusingly, “Dad. You lied to me.” His father replied, “No, your mom was talking about her side of the family.”

There are, however, learning experiences about family life that are no jokes. A family (in my case) is a unit composed not only of children but of men, women, two dogs, one rabbit and, these days, fear of catching COVID-19. Children really can brighten up a house because they never turn the lights off. Leaving the air-conditioner always gives me a cold sweat. Home is a place where the mother and father wait until the rest of the family bring the cars back. Having one child makes you a parent.  Having two makes you a referee.

This is like some of the quips by comedians for whom family life is an ongoing theme. Rodney Dangerfield noted, “I was kidnapped and they sent back a piece of my finger to my father; he said he wanted more proof.” Brian Kiley quipped, “My wife told me today that I’m gonna become a father for the very first time; the bad news is – we already have two kids.”  Woody Allen admitted, “I don’t think my family liked me … they put a live teddy bear in my crib.” On the plus side of the jokes, there is this one that I first told my mother but don’t dare tell my wife.

“During a lesson about adjectives, my friend, an elementary school teacher, asked her class to describe their mothers. One boy described his mother’s hair as “auburn”. Impressed by his sophisticated word choice, my friend asked, “How do you know her hair colour is auburn?” Her student replied, “Because that’s what it says on the box.” 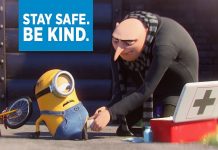 Spread the jokes, not the virus