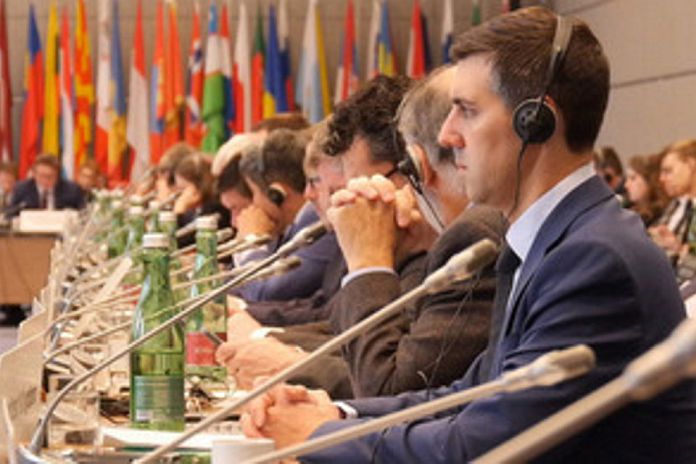 The following is a transcript of the speech:

The UK is deeply concerned by reports of Alexey Navalny’s deteriorating health, and repeat our call for his immediate and unconditional release in line with the interim measure indicated by the European Court of Human Rights, under Rule 39 of the Rules of the Court, on February 16, this year. This determined that the measures put in place by the Russian authorities to protect Navalny could not provide sufficient safeguards for his life and health. Unfortunately, this concern has already proved well-founded, within an alarmingly short space of time.

Navalny has now been transferred to a prison hospital, following reports from his medical team last weekend that he is in a critical condition, and could suffer kidney failure or cardiac arrest at any moment.

Prison doctors previously diagnosed Navalny with a double hernia in his spine, and his health continues to worsen, with possible complications due to the after-effects of his poisoning.

Navalny declared a hunger strike on March 31, after Russian authorities refused to give him adequate medical treatment for pains in his back and leg, despite a legal obligation to provide this care. It is vitally important that the Russian Federation grants Navalny access to medical professionals that he trusts without delay.

We also remind Russia of our previous statements at the Permanent Council raising our concerns about the politically motivated detention of Navalny, and that his treatment and continued detention is another example of the shrinking democratic space in Russia and the deterioration in human rights.

As an OSCE participating State, Russia has freely signed up to a series of commitments in the OSCE’s human dimension which they must uphold. That includes a commitment to ensure law enforcement officials take immediate action to secure medical attention whenever required; the right to freedom from arbitrary arrest or detention; and prohibition of torture and cruel, inhuman and degrading treatment, as well as upholding the rule of law.

We call – again – upon the Russian authorities to take all measures necessary to fulfil their obligations under the OSCE’s human dimension and other international human rights commitments, to provide Navalny with adequate medical care, and to release him from his politically-motivated imprisonment as a matter of urgency.