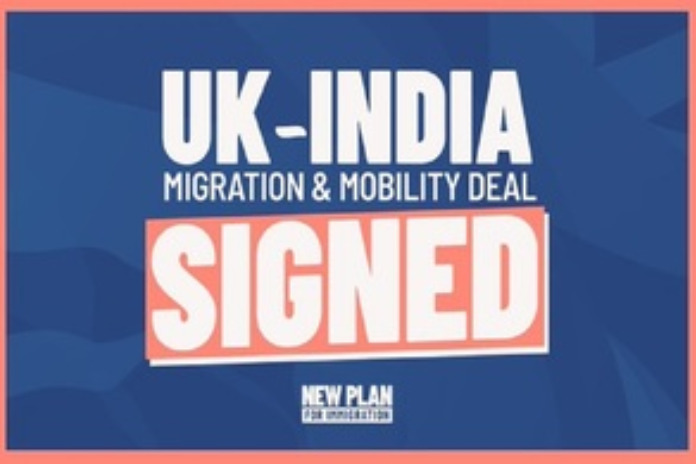 LONDON, England – Home secretary Priti Patel and Indian minister of external affairs Subrahmanyam Jaishankar, on Tuesday, signed the ‘Migration and Mobility Partnership’, which aims to make it easier for British and Indian nationals to live and work in each other’s countries, whilst also enhancing cooperation on combatting immigration crime and fraud.

This historic agreement is part of the UK government’s commitment to deliver an immigration system that attracts the best and brightest individuals from India and around the world. It also enhances UK-India cooperation to protect the great many Indian nationals who obey immigration rules, by stopping unfair manipulation of the system by a small minority who breach the terms of their visas or enter the UK illegally.

Home secretary Priti Patel, said: “ The UK government is committed to deliver an immigration system that offers clear opportunities to the brightest and best talent from India and around the world to come to the UK to study, work and live. This ground-breaking new partnership with India is an important milestone in delivering on that commitment. It will give greater freedom and opportunity to thousands of young people in the UK and India wanting to experience each other’s cultures, whilst also ensuring that we can work together to protect the vast majority of Indian nationals who do play by the rules.”

“The deal builds on prime minister Boris Johnson’s ambition to deliver a quantum leap in the UK’s bilateral relationship with India, will allow thousands of 18-30-year-olds to work and live in each other’s country for up to two years. This professional and cultural exchange programme will work in a similar way to current Youth Mobility Schemes, with India being the first visa national country (i.e. those countries which require visas to visit the UK) to benefit from this. It will allow up to 3,000 young Indian professionals to come to the UK through this route each year. India is already benefitting from the UK’s new points-based immigration system, which assesses applicants based on their skills and talent rather than where they are from,” the British High Commission New Delhi, said in a press release.

According to the most recent statistics, more than 53,000 Indian students came to the UK to study last year, up 42 percent on the previous year. Nearly a quarter of all international students in the UK are from India. In addition, the new post-study Graduate Route – offering eligible graduates 2-3 years to stay back after studies in the UK – will open for applications on July 1, 2021, offering yet another route for talented young Indians to build careers and experience in the UK.

“The agreement will improve the process around the return of Indian nationals with no legal right to stay in the UK and vice versa, and ensure greater co-operation around organised immigration crime. This is part of a wider joint UK-India effort to tackle organised immigration crime. The agreement commits both countries to regular dialogue between ministers and officials in this area for the first time and will include the sharing of best practice and training on matters including document fraud and border security.”

British High Commissioner to India, Alex Ellis, said: “This past year has shown what the UK and India can achieve to address shared challenges – from our best and brightest delivering a COVID-19 vaccine at record-breaking speed to the invaluable medical supplies we have provided each other. The landmark Migration and Mobility Partnership announced today will create new opportunities for young Indian professionals in the UK whilst also enhancing cooperation to ensure our system supports genuine workers and students. Indian student numbers to the UK are growing fast, and nearly half of all UK skilled work visas go to Indian professionals – contributing significantly to shared prosperity and mutual understanding. I’m confident the new the post-study Graduate Route and Young Professionals scheme will significantly increase those numbers.”

Analysis of Baroness Scotland’s stewardship of the Commonwealth Secretariat: Part 2