Guterres is in Moscow, at the invitation of the Russian government, where he is meeting with senior officials.

The UN chief and president Putin met virtually, according to a readout of their meeting.

The two leaders discussed the importance of renewed commitment to multilateralism, solidarity and cooperation in order for the international community to address the challenges of the COVID-19 pandemic and climate change.

Their talks also covered a number of international and regional peace, security and humanitarian issues and the need to resolve conflicts through political dialogue, mutual respect and understanding.

The Secretary-General thanked president Putin for the hospitality of the Russian government and people, and for the continued commitment of the Russian Federation in support of the United Nations.

Guterres expressed the interest of the UN to deepen its cooperation with the Russian Federation in the three pillars of the Organization’s work – Peace and Security, Sustainable Development, including Climate Change and Biodiversity, and Human Rights. 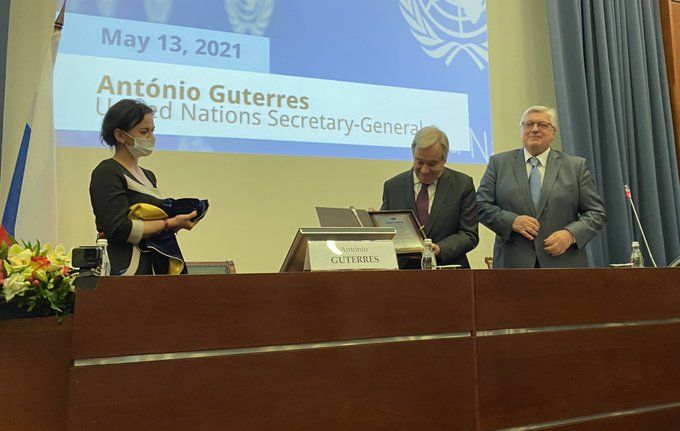 Also on Thursday, Guterres received an honorific doctorate from Moscow State Institute of International Relations, which he accepted on behalf of the UN.

Addressing professors and students, the secretary-general recalled that the university’s Model UN programme was named in tribute to the late diplomat Vitaly Churkin, a former Russian Permanent Representative to the UN in New York, who died in 2017.

Guterres spoke of common challenges facing countries, including the pandemic, and ways to tackle them.

While he underlined the need to ensure all people, everywhere, are vaccinated, the secretary-general noted that despite the work of the global solidarity initiative COVAX, many low-income nations “have yet to receive a single dose.”

He stressed that “COVID-19 vaccines must be seen as a global public good.”

The secretary-general travelled to the Russian capital on Wednesday. During his first day in the country, he met with foreign minister, Sergei Lavrov. The visit is scheduled to conclude on Friday.

There is still no vaccine for the shadow pandemic