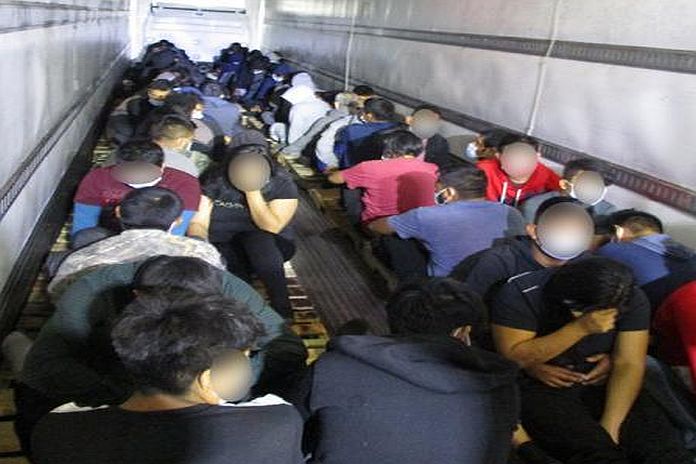 The first incident occurred during the mid-evening of December 4, when a tractor-trailer approached the checkpoint west of Freer, Texas. During an immigration inspection of the driver, a Service canine alerted to the trailer. At secondary inspection, agents discovered 138 individuals tightly concealed inside the trailer. They were determined to be illegally present in the United States from the countries of Mexico, Guatemala, El Salvador, Honduras, Dominican Republic, Ecuador, and Nicaragua. The individuals along with the driver, a US citizen, were taken into custody pending investigation.

The second incident occurred on the evening of December 5, when a tractor-trailer approached the I-35 checkpoint. The driver failed to stop at the primary inspection but ultimately complied with agents’ commands to stop. A subsequent non-intrusive scan of the vehicle revealed anomalies in the trailer. When the trailer was opened, 80 individuals were discovered crammed inside from the countries of Mexico, Guatemala, and Honduras. They were placed under arrest pending investigation by Homeland Security Investigation. US Border Patrol seized the tractor and trailer.

In both incidences, most of the 218 individuals were not wearing any personal protective equipment (PPE). All subjects were medically evaluated for their safety and none required medical attention.

Laredo Sector chief patrol agent Matthew Hudak stated: “These two cases illustrate the dangerous amount of human smuggling using large commercial vehicles. These vehicles are not made to carry people, putting the aliens at risk of life-threatening injury and offer no protection from COVID-19 or other infectious diseases.”

The men and women of the Laredo Sector remain vigilant as they carry out the US Border Patrol’s mission of protecting the American people, safeguarding our borders, and enhancing the Nation’s economic prosperity.