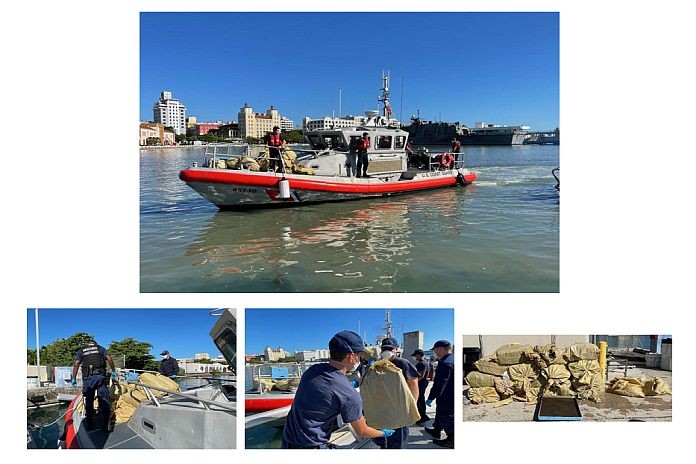 The apprehended smugglers are Dominican Republic nationals, who are facing federal prosecution in Puerto Rico on drug smuggling criminal charges of conspiracy to possess with intent to distribute a controlled substance aboard a vessel subject to the jurisdiction of the United States.

The charges carry a minimum sentence of ten years imprisonment and a maximum sentence of imprisonment for life. The transnational organized crime special assistant US attorney Jordan Martin from the US Attorney’s Office for the District of Puerto Rico is leading the prosecution for this case. The seized cocaine has an estimated wholesale value of approximately $12 million.

Coast Guard watchstanders at Sector San Juan directed the launch of a Station San Juan 33-foot Special Purpose Craft – Law Enforcement to interdict the suspect vessel. Once on scene and while in pursuit, the Coast Guard crew compelled the go-fast vessel to stop. Following the interdiction, the Coast Guard crew seized 16 bales of cocaine and apprehended the four-suspected smugglers.

“This successful interdiction is a result of the professionalism, close coordination and swift response displayed by the Coast Guard and Customs and Border Protection surface, air, and watchstander crews involved in this case,” said Cmdr. Beau Powers, Sector San Juan chief of response.  “These professionals respond and work daily to maximize our interagency capabilities and resources to stop drug smuggling vessels at sea. Together, along with the rest of our local and federal law enforcement partners, we seek to safeguard the nation’s maritime border and protect the people of Puerto Rico from this threat.”