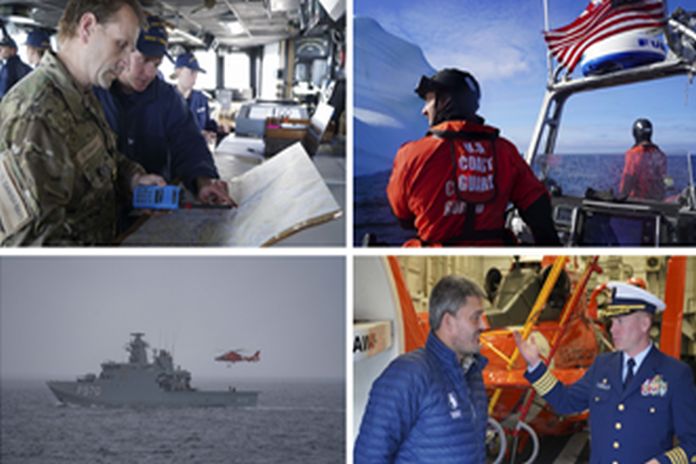 “I am very proud of the efforts and adaptability of every one of Campbell’s crew who demonstrated the ability to operate and execute our mission aboard one of the finest Famous-class cutters in the fleet, said Captain. Thomas Crane, commanding officer of Campbell. “Their dedication to duty and commitment to the Coast Guard helps to affirm the United States as an Arctic nation. It is also a credit to the name Campbell and our five predecessors. In addition to notable narcotics seizures and being the command ship for the 1996 TWA 800 recovery, we are now the first 270-foot medium endurance cutter to earn the Arctic Service Medal.”

Campbell sailed with additional support, including an embarked MH-65 Dolphin helicopter and aviation detachment consisting of two pilots and four aircrew, including a rescue swimmer. In all, eight shipriders augmented the 100 person crew during the patrol, assisting in operations, providing health services, and documenting the journey.

“I am humbled by the opportunity to be a part of this historic mission and am glad our crew’s experiences will be shared with family, friends, and future generations,” said Crane. “Going to sea is challenging and requires personal sacrifices both from our crew and loved ones left onshore. Still, the camaraderie, teamwork, and pride of our crew are the reasons I go to sea. Campbell is a great ship with a great crew able to execute missions of strategic national significance amid a global pandemic.”

“This effort strengthens international partnerships and provides a foundation for standard operations in the rapidly developing Arctic maritime environment,” said vice admiral. Steven Poulin, commander US Coast Guard Atlantic Area. “As interest and maritime traffic in the area increases, the importance of the US Coast Guard’s interoperability with allied partners becomes more critical to ensuring we protect national and shared security interests. Exercising our unique blend of polar operational capability, regulatory authority, and international leadership across the full spectrum of maritime governance is vital to the future of the Arctic.”

In support of the National Oceanic Atmospheric Association, International Ice Patrol, and Coast Guard Research and Development Center, Campbell’s crew conducted testing of specialized equipment and resources in the Arctic environment. They deployed oceanographic research buoys across Baffin Bay, the Labrador Sea, and the North Atlantic to measure ocean currents and wave heights that influence iceberg drift and deterioration.

“This valuable data can provide a better understanding of the lifecycle of icebergs that impact transatlantic shipping lanes,” said Mike Hicks, of the International Ice Patrol.

“This input significantly shapes the future of iceberg warning products in the North Atlantic and expands the capability of IIP to provide direct, tailorable support to vessels operating independently; an ability beyond the IIP’s statutory mission, but one that is likely to become highly desired with increasing Arctic operations,” said Hicks.

Matthew Lees was the RDC Demonstrations Liaison and coordinated technology evaluations for the patrol. These included:

“As cruise ship and commercial vessel traffic increases through the Northwest Passage, Campbell’s recent patrol highlights our commitment to ensuring the safety and security of US citizens,” said Rear Admiral. Thomas Allan, commander Coast Guard 1st District. “This was also a fantastic demonstration of how we work with our partners as we seek to respect sovereignty, maximize the use of our assets, and promote environmental stewardship.”

“Campbell’s efforts continue the United States’ strong relationship with Greenland, furthering a positive foundation for how the Coast Guard will interact and operate in the region,” said Poulin. “As an Arctic nation, cooperation and understanding of the dynamic and ever-changing Arctic operating environment is vital. The US Coast Guard is the primary polar and Arctic surface operator of the US military. The Coast Guard is committed to working collaboratively with like-minded partners through exercises like ARGUS strengthening global maritime security, regional stability, and economic prosperity.”