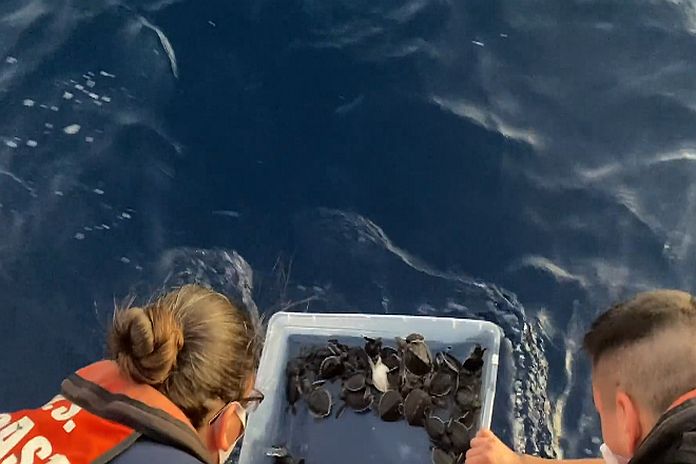 “Since the pandemic, we’ve had a hard time finding volunteers to assist us with sea turtle releases,” said Whitney Crowder, the sea turtle rehabilitation coordinator with Gumbo Limbo Nature Center. “But the Coast Guard hasn’t said no yet.”

During nesting season, March 1 – October 31, the turtles released, known as washbacks, journeyed from their nest to the ocean, but were blown back to shore and range from a few weeks to several months old. When turtles are blown back to shore, this is a sign that something is wrong. These juvenile turtles can have injuries, usually from predators, and often are emaciated. Once these turtles are admitted to a turtle rehabilitation center, the turtles are kept hydrated with fluids, allowed to rest in a hospital tank, and offered food until they are strong enough to be released back to their Gulf Stream habitat.

“Many of these turtles do not make it due to various obstacles they need to overcome, which is why sea turtles have such large nests,” said Crowder. “We are giving them a better chance to become an adult by releasing them offshore and as close to the Gulf Stream and their habitat, as possible.”

Things you can do to help save sea turtles:

Unrealistic estimates of revenue and expenditure for 2021/22, says St Lucia...