BLACK SEA — The Legend-class national security cutter USCGC Hamilton (WMSL 753) conducted a series of operational exercises with Ukraine, May 9, 2021, in the Black Sea.

Hamilton conducted maritime law enforcement, search and rescue, and ship handling operations with the Ukrainian navy vessel Island-class patrol boat Starobilsk (P 241). These operations were designed to increase interoperability as a part of a regional effort to bolster maritime partnerships with NATO partners.

“Hamilton was honored to conduct at-sea operations with the Ukrainian navy,” said Captain. Timothy Cronin, commanding officer of Hamilton, “Because we have shared interests, these events promote our strong partnership in ensuring safe and lawful activity in the Black Sea.”

The US Coast Guard has a long and enduring partnership with regional maritime forces, particularly in strengthening maritime forces in Georgia and Ukraine. Hamilton conducted at sea engagements with the Georgian coast guard and a port visit in Batumi, Georgia, last week.

“This was a great opportunity to interact and share best practices with the Ukrainian navy,” said Petty Officer 2nd Class Jason Dunsavage, Hamilton crew member. “Both of our crews take pride in being professional mariners, and today, we proved that. We look forward to doing it again.”

Hamilton is the fourth national security cutter and is the fifth cutter named for the father of the US Coast Guard – Alexander Hamilton, the first Secretary of the Treasury and advocate for the creation of the US Revenue Cutter Service.

The US Coast Guard remains operational during COVID-19, following all COVID-19 safety precautions and regulations.

The US Coast Guard is conducting a routine deployment in the US Sixth Fleet area of operations, working alongside NATO Allies and partners, building maritime domain awareness, and sharing best practices with partner nation navies and coast guards.

US Sixth Fleet, headquartered in Naples, Italy, conducts the full spectrum of joint and naval operations, often in concert with allied and interagency partners, to advance US national interests and security and stability in Europe and Africa. 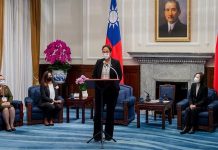 UK sets out plans to realise and maximise the opportunities of...