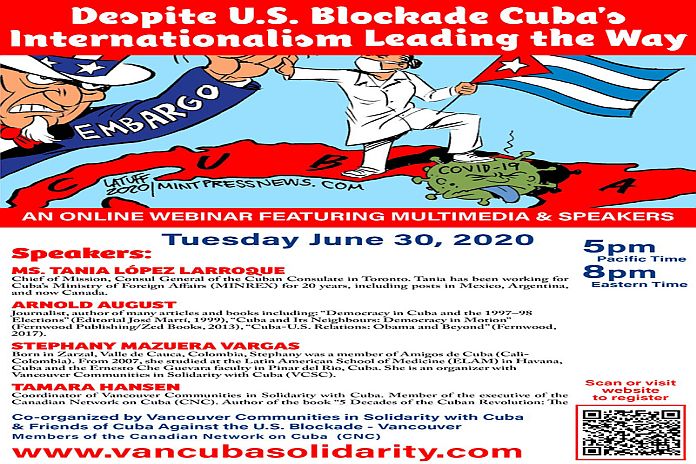 TANIA LÓPEZ LARROQUE – Consul General of the Cuban Consulate in Toronto. She graduated from the University of Havana’s School of Foreign Languages and completed her post-graduate studies at the Institute of Foreign Affairs in Havana. She has been working for Cuba’s Ministry of Foreign Affairs (MINREX) for 20 years, including posts in Mexico, Argentina, and now Canada.

ARNOLD AUGUST – Author of many articles and books including: “Democracy in Cuba and the 1997–98 Elections” (Editorial José Martí, 1999), “Cuba and Its Neighbours: Democracy in Motion” (Fernwood Publishing/Zed Books, 2013), “Cuba-U.S. Relations: Obama and Beyond” (Fernwood, 2017). An accomplished journalist, he contributes articles in English, Spanish and French to news and research sites in the United States, Canada, Cuba, Latin America and Europe.

STEPHANY MAZUERA VARGAS – Born in Zarzal, Valle de Cauca, Colombia, Stephany was a member of Amigos de Cuba (Cali-Colombia). From 2007, she studied at the Latin American School of Medicine (ELAM) in Havana, Cuba and the Ernesto Che Guevara faculty in Pinar del Rio, Cuba. She is an organizer with Vancouver Communities in Solidarity with Cuba (VCSC).

TAMARA HANSEN – Coordinator of Vancouver Communities in Solidarity with Cuba. Member of the executive of the Canadian Network on Cuba (CNC). Author of the book “5 Decades of the Cuban Revolution: The Challenges of an Unwavering Leadership” (Battle of Ideas Press, 2010).

Allen Chastanet insults to the people of St Lucia: Part 1