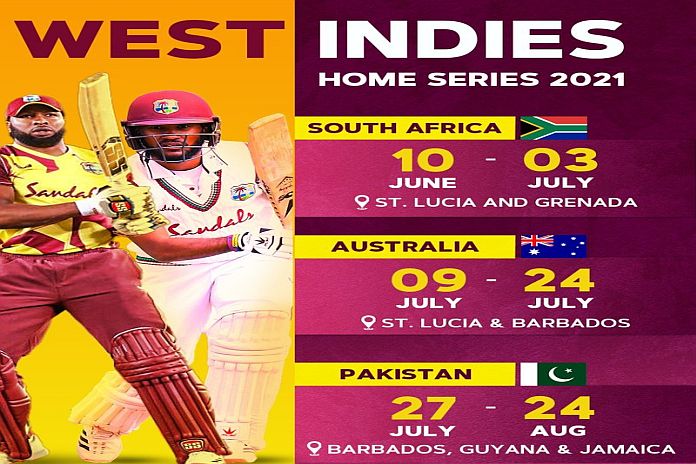 The Test and T20 International (T20I) series against the Proteas, rescheduled from 2020, will start the International summer. The world-renowned tourism destinations of Saint Lucia and Grenada will be the West Indies host venues.

South Africa are due to arrive at St Lucia on June 1 and will play two Test matches at The Daren Sammy Cricket Ground, followed by five T20Is at the Grenada National Cricket Stadium from June 26 to July 3. CWI is grateful to the Governments of St Lucia and Grenada for agreeing, at relatively short notice, to host the touring South Africans. This will be the first time that South Africa has played bilateral cricket in the West Indies since 2010.

The July 9 to 24 Australia white-ball tour of the West Indies will also begin at St Lucia’s Daren Sammy Cricket Ground hosting five T20Is. The Aussies then move on to Barbados for three day/night CG Insurance One Day Internationals (ODIs) at the world-famous Kensington Oval. The CG Insurance ODIs provide the opportunity for West Indies to secure more points in the ICC ODI Super League, as the West Indies strive to qualify automatically for the 2023 ICC Cricket World Cup following the recent 3-0 victory against Sri Lanka.

Pakistan is scheduled to arrive in Barbados on July 21 ahead of their five-match T20I Series, with the first two matches to be played at Kensington Oval before travelling to Guyana to play the concluding three T20Is at Guyana’s National Stadium from 31 July to 3 August. The West Indies and Pakistan teams will then travel to Jamaica for two back-to-back Test matches at Sabina Park from August 12 to August 24 which conclude four days prior to the start of the Caribbean Premier League in St Kitts.

This schedule features a total of fifteen T20Is for the reigning ICC T20 World Champions, as the West Indies continue the build-up to their title defense at the ICC T20 World Cup, in October and November 2021.

“Following the successful hosting of the all-format series against Sri Lanka earlier this year, we are delighted to announce that we are set to welcome South Africa, Australia and Pakistan to the West Indies. To host three international teams back-to-back in five territories is unprecedented, and putting these fixtures together was an enormous COVID-related logistical challenge.

We must thank the visiting teams for agreeing to travel at this challenging period for world cricket and we are especially grateful to our regional governments who are playing such a vital role in partnering with CWI to ensure that International cricket can be hosted safely, while providing entertainment for our loyal fans and income for our cricketers and cricket communities.”

CWI has also been working closely with Territorial Cricket Boards, along with the ministry of health and the ministry of sport in all the host countries, to orchestrate all the logistics and agree the safety and medical protocols for the tour. All players, support staff and match officials will stay, train and play in a bio-secure environment, with regular COVID-19 PCR testing taking place with assistance ministries of health and from CARPHA.

It is not yet determined whether fans will be able to attend matches in person, however, they will be able to follow live on TV in the Caribbean with Flow Sport, live on radio with Vibes FM and their partner radio stations and via ball-by-ball updates and the new live blog in the match-centre on www.windiescricket.com.