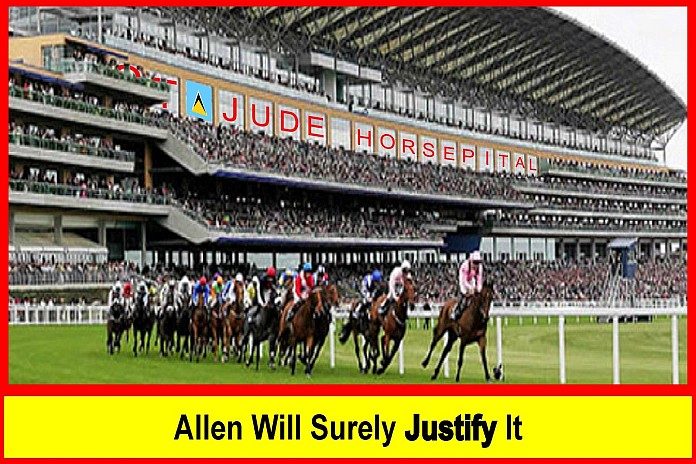 CASTRIES, St Lucia — Saint Lucia is said to be preparing to host The Pitons Cup, a race in which owners will purchase one of 12 spots, on December 13, 2019, in the town of Vieux Fort. This followed the arrival of 40 thoroughbred horses to the island with much fanfare and escort by the Royal St Lucia Police Force (RSLPF) and expedited services by the Customs and Excise department indifference to a healthcare crisis, rising crime, a total breakdown of law and order and an inept government, the making of a gamblers paradise – ‘Let her inspire you’.

The racetrack, managed by the Royal Saint Lucia Turf Club, was constructed by the Desert Star Holdings (DSH) company; hitherto that’s the wisdom proffered, without full disclosure of the DSH agreement and accountability and transparency of the Citizenship by Invest (CBI) programme – a failure by all reports.

The Pitons Cup is dubbed the first public event at the club’s new facility, which is part of the Pearl of the Caribbean development, spearheaded by China Horse Club founder and chairman, Teo Ah Khing.

“Organizers said they are hoping to draw participation from North America and across the Caribbean with the event, which is set to be held on Saint Lucia’s National Day as part of the 2019 CECF (Caribbean Equine Cultural Festival) Saint Lucia, a “luxury lifestyle and racing event” which will “couple social responsibility and business networking with the richest day of racing.”

“The arrival of the horses and the near completion of the race track” according to the principals involved “has secured local employment both at the construction phase, and in the training of young people”, to which the office of the prime minister reiterated support for all projects that are beneficial to Saint Lucian’s, whether investors are local or international.

“Saint Lucians have been looking forward to having this international racetrack and an event of this nature,” said Saint Lucia’s prime minister, Allen Chastanet. “We are readying to welcome race fans and enthusiasts from around the world who will be getting the Saint Lucian experience for the first time. The Royal Saint Lucia Turf Club adds to the attractions and activities that already exist on our beautiful and iconic island which is among the fastest-growing destinations in the world.”

Eden Harrington, director of the Royal Saint Lucia Turf Club, added, “The Pitons Cup sets the tone for the Royal Saint Lucia Turf Club and its aspirations to be both a significant contributor across the Caribbean and an innovator within the racing landscape. But core to our club’s belief system is the values of community, unity and active contribution. We are part of the community here in Saint Lucia and the success of this fledgling industry here rests on our ability to ensure these values are honored in every way.”

The Saint Lucia Labour Party (SLP) has called on the Allen Chastanet administration for full disclosure on the heels of statements by the senior communications director, Nicole McDonald, and government operatives that leaves more questions to the simple-minded albeit the 43 percent that the government of Saint Lucia and a prime minister often direct the messaging  and described by his peers as “a not to smart prime minister”.

The SLP contends that McDonald failed to inform Saint Lucians who purchased the horses and under what terms and conditions such a purchase took place, “ strongly condemns the government of Saint Lucia preoccupation with staging a horse race and by the prime minister’s assertion will be a money-losing venture – whilst there are calamities facing the country in health care, education, and crime.”

“The labour party strongly believes that the same effort to have these horses purchased and cared for to participate in a horse race on National Day [December 13] is the same effort that should have been given to complete our hospitals and repair our schools.”

Senator Joachim Henry, leader of opposition business eloquently explained: “Horse racing is not a basic need, nor does it fit within a Government Public Sector Investment Program (PSIP) or medium-term strategic investment agenda. While in some jurisdiction’s horses are sometimes raced purely for sport, horse racing interest and economic value are in the gambling associated with the sport of racing. However, considering the behavior of this United Workers Party (UWP) government alongside all of Saint Lucia’s social ills include:

Senator Henry continued: According to a research paper by Frontiers in Public Health published online February 9, 2018, which focused on the problem of gambling among Young People in Sub-Saharan Africa ages 10-24, cited “Over the recent years, many parts of the developing world have experienced unprecedented increases in gambling availability, participation, and expenditure. This pattern of growth has been evident in regions such as sub-Saharan Africa”.

“The research also indicated that while the gambling industry is considered to have a beneficial impact on the economy through employment and taxation, unfortunately, gambling addiction is increasingly evolving into public health.

“Gambling addiction has been defined as a biopsychosocial disorder characterized by a persistent and recurrent maladaptive pattern of gambling behavior. This disorder is associated with adverse psychological, physical, economic, social, and legal outcomes. Initially included in the Diagnostic and Statistical Manual of Mental Disorders (DSM)-III under the name “pathological gambling, this condition was subsequently renamed “gambling disorder” (GD) in the DSM-V and classified alongside substance-related disorders.

Due to youths high propensity for risk-taking, and not being aware of the potential undesirable effects of such behaviors (e.g., poor physical health, disrupted familial/peer relationships, increased risk of crime, poor academic performance, and an increased risk of mood disorders and suicide), young people’s engagement in gambling recreation may culminate in gambling disorder.

“Therefore, while the UWP is clueless as it relates to the problems facing Saint Lucia (crime, healthcare, housing, etc) they may have made the largest single investment with the people’s money, not only to be known as a tourism destination – “let her inspire you” – lacking basic facilities but now plagued with a gambling addiction.

“The government should grasp this critical time in our development and use the CBI programme funds effectively and efficiently to deliver the greatest benefits (health, education and infrastructure development) to benefit all Saint Lucians.”

Director of implementation in the office of the prime minister, Nancy Charles, (aka Octopus) has denied (subject to her competence) putting horses before the healthcare of Saint Lucians in the thrust to develop an equestrian industry. Charles told a press briefing Monday that it was really fictitious for politicians, would-be politicians, ‘wannabe talk show hosts’ and everybody, to create the impression that the government of Saint Lucia is placing, the needs of private investors and in particular – the issue of horses, before the people of Saint Lucia.

“I think that as an administration we have said over and over again that we are not where we want to be and/ [or where] we should be with regard to health care, but it is not to say that the government of Saint Lucia has not invested heavily in healthcare and we continue to invest,” Charles said.

As it relates to St Jude hospital and the Owen King European Union (OKEU) hospital, Charles rationalized that it has been very challenging getting to where the government wants to be. This, however, concedes to ‘numerous challenges’ with OKEU ‘a nurse’ can solve.

With little room to manoeuver the prime minister’s thin portfolio has accomplished nothing positive to the economy. The reality is that there remains a distinctive irony to horse racing and the prime minister’s spotty credibility – a growing tyranny that is gambling the nation’s future and endangering successive generations. Nonetheless, there are exceptions to create a horse racing cartel in Saint Lucia, safe from competition, regulation, and respect for the rule of law.

Horse racing and gambling is the gold standard for money laundering and financial crimes, made more complex with technological advancement that poses an advanced threat to degrading national security. This gives little integrity and honor among thieves.

The intelligence community monitoring the Caribbean have raised the red flag that horse racing in Saint Lucia is increasingly susceptible to money laundering, drug trafficking and criminal activities.

“When incomplete and outdated anti-money laundering policies and procedures do little to prevent and detect money laundering, internal controls weaken, and transactions occur through ideal rhetoric. It is not surprising that charlatans and fraudsters effectively thrive. Loopholes get wider, lacking the specialist in anti-money laundering and counter-terrorist financing. Self-interest allows individuals to enter free exchange without plausible reasoning and eventually government begins to spin out of control.

“Government must rely on collective capacity, sound judgment and rational to overcome its shortcomings, as there is a point of irreversibility from which no generation and the society at large can recover substantively. Just as economic and political liberty are intertwined. The defensive mode of the government is not satisfying the interest of Saint Lucia, but rather selling out simultaneously.”

“Saint Lucia is losing its identity and its soul to a dangerous and unstable future, idealized by demagogic politicians and their ethos of development and economic theory, more suitable in bygone years. Thus, the prime minister’s agenda and behaviour represents a challenge that’s spreading a gamblers’ paradise in a mono tourism economy tagged: “Let her inspire you”; is idle for instability, political turmoil and ultimately, disorder and the over-all collapse of the socio-economic appeal of Saint Lucia.”

Economy in 2021: How to accelerate recovery?