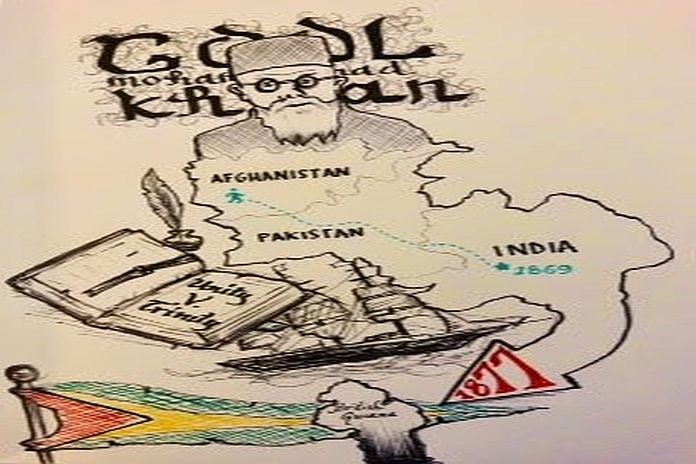 Some commentaries in the Guyanese print and social media concerning the Afghan Refugee Crisis came to my attention. The former foreign minister of Guyana, Clement Rohee penned an article, “Guyana has always been involved in the resettling of refugees and migrants.” It was a beautiful letter in which he left the door open for any refugees. But others slammed the door shut to refugees.

Two pieces came from “extremists elements” in NYC (Brooklyn and Queens). One, in particular, was written by a gentleman in Queens using the fake name “Farah Ali.” The other expressing a lot of noise on social media came from Brooklyn. The “trouble makers and extremists”, with no constructive input, always seem to come from outside Guyana.

Afghans are not new to Guyana and began arriving in this South American colony via India from the 1840s to 1917 during the age of indentureship from India to Guyana. Fee-paying passengers who were not indentured also came to the colony. But let’s back up, part of Afghanistan was ripped away from Afghanistan and given to British India during the Anglo/Afghan. Today that is the Northwest Frontier Province (NWFP) of Pakistan that is predominantly Pashtuns (Pathan), with many bearing the name “Khan”.

Wazir- E- Azam, prime minister of Pakistan, Imran Khan, is a Pakistani of Afghan origin. Imran Khan and his sisters have been to Guyana in recent times.

The founder of Guyana’s Queenstown Mosque, in the Capital, Georgetown, was none other than Gool Mohamad Khan (GMK), an ethnic Afghan Guyanese. He was the son of Abdullah Khan. GMK and his brother, Noor Mohamad Khan (NMK), arrived in British Guiana (BG) from Dir in Swat, Afghanistan, in 1877 on the King Arthur. The single grave at the Queenstown Masjid could very well be the burial place of his brother, NMK.

During his time in Guyana, GMK became a silent activist and leader to preserve the welfare of his community. He and his brother after arriving in Guyana joined the Guyana police force. Later, he was appointed as an official by the colonial government to India to manage vessels going back and forth. Quickly, GMK and a small Afghan business community founded the QJM. He and his family travelled regularly between Guyana and Peshawar immigration records show. His descendants in Guyana, Pakistan, the Persian Gulf, Canada, the United States and elsewhere are today still connected.

From about 1880 to the end of the 1900s grew a strong Afghan community in Georgetown. They advocated for cultural rights. They were concerned about their future generations in Guyana living under colonial cultural suppression, and lack of religious infrastructure. He saw the need for a mosque and a Muslim School. GMK tried to convince the British authorities that it would benefit the government if the immigrants stayed.

A petition of the combined Court of 1896 revealed a  group of “Mahomedans merchants from Georgetown led by Gool Mohumad Khan, Goolam Ally, Goolam Aidin, K. H. Dharsee, Kareem Baccus, and a few others of the “Mussulman” faith sent a petition to the British government to build a mosque in the capital. It did not happen; they received no money but were able to raise funds themselves to fulfil their goals. They were some of the early nation builders. (Petition of 1896 Combined Court). GMK was also the author of the book, “Unity Vs. Trinity.”

The Afghans are generally noble people with a heart full of hospitality, honour, valour and loyalty. While other people are breaching the border of Guyana seeking refuge or being trafficked to get to the USA or Cayenne, radical voices are already saying no to the Afghans when they did not even ask to come to Guyana.

Afghanistan got to where it is today because it has been confronted with wars from all its more powerful neighbours and empires like the UK, Russia and the United States of America.

The Burka had been there but it was a tolerant and caring community. We can’t use the rubric of the Burka to judge the entire people.

Were they not all Saudis who blew up the Twin Towers?

They were not Afghans.