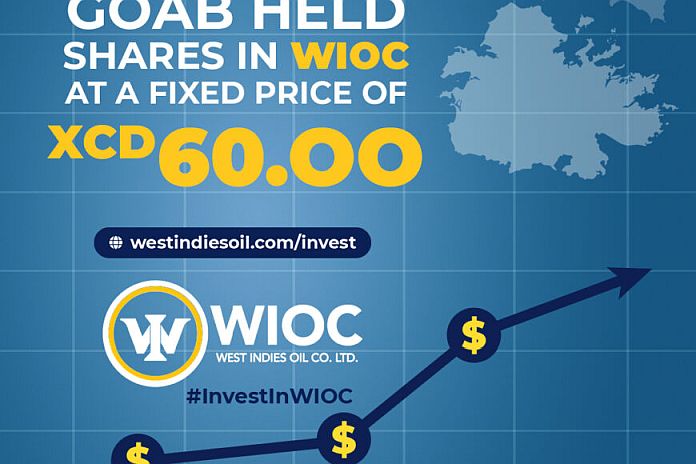 ST JOHNS, Antigua – The Government of Antigua and Barbuda (GOAB) announced that it will divest ten percent of its holdings in the West Indies Oil Company Limited (WIOC) commencing  March 24, 2021.

This amounts to 301,920 ordinary shares. Fifty percent of the offer is reserved for public servants and the remainder for other citizens and institutions of Antigua and Barbuda, OECS and CARICOM in that order of priority. Where the offer is not fully subscribed according to the outlined preferential tiered order, the Offeror reserves the right to transfer the shares on a first-come, first-serve basis.

WIOC is an Antiguan company with a regional presence in the energy sector. Its principal activity of business is the sourcing, marketing, distribution and storage of petroleum products. WIOC was established in 1965 by Natomas and Amoco International Oil. The GOAB, a minority shareholder in WIOC since 1980, gained controlling interest in the Company in 2015, and currently owns fifty-one percent of the shares.

The GOAB is expected to raise approximately EC$18 million to be utilized to fund a number of its critical capital projects.

“For over 50 years, the West Indies Oil Company Limited has continued to grow, generating profits of over $26 million in 2019. By going public and offering shares in WIOC, our government is providing the opportunity for Antiguans and Barbudans to build wealth, secure retirement, diversify investment portfolios and build a secure financial future for your children. The management and staff of WIOC have demonstrated their capacity via the profitability and sustainable growth of the company. With the future of WIOC looking very bright we invite citizens of Antigua and Barbuda to seize the opportunity to become a part of the ownership of WIOC. My government believes that an investment in WIOC will be an investment in your family’s future and the development of our nation’s economy.” said prime minister Browne.

Gregory Georges, chief executive officer of WIOC commented that the board of directors, management and staff are committed to successfully guiding WIOC’s strategy with the goal of creating value for their shareholders and all stakeholders, in particular, its customers and employees in the communities in which it operates.

“Over the past 50 years, WIOC has emerged as a strong and stable company, playing an integral role in the lives of the people of Antigua and Barbuda. The dedication, professionalism and experience of our management team and employees, their commitment to the core values, mission and vision of the company, are evidence of our continued growth and expansion.”

The offer is subject to the laws of Antigua and Barbuda, specifically the Securities Act 2001 and the Companies Act 1995.