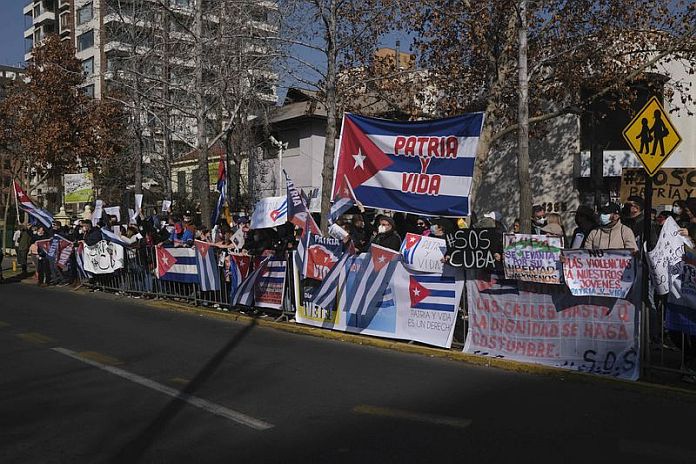 Statement by the Embassy in Santiago, Chile, translated by Comrade Peter Lansiquot in Saint Lucia.

CASTRIES, St Lucia – To the members of the Cuban Solidarity Movement in Chile, and to all Chileans of goodwill. The Cuban Embassy was attacked yesterday. The deployment of Carabinieri and public order control officers was unable to prevent the fascist hordes mobilized by terrorist organizations and national parties, such as José Antonio Kast’s Republican Party, from attacking and stoning the embassy.

On the front lines, defending the Cuban diplomatic headquarters, hundreds of members of the Cuban Solidarity Movement, resisted the attack, at the cost of seven wounded comrades. The unusual aggression was consummated right before the eyes of the aforementioned police forces, which only ended with the brutality of the fascist mob, when it had already consummated the aggression, after 4 o’clock in the afternoon.

It is our duty to inform you that such excesses were energetically denounced to the Chilean authorities.

Cuba accuses the United States government of orchestrating and financing the campaign unleashed against Cuba, taking advantage of the effects caused, firstly by the criminal blockade, a true war that attacks the Cuban people and persecutes and sanctions businessmen and banking entities that have ties with Cuba, among other acts of banditry, and due to the scourge of the pandemic, which has caused millions of infections and affected innumerable victims throughout the world, and in no case has a malicious and impudent campaign been launched for a “humanitarian corridor”, with a technological and financial barrage capable of flooding and poisoning the world’s social networks within just a few hours.

Of these interventionist maneuvers of “humanitarian aid” there are enough examples, which only cause chaos, desolation and the destruction of entire countries. In the case of Cuba, it intended and intends to create ungovernable conditions to justify a military intervention. And for the Cubans of Fidel and José Martí, those imperial plans are already more than six decades old, we know them very well and, as in the latter case, we are prepared to defeat them, as before.

In Cuba, to the frustration of the imperialists and others, there is normality, and all the institutions function in the face of the pandemic, advancing in the vaccination of the population and demonstrating to the world that Cubans are a people of unity and struggle, of determination and resistance, of true popular essence that, we recognize, is incomprehensible to some, including Chilean national political parties that made a mistake in their evaluation of the events, out of sheer ignorance, which really should not be happening to them at this point, or, for purely ideological reasons.

To all the comrades of the Solidarity Movement, to those who were wounded by the fascist hordes, our appreciation on behalf of the Cuban people for such a firm and dignified attitude, for the similar support and consequent Solidarity shown over the decades, towards the Cuban Revolution, Fidel, Raúl, Che, Diaz-Canel, the Cuban people, denouncing the criminal blockade, pooling resources to buy syringes, asserting Marti’s apothegm: “Homeland is Humanity.”

US – Cuba normalization could increase production of COVID-19 vaccines