BRIDGETOWN, Barbados – On January 21, US Secretary of State Michael R. Pompeo will travel to Kingston, Jamaica. While there, he will meet with prime minister ‎Andrew Holness, conduct a multilateral roundtable discussion with Caribbean leaders, and deliver remarks on US Caribbean relations.

However, Barbados will not be in attendance, said prime minister Mia Amor Mottley and will not be sending foreign minister Senator Jerome Walcott, she announced on Saturday evening at a gala to celebrate the centenary of the birth of The Right Excellent Errol W. Barrow.

“We will be friends of all and satellites of none”, prime minister Mottley reminded the audience of the late National Hero’s famous statement, emphasising that “little did he know that that statement would be embraced by every single prime minister of Barbados that succeeded him.”

“It is as valid today, perhaps even more so than it was at the time of its initial delivery. And I say so, conscious that principles only mean something when it is inconvenient to stand by them.

“Conscious that this region must always cheek itself to ensure that we do not become the pawns of others, the satellites of others, but that we keep every most and uppermost in our minds what we must do for our people without simply becoming pawns on a chessboard for others to be able to benefit from,” she said.

“We don’t look to pick fights. I don’t look to pick fights, but I am conscious that if this country does not stand for something, then it will fall for anything. As chairman of CARICOM, it is impossible for me to agree that my foreign minister should attend a meeting with anyone to which members of CARICOM are not invited. If some are invited and not all, then it is an attempt to divide this region,” Mottley said.

“It didn’t take a lot of thought as to what our decision should be because this country does not pretend to be what it is not and does not pretend to have that which it doesn’t. But it does aspire to be sincere, and to be correct, and to be moral, and to be principled,” Mottley explained, “… similarly the understanding that we shall not loiter on colonial premises or loiter on any premises where we are not wanted continues to be as relevant today as it was then.” That is the Barbados first to which I speak,” prime minister Mottley said.

March 22, 2019, a gang of four CARICOM leaders were criticised for meeting with US president Donald Trump at Mar-a-Lago in Palm Beach, Florida.

Prime minister Dr Ralph Gonsalves of St Vincent and the Grenadines took issues stating that the meeting was not in line with the agreed mechanisms recognised by CARICOM, while Antigua and Barbuda prime minister Gaston Browne, was asked whether the meeting signified ‘diplomacy or bribery’? 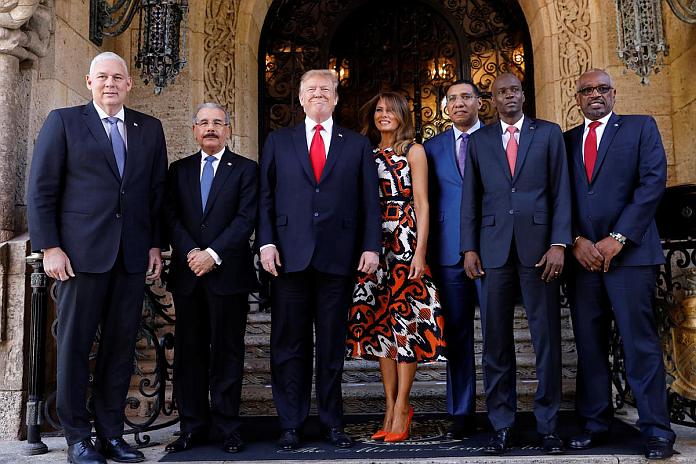 At that meeting, president Trump promised that a high-level delegation from the Overseas Private Investment Corporation, a US government agency that helps American businesses invest in emerging markets, would visit their nations in the next 90 days.

Today as it was then, the Trump administrations is pushing a strategy of sanctions and other measures of regime change in Venezuela, and “counter China’s predatory economic practices,” in the Caribbean.