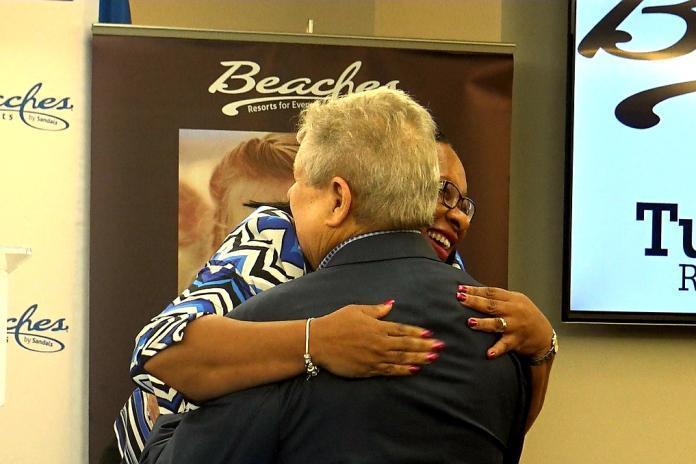 PROVIDENCIALES, TCI – Beaches Turks and Caicos has reportedly “taken the decision to postpone the re-opening date until April 2, 2021,” according to communication sent to premiere Sharlene Cartwright-Robinson, leader of the opposition Washington Misick and governor Nigel Dakin.

This has not been officially announced to the public, who will be affected by this decision. Beaches employs over 1,400 persons, 900 of whom are from the islands.

Sources indicate that this consequently makes a clear statement that they will not reopen until after general elections in Turks and Caicos and a new government can address its concerns in parliament, outside the glare of an election season.

Nevertheless, sources also indicate that it will likely be until June 2021 that the resort may open its doors – since any negotiation with the government has to be approved in parliament.

The failure of the finance minister Sharlene Cartwright-Robinson to arrive at a settlement with Beaches has threatened the restart of the economy with major airlines cancelling flights and other resorts which depend on Beaches airlift to meet their capacity. The outlook has turned grim on the premier right before the all-important general elections season kicks off.

Information reaching Caribbean News Global (CNG) cites the $100 million-plus dispute as being the cause for the impasse between the entities. On the one hand, Beaches was denied in letters from TCIG its rights to claim from the government overpayments for children under 12 in addition to other overpayments; while TCIG is seeking to enforce 10 percent, per month, penalty on alleged unpaid principal sums it claims Beaches is owed due to a ‘miscalculation’ on the accommodation tax.

Beaches has denied any non-payment of tax while TCIG has admitted that Beaches is entitled to a refund on at least some portion of the tax overpayments. Beaches has sued TCIG exposing the government to a $150 million liability if Beaches prevails.

Beaches communicated to TCIG on November 9: “In light of the very significant costs involved in re-opening Beaches, and the unresolved issues that remain to be addressed, the Board of Directors has taken the decision to postpone the re-opening date until April 2, 2021. We will be advising the travel trade accordingly.”

Last year January 30, 2019, according to the Jamaica Observer, the premier and minister of finance of the Turks and Caicos Sharlene Cartwright-Robinson had promised to settle the dispute with Beaches although this attempt has now failed.

“My ministry has been addressing a long outstanding issue with Beaches and my government and I are confident that with the facts in full view, we can bring an end to a critical outstanding matter that has seen its basis in an arrangement in place since the resort’s operation started in the 90s and existed throughout every government in the TCI since then,” Cartwright-Robinson said in a statement. […]

“I implore those void of facts to resist casting wild accusations and unwarranted attacks on elected and public officials as well Beaches Resort itself. I wish to thank those in the public service, especially my PS [permanent secretary], the PS of finance who brilliantly crafted the most appropriate solution at the very outset, all other public officials (the AG’s Chambers and Revenue Control Unit) who assisted in getting us where we are now and Beaches (who continues to be a valued and valuable partner in these islands) for the progress we have made thus far towards resolving this matter,” Cartwright-Robinson added.

Beaches Resorts operates the all-inclusive resort for families in the Turks and Caicos Islands, Negril and Ocho Rios, Jamaica.

Beaches previously stated that: “No investor, and in particular Beaches, wants to be involved in court proceedings with a host Country. However, given the gravity of certain fundamental breaches of our Development Agreement(s), such as provisions relating to the payment of the Customs Processing Fee, Beaches had no choice but to protect our legal and constitutional rights by filing a lawsuit against the government of the Turks and Caicos Islands, which is available to the public. This occurred in May 2019.”

Related: Beaches is not asking TCIG for any favours or special treatment …

UK foreign secretary to set out relationships with Singapore – Malaysia