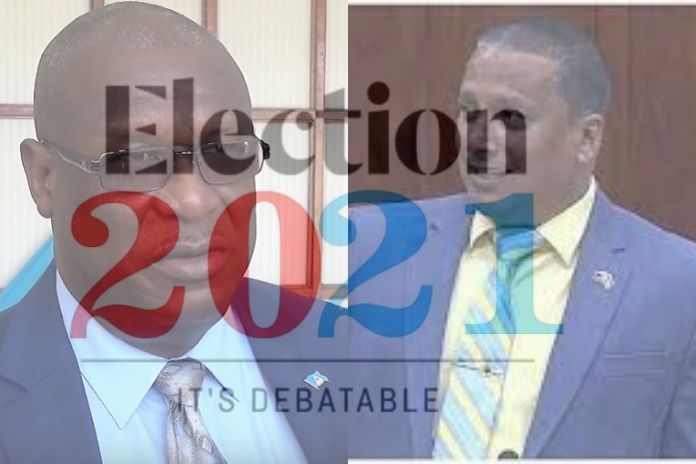 Friday, July 16, reaffirmed that you never know exactly how many candidates will finally be contesting a general election until after nomination day, as that’s when all who want to run for a seat have to finally submit the paperwork for registration and meet the stipulated requirements, failing which they can be disqualified – or, as we prefer to say in the Caribbean, Crappo smoke their pipe.

Independents, in particular, tend to bide their time and ride the tide until the last minute – like Stephenson King did on July 8, three days after the long-awaited polling date was announced to be held in just 21 days, to benefit from the bigger ‘element of surprise’ offered by that small window of opportunity.

Same with not-so-new ‘Independent-Green’ candidate Melanie Fraites, described in the news on the night before nominations day (Thursday evening) as ‘a third candidate for Micoud South.’

The brave lady, who counted less votes than fingers on her last such outing, this time-shifted her gaze to another constituency where her chances of willing maybe even less fingered.

Madam Fraites has thrown her gauntlet to none other than the top gladiator every other has targeted, prime minister Allen Chastanet, the political leader of the ruling United Workers Party (UWP) – and Gubion Ferdinand, the Saint Lucia Labour Party (SLP) challenger.

But she’s not standing alone. Like SLP’s strategic alliance with the campaigns of independent candidates Stephenson King and Richard Frederick that saw the SLP deciding to tactically contest in only 15 of the 17 seats; the Green Party announced it too had reduced its shorter list from nine to eight, to allow the lone lady ranger to alone freely take her fight to the UWP’s leading light.

She (and others before her) were also making clear and definite statements of encouragement to other women not to be afraid to take the political plunge (independent and alone) to offer themselves for representation, no matter how deep the pool of risks.

Indeed, several women have travelled that route of ‘just making the point’, including another admirable lady who, ahead of the last national poll, told the press she was nursing the intent of becoming ‘Saint Lucia’s first LGBT candidate’.

I didn’t see her name among the listed candidates for 2021 registered on Friday, but I did tell an inquiring friend that if she’d ran in 2021, she would still have gained the fame, but the descriptive prefix, handle or label for her record-busting national achievement would have been literally and laterally expanded this year to ‘Saint Lucia’s first LGBTQIA elections candidate.’

This being the season when we normally think and act silly, rather than welcome the fact that the young ‘Independent Green’ had summoned the testicular fortitude to challenge the leader of one of the two major parties in a seat still considered ‘unwinnable’ by anyone outside the UWP, most of the cheap talk has instead been about how ‘She only got eight votes in Castries Central last time…’.

And that was not all

The news item announcing her intent did say the good lady was associated with the previous Green Party (this one in its previous life).

But one of my fouyaya (deeply inquisitive) friends’ interest was more in ‘whether she prefers to support a green leaf than a green cow…’ Here again, rather than see that the gutsy lady may also have been inspired by the real fact that the UWP has already once lost what is still considered ‘Sir John Compton’s sacrosanct Micoud South seat’, in his lifetime, and hers.

Interestingly, none of the women I’ve spoken to about the final candidates’ list noted there are ten women candidates among the 45, spread across the three parties, including a lone independent.

It’s two less than a third, but more than the 25 percent being recommended to parties for their candidate lists, to try to ensure women comprise at least 20 percent or a quarter of national parliaments.

The likes of Beryl Balboa Edwards, Heraldine Rock and Frances Michel – women who blazed the political trail and radically broke the traditional elections monopoly in the 50s, 60s and 70s – would have applauded the likes of Fraites today.

Last Wednesday and Thursday, all potential candidates had their officers and lawyers engrossed in the legal and administrative paperwork and perusal involved in preparation for nomination, including safely gathering and arranging transportation for the number of registered voters from the given constituency required to accompany the wannabe candidate on nomination day.

Not surprisingly, some rival candidates arranged non-hostile Yellow-and-Red, Green-and-Blue clashes at nomination centers, with the same carnival-style revelry and gay abandon featured during last weekend’s island-wide UWP motorcade and those restricted to constituencies.

Registration and nomination were the usual tiring and trying process for newcomers, some of who had the chills of having had to quickly correct and rectify with some fine points in fine print in the related law and procedures that either missed their eyes – or vice versa.

The final candidates list was not that surprising, but it did feature – for the first time – ten women; and less seats being contested by two candidates, with more by three-and-more: seven with two, nine with three and Castries North with four contestants.

On Saturday morning the parties (and independents) were apparently still perusing the official final list of candidates, in most cases seemingly seeking nothing more than what they just might discover they may have missed.

For example, one candidate lady friend called (very early) Saturday morning to ask a big question: ‘Can a minister of religion be nominated?’

I almost offered her the typical Lucian-branded response: ‘How is me, uh?’

But the question twisted the ears of the journalist in me, so I prodded her on instead.

I replied with another question: ‘What do you mean?’

More than just a brave rookie in the hardball of local politics, she said: ‘As if to me, I saw in the law something that says something like a minister of religion cannot be nominated, so I was wondering how come that guy was nominated?’

She didn’t say a name, but to the Popeye in my mind’s lighthouse, the question did ‘Shiver me timber!’

I pressed on: ‘Have you checked it out?

Miss Candi (as in candidate) recalled ‘hearing in the news’ that he was ‘preaching on a pulpit’ when an incident happened in which the police and the church elders ultimately got involved…’ She sounded like she had a point, but the common-law layman in my head loudly warned me to be equally careful about her very careful wording.

I told her: ‘It all has to do with definition and interpretation of the said words.’

I recalled that the late Senator Elijah ‘Eli’ Greenidge had reluctantly turned down an invitation by George Odlum to contest as a Labour Party or Progressive Labour Party (PLP) candidate in the 1980s because he was a minister of religion, thus restraining his political platform activity to opening public meetings with prayers.

I thus added (in my best legalese): ‘I would also have expected that in such cases something like a Statutory Declaration would have had to be made by all nominees to the effect that I am not a minister of religion.’

I also assumed that if the law outlaws it and a nominee is approved who is proven to be a minister of religion, that could open a big can of dirty legal worms, including an injunction, at some point or junction.

Surprises there were, some more surprising than others, but most less than expected.

The shortlist included: The Lone-Ranger Lady Lancelot in Micoud South, ten women candidates, absence of the LGBTQI candidate, the much-ado-about-nothing regarding ‘Independent Labour’ candidates, the Blue phenomenon, a fourth candidate for Castries North, the greater candidacy competition in most constituencies and the varying degrees of tactical and strategic alliances – all were preceded by red-ticket primary Independent Labour Dr Alphonsus ‘Ray’ St Rose’s withdrawal of his candidacy via campaign ‘suspension’ and followed by a familial medicinal and doctoral namesake being nominated as a Green Party candidate vying for the same (Choiseul) seat.

But none would have red-ticket Independent Labour outshone the nomination of a minister of religion if that were true. I would have told that to Miss Candi, but she didn’t sound ready for that big a hot potato.

So, I too let that rest – and just treated it as perhaps ‘The Big nomination day surprise that we all might have missed!

Meanwhile, with just one week left before Saint Lucian voters cast their ballots on the candidates’ fateful Judgment Day, the island’s streets and roads, highways and byways – even pathways – have become long, outlined outlays of flagpoles flying the yellow, red and green flags of the three parties contesting, with blue-yellow-and-green in Castries North and red-yellow-and-green in Castries Central.

As we drove through Castries Saturday afternoon, my fellow-writer friend noted: ‘If flags could talk, they’d really tell us who’ll win on July 26.’

Knowing he was simply baiting me with a bare hook, I held on to my line and sinker – and didn’t at all bother to tell him how happy I was that Silence is Golden!