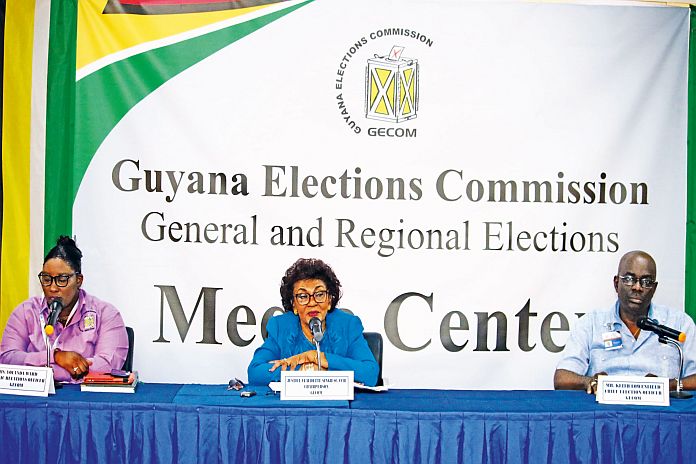 GEORGETOWN, Guyana – Numerous calls for within the region and externally continues to call on Guyana that ‘Caribbean democracy demands the rule of law to prevailed and that a new government must be declared and installed’ following the March 2, 2020 general elections.

“Political chaos is inevitably corrosive to a country’s economic goals. But insulating Guyana’s burgeoning oil industry from politics would go a long way towards making sure that the country becomes a poster child for development, not a cautionary tale.”

The following is statement from CARICOM chair, prime minister of St Vincent and the Grenadines, Dr Ralph Gonsalves:

“Indeed, the CCJ in the summary judgement aptly stated: “It has been four months since the elections were held and the country has been without a Parliament for well over a year. No one in Guyana would regard this to be a satisfactory state of affairs. We express the fervent hope that there would quickly be a peaceable restoration of normalcy.”

“Accordingly, the Court’s ruling should lead to a declaration by the Guyana Elections Commission (GECOM) of the results of the General and Regional Elections held on 2 March 2020, without further delay.

“CARICOM commends the continuing patience and calm of the people of Guyana and calls on all stakeholders to respect the rule of law.”

Professor Sir Hillary Beckles, the current Vice-Chancellor of The University of the West Indies issued the following statement:

“Sometimes it requires a personal rather than a political or professional perspective to see beyond the borders of a seemingly divisive circumstance and to offer a dispassionate comment. I was named by my father after his cousin, Hilary Alfonso McDonald Beckles. “HAM Beck”, as he was called, was little known in our native Barbados, but his contribution to nation-building in Guyana is well respected. In the late 1940s, he fled “Bim” for “BG”. He taught classics for near three decades at Queen’s College in Georgetown, where he also became principal.

“His commitments to Guyana straddled the diverse ethnic and cultural scene. He married an Amerindian woman and considered himself a research authority on Hindu culture and Indian civilization. He admired the colony’s ethnic diversity and adopted the new nation of 1966 as his home. Supporting the nation’s dream for democratic development and the equality of ethnicities was his personal quest.

“Through those eyes, I came to embrace the wonderful land of a thousand rivers. I know something of its history and culture, including the good and the bad times evident in its turbulent journey to and beyond nationhood. It has been a torn and tortured terrain with divisive seeds sown in the colonial waters that nurture the rich land.

“The determined evidence of the debilitating deployment of ethnic identity as expressions of indigenous nationalism can be seen in far too many places. But, above it all, there is also the compelling story, in the history from sea walls to sugar estates, of commitment to the paramount principle that the will of the people should not be toppled, but respected.

“The people have spoken. And so has the highest court. From the 2019-2020 electoral campaign and franchise exercise, their will is now known. With much pain and sacrifice, the process has been monitored and reviewed by CARICOM. The findings of the outcome should be declared and implemented. There is no other option that will be acceptable to the region and wider world. The future of the nation is assured with the compliance of State to the popular will. The regional court is counting on the integrity of the polity to protect the democracy.

“Fear of the future is not an acceptable explanation for franchise frustration in the present. Ethical conduct, and not ethnic constructs, is expected to rule when democracy is in need of advocacy. The children of indigenous survivors, the chattel enslaved, the deceived indentured, and others in between must now converge at the rendezvous of victory. The minority party should stay the course and continue to contribute to the sustainability and maturity of the integrated, multi-racial nation.

“In this regard, despite the challenges of late, the nation has much to teach its region and the world beyond. This year is the 40th anniversary of the violent taking of Walter Rodney’s life. It was forfeit because of the socially and politically integrated values he held most dear. He was from that generation of outstanding Guyanese scholars nurtured by HAM Beckles.

“I join with the current and past Heads of CARICOM, the Honourable Ralph Gonsalves and the Honourable Mia Mottley respectively, and with the former Prime Minister of Barbados, the Honourable Owen Arthur, in calling for the official embrace of the evidentiary truth of the election. Every hour that the celebration of a new day is allowed to sour, the greater will be the tarnish on the varnish of the history of a great nation.”