Have you noticed the number of homes that are on the chopping block right now because those families haven’t been able to pay their mortgages? Do you realize that since the crash of 2008/2009 that there are some people yet to find a job?

Coincidence? I think not. Do you think that Victor Banks cares?

If one didn’t know better, one would think that this is some grand scheme cooked up by the Brits and our own government to put the arrogant Anguillian in his place once and for all. And how better to do this than to depress the economy or just do nothing to improve it to where he can’t get a job to support his family?

Naw, the British would do that to us, their loyal citizens. Would they? Heck yes, they would. The evidence is there. They have successfully re-colonized us, contrary to the United Nations resolution 6543 to decolonize. They have put in place, in key positions, their own people to run the Anguillian government. What does that say about us? They allowed our banks to fold, unlike the ones in England. They condone the ineptitude of our present government until such time that they will have no choice but to come in and rescue us from ourselves.

You take away a people’s access to capital, and what do they have left? They can’t start a business, send their kids off to college, they can’t do anything. Am I getting through to you?

I know that our former chief minister Hubert Hughes famously said, “If you want Anguillans, to not know something put it in the papers because they don’t read.” Well, you know what; we have not done anything to disprove the former chief minister. If we are ever to be enlightened, we had better damn well start reading, for knowledge is power. We are no longer on the plantation. A new day has dawned, and we can’t afford to let the sun catch us napping.

Remember, Queen’s Counsel Charles Wilkin admonished us a while back in his book “Breaking the Cycle.” Of a democracy, he said: “It is not an election every five years but an everyday process. It requires open and accountable governance and that the people be properly informed on what the government is doing in their name. It requires that the people be conscious of their rights and of the obligations of whose whom they elect; that they speak out against abuses of power and against the secretive behavior of their leaders; democracy should never be taken for granted.” And yet here we are allowing our government to do whatever it wants ad infinitum.

The Bible says God helps those who help themselves. I am not suggesting nor am I implying that we all are not trying to help ourselves. Anguillians have always been a proud people who, when everyone forgot us, had to fend for ourselves, and I might add we did one heck of a job.

When no one would come to our shores, we built our ships. When the airlines stopped coming, we created our own. At one time or another, an airplane bearing Anguilla’s insignia was touching down on someone’s airport. We were the envy of the Caribbean for our banks, our social security program, and our overall ingenuity. No longer were we the butt of anyone’s jokes. We were the gold standard.

Thanks to a global economic crash and incompetent leadership, we are now struggling to keep our heads above water.

Anguilla’s 2020 election is essential to finally correct the incompetence, the greed, the nepotism, the cronyism, the lack of vision and everything else that ails us. Banks and his cronies, in cooperation with The Foreign Commonwealth Office (FCO) and Lord Ahmad have stacked the decks where he will be guaranteed re-election and that my people are a scary thought.

If we are to survive as a people, we have to come together as one. No Anguilla United Movement (AUM) and certainly no Anguilla United Front (AUF) no nothing, just plain old Anguillians concerned about our country. We can’t afford infighting, party politics and self-centeredness, for in so doing; we are playing right into the hands of Victor Banks and the British government. 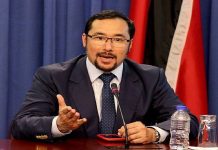