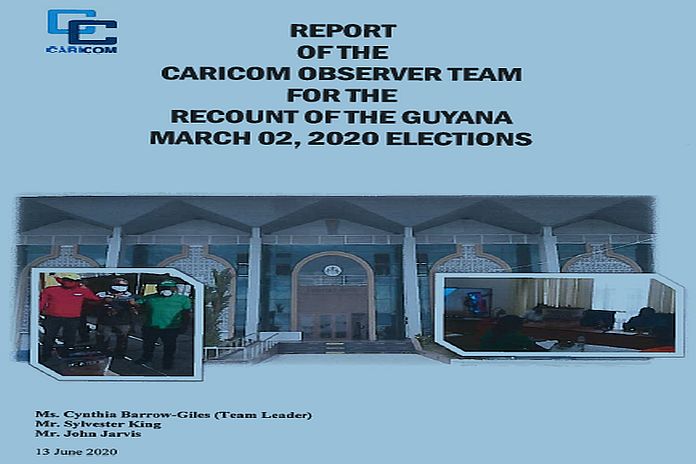 GEORGETOWN, Guyana – The three paragraphs quoted below from the CARICOM Scrutineers on the Recount of the votes of the Guyana elections of March 2, say all that needs to be said.

Overall, while we acknowledge that there were some defects in the recount of the March 02, 2020 votes cast for the General and Regional Elections in Guyana, the team did not witness anything which would render the recount, and by extension, the casting of the ballot on March 02, so grievously deficient procedurally or technically, (despite some irregularities), or sufficiently deficient to have thwarted the will of the people and consequently preventing the election results and its declaration by GECOM from reflecting the will of the voters.The actual count of the vote was indeed transparent. (page 5)

The team notes that there were some irregularities at the 2020 elections which were revealed through the very transparent national recount, but none of these irregularities and shortcomings are sufficient nor substantial cause, to call the 2020 results into question. Yes, the recount suggests that the poll was far from perfect but the imperfections cannot deny that the elections and therefore the recount were reasonably credible.  We were impressed with the relative orderliness which generally characterised each day’s activities at the recount centre. (page 59)

We are, however, of the unshakable belief that the people of Guyana expressed their will at the ballot box, and as a result, the three person CARICOM Observer Team concludes that the recount results are completely acceptable. (page 60)

Caribbean Export – UWI to partner on trade and investment