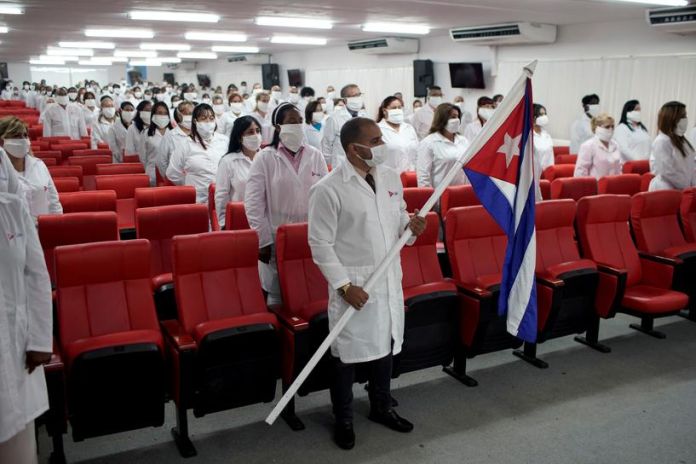 HAVANA/LOME (Reuters) – At the start of Togo’s coronavirus outbreak, the small West African nation welcomed a team of 12 Cuban healthcare workers to tend to sufferers of the virus, boost its laboratory testing and help improve its hospital protocols.

While the virus was overwhelming healthcare systems worldwide, the Communist-run Caribbean island boasted a rare resource: a surplus of doctors trained in deploying abroad and battling infectious disease.

And it was willing to dispatch them all over the globe to nations requesting help.

“As scientific and medical circles groped in the dark, Cuban medicine, strong from past experiences, brought appropriate answers,” said the head of cooperation at Togo’s foreign ministry, Charles Azilan.

Nearly 40 countries across five continents have received Cuban medics during the pandemic, as the island nation – home to just over 11 million inhabitants – has once more punched far above its weight in medical diplomacy.

Since its 1959 leftist revolution, Cuba has dispatched its “army of white coats” to disaster sites and disease outbreaks around the world in the name of solidarity. In the last decade, they have fought cholera in Haiti and Ebola in West Africa.

Not that its brigades are purely altruistic. Cuba has exported doctors on more routine missions in exchange for cash or goods in recent decades, making them its top source of hard currency.

While some countries have received the medics for free during the pandemic, others are paying: a slight boon to Cuba’s economy struggling with the coronavirus-induced collapse in tourism.

Togo’s government, like many others in the past, has praised the brigades as an example of south-south cooperation, calling it a “turning point” in their relations.

Yet even wealthy, western nations like Andorra and Italy have welcomed Cuban medics to help fight the pandemic, as have countries that are not politically aligned with Cuba, such as Peru.

The success of the medics has been a setback for the administration of US president Donald Trump, which launched an unprecedented campaign against Cuba’s medical missions in recent years, citing what it calls their exploitative labor conditions.

Havana dismisses the US attacks as ideologically-driven.

Cuba experts say while some of the US criticism was legitimate, it ultimately aimed to strangle the island’s economy to foment change and woo anti-Castro voters in the swing state of Florida ahead of November’s US presidential election.

But Washington was “almost totally isolated” on its Cuba policy, said Paul Hare, a former British ambassador to the island who lectures at Boston University’s Pardee School of Global Studies, while its “America First” strategy contrasted unfavorably with Cuba’s medical diplomacy.

Several Caribbean nations complained for example in April of US customs blocking shipments of medical supplies to them even as the region was welcoming hundreds of Cuban doctors.

With financial aid from its former ally the Soviet Union, Cuba built up a healthcare system that was the envy of the developing world under the leadership of the late Fidel Castro.

Some of those advances have been lost since the communist bloc collapsed. Many hospitals are run down, medicines are in short supply and Cubans complain about a decline in the quality of medical training.

Still, Cuba has one of the highest ratios of physicians per capita in the world and even before pandemic struck, had some 28,000 medics deployed globally. It has since dispatched a further 4,000.

“They are lifesavers,” said Ralph Gonsalves, prime minister of Saint Vincent and the Grenadines, and chairman of the Caribbean bloc CARICOM. “In some Caribbean countries, they constitute the backbone of the response to the pandemic.”

Jamaica for example welcomed 137 Cuban doctors in March, in addition to the 296 already practicing there.

“Without them, it would have been very much harder for us,” said Jamaica’s chief nursing officer, Patricia Ingram-Martin.

Host countries say they have sought to learn from Cuba’s handling of the pandemic back home: isolating cases, tracing their contacts, screening for sufferers and swiftly applying therapeutic treatments like the antiviral agent interferon.

Cuba has reported just 4,684 cases and 108 deaths so far: a tenth of the global average per capita.

Many of the doctors on the frontlines of the battle against coronavirus in the global South are also graduates of Cuba’s international medicine school in Havana, which has trained an estimated 30,000 foreigners.

The Trump administration has denounced Havana for typically retaining 75 percent or more of what host countries pay for its doctors – likening the brigades to human trafficking.

The Cuban government compares what it retains to a tax that goes to funding its universal healthcare system.

Human Rights Watch has also criticized what it calls repressive working conditions including Cuban doctors being banned from returning home for eight years if they defect.

Conservative governments in Brazil, Bolivia and Ecuador have ended their agreements with Cuba in recent years, amid allegations in the latter two countries that the doctors also interfered in domestic politics – charges Havana denies.

A US State Department spokesperson told Reuters it applauded those countries as well as nations like Barbados that sought to ensure Cuban medics receive direct payments and rights guarantees while working there.

Cuban doctors told Reuters that while they would like better conditions, the missions allow them to earn significantly more than their $70-$100 monthly salary at home.

Sending home the doctors, many of whom work in remote, poor regions which struggle to attract local medics, comes at a cost, particularly to the most vulnerable, analysts say.

Brazil, hard hit by the pandemic, has re-hired 1,012 Cuban doctors who elected to stay in the country, allowing them to work in basic primary medicine for two years without having to requalify to practise.

Just four have been re-hired in Brasilia, which used to have 70. Tania Ribeiro, a nurse in a poor neighborhood of the capital, said the Cuban doctors who had left were sorely missed.

“They were warm and charismatic. The patients loved them,” she said.

Carlos Dorado, director of a hospital in the northern Bolivian town of Guayaramerin, said it especially missed the Cuban doctor who had been its only intensive care therapist.

“Now we just don’t have one, although that’s what you most need with COVID,” he said.