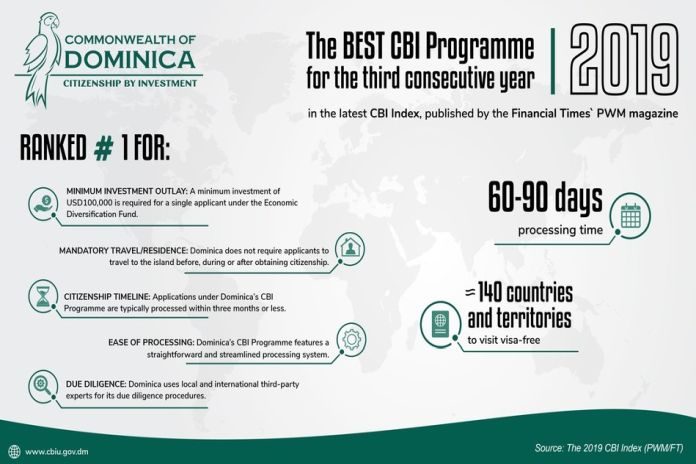 ROSEAU, Dominica, — Dominica’s Citizenship by Investment (CBI) programme has been awarded the number one place in the 2019 CBI Index, and the best country in the world to obtain economic citizenship from for the third consecutive year.

“Dominica has bounced back remarkably, inspiring confidence from world-leading brands rushing to open their hotels in Dominica”.

This was achieved by scoring full marks in five of the seven pillars against which programmes are typically assessed. Namely, Dominica excelled in terms of due diligence; ease of processing; citizenship timeline; mandatory travel or residence; and minimum investment outlay.

Dominica’s CBI programme was established in 1993 and offers reputable investors and their families the chance to acquire its valuable citizenship in exchange for an economic contribution. Alternatively, single applicants can make a one-off US$100,000 contribution to the economic diversification fund.

Property investors seeking second citizenship are buying shares in the real estate options eligible under the Dominican CBI Programme, starting from US$200,000, with an expected return on investment.

Financial Times’ (FT) experts stated that “Dominica’s real estate option has flourished”, while some developers on the island are announcing that they have already sold out of CBI-approved shares.

Demand for Dominican real estate is on investors’ radar as a reliable option, especially because many of the CBI hotels and resorts are already open or progressing on schedule.

The Cabrits Resort & Spa Kempinski, Dominica is the first government approved real estate project in Dominica under the CBI program.

Cabrits Resort & Spa Kempinski, Dominica is ahead of schedule to open in November this year and has recently been named “the most exciting new Caribbean property set to open in 2019” by the Caribbean Journal and Forbes.

Financial Times’ (FT) experts noted that Dominica is leading the way in terms of CBI integrity and accountability with respect to real projects for native citizens, so much so that European Union member states like Malta and Cyprus are said to be replicating the Dominican model.

“Dominica emerged once more as the country with the world’s best citizenship by investment programme, combining extensive due diligence with efficiency, speed, affordability, and reliability,” cites the source. It further highlights that “Dominica also set the record for the highest percentage score ever achieved on the CBI Index: 91percent”

“The government’s long-term strategy to effectively invest in climate resilience, healthy economic growth and ultimately focusing on improving the livelihoods of Dominicans across the island.

“This was possible by finding the right balance between investors’ expectations, international security standards and, most importantly, the impact the programme is having, directly or indirectly, on the people of Dominica.”

The 2019 CBI Index, published by FT’s PWM magazine notes that this should be, in fact, the “guiding principle” for all CBI programmes and that Dominica was the trendsetter of the year in this respect.

“Dominica’s [programme] is hugely important to its economy, helping mitigate the devastating damage wreaked by Tropical Storm Erika in 2015 and Hurricane Maria in 2017.” Two years later, tourism numbers are soaring, exceeding pre-Maria levels by over 11 percent.