Out in the cold, pitch blackness, witnessed by only the stars, the small, 20-foot boat with six men tossed and bucked in the rough seas.

They had left land secretly that night, watching the little light along the Bimini shoreline fade away fast, and with it any final choice of changing their minds, thinking of the short voyage ahead and the dangerous chances they were about to take, like countless others searching for the elusive better life, so far from home.

Bimini is the closest point in The Bahamas to the mainland United States of America. The chain of islands in The Bahamas westernmost district lies just 80 kilometres or about 50 miles east of Miami or West Palm Beach. Adventurous American anglers pop over all the time to fish in the Caribbean sunshine or enjoy a rum punch and the nightlife, since it is a quick trip in a nearly straight line of deep blue sea. 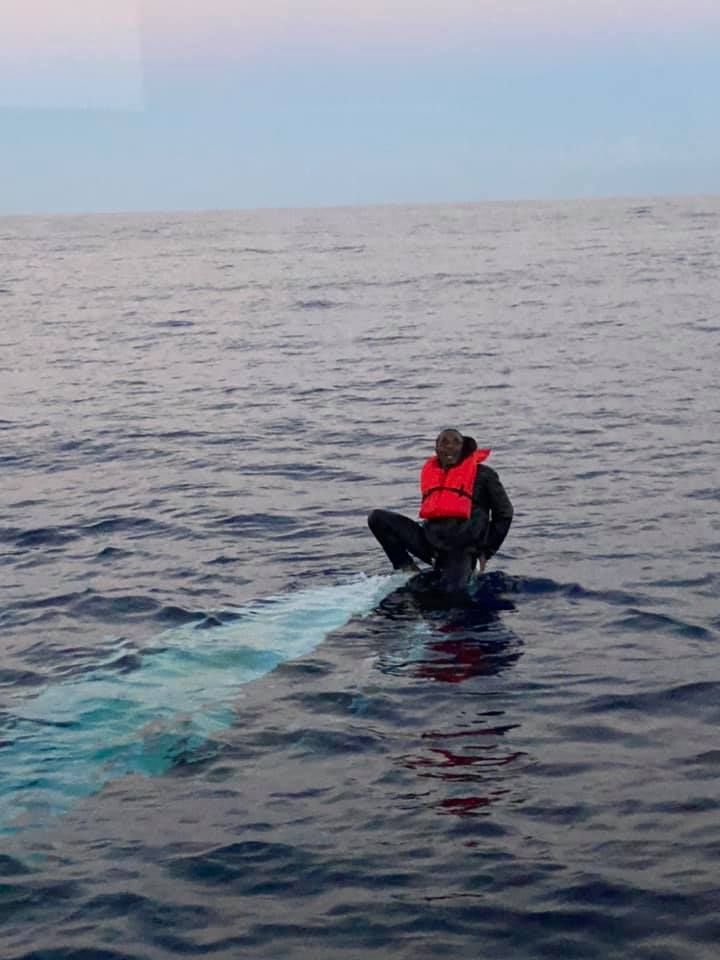 Watched by a waning crescent moon and his worried passengers, the indifferent Captain, who had made the profitable but notorious journey ferrying illegal migrants for thousands of US dollars several times before, casually finished his bottle of liquor, passed out drunk, and then – tumbled overboard and disappeared. He was the only one who knew how to operate the centre console boat.

In online chatrooms, seasoned sailors exchange harrowing accounts of the shocking six and seven foot-freak waves that come out from nowhere, towering and breaking above the bows of boats, navigating the weird Gulfstream eddies and mysterious seafloor drops. The lucky travellers punch through and end up with a drenching, a flooded cockpit and true, tall tales.

Vessel overturned by wall of water

On the Wednesday night of February 10, 2021, as the terrified passengers drifted in the darkness, a sudden wall of water overturned the unmanned vessel. Only three of the men could swim, so the few life jackets went to the three who could not. Believed to have been aboard, were at least three, likely four young Guyanese men who probably perished and so far remain unfound, devoted father, Kevin Sukraj also called “Davin” of Lot C 40 Block R Sophia, Greater Georgetown; his relative, Krishna Sukraj, and two friends Rayan Bhodoo and Anil Deonarine.

They had all travelled to The Bahamas from Guyana, on the same flight, in January, supposedly for a short vacation, but by February still had not returned to their South American homeland. In changing and confusing stories, grieving relatives claim that they had no prior knowledge of the men’s intentions to attempt the dangerous illegal crossing into the USA, stating the men’s passports were seized in a raid by Bahamian authorities, said to be Police. The “Police take foreigners’ passport (s) all the time and demands (sic) money especially if you are not legally in the country then turn u over to immigration,” a resident commented on social media below Bahamas coverage on the missing men.

Checked out of Motel

The Bahamas media revealed this week, that the Guyanese collected their documents before embarking on their sea journey. Kotekenya Rolle, the manager of the “Three Daughters” Motel in Bimini, related “those guys” never said they were Guyanese, but maintained they were “from New York.” She remembered, “They went up to the casino – they were partying while waiting for their passports to be returned by the police” and “The following day when we saw them again, they said they had already gotten (the passports),” she told Eyewitness News Bahamas. She said that they checked out and returned their room keys in the second week of February

The motel’s owner Steve Rolle affirmed that the men booked a room there in early February and paid on a daily basis but “they were trying to get into New York.” However, Kevin Sukraj’s family members insist, “We don’t know anything about that…” with a sister questioning, “Why would he now go to the US, This is not the first time he went to The Bahamas, why he now see fit to go to America? Why all the other times he didn’t go?” noting, “He loves his daughter, his daughter is his baby.”

The Bahamas foreign affairs minister Darren Henfield said his ministry had no formal complaint or report from the Guyanese government on the matter, the country’s media reported. 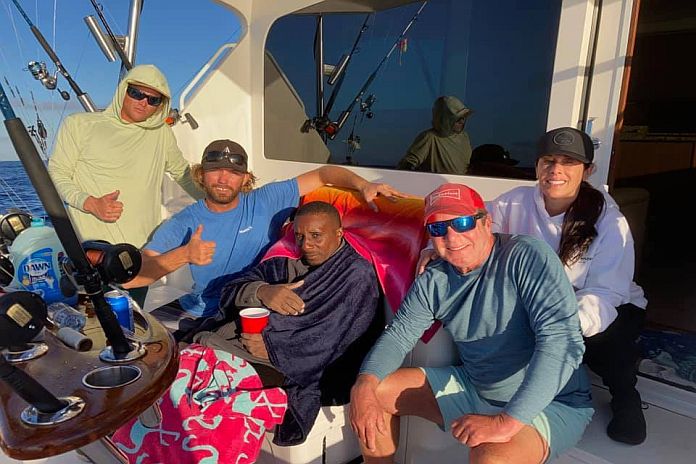 Disappear one by one

Across 36 hours, the sole survivor, Jamaican national, Orville Lyons, saw his new mates disappear, one by one into the Atlantic Ocean, overcome by exhaustion, Treasure Coast (TC) Palm media reported. The swimmers were the first to go. By that Thursday evening, only two remained. By dawn Friday, only Lyons was left desperately clinging to the drifting boat, bobbing just under the surface.

“(I) Cleared the inlet before sunrise this morning to chase blue marlin. Shortly after first light in 500’ of water, I got a solid return on my radar 3/4 of a mile off my port side. I slowed down to take a closer look and found this guy clinging to his capsized boat. He had left Bimini with six others in (an) attempt to make it across to the States when the boat capsized…Wednesday night,” Captain Cornell wrote in a Facebook post.

He said in interviews, “In the silhouette, I see the guy’s hand come up, and he starts waving at me,” terming the encounter surreal. “I didn’t know what to do other than start screaming, ‘There’s a guy in the water up there!’”

Lyons, in a red life jacket, and unable to swim, had no strength left, the Captain recalled, posting, “He was in the water for (some) 40 hours before we found him and was the last survivor. We tossed him the life ring and got him onboard. He was hypothermic and dehydrated. We wrapped him up in blankets and put him in front of the engine room companionway for warmth.”

“He was stiff. He had been in the saltwater for almost 36 hours. He wasn’t going to make it through the day,” the Captain told Florida media.

Captain Cornell called the US Coast Guard Southeast, as he helped pull the man to safety, 23 miles east of Fort Pierce. “Actually we had to take off his clothes he was soaked in gasoline and we squirted him down and got Dawn soap and rubbed him down (as) his skin was burning,” Busch disclosed.

With a nine-member fleet of planes, cutters and a helicopter, the Coast Guard and a Florida Wing Civil Air Patrol probed an area of 10,694 miles for a total of 140 hours, eventually suspending the search that Sunday, the Coast Guard announced in a statement. “The decision to suspend a search-and-rescue case is never one we come to lightly,” said Captain JoAnn Burdian, commander of Coast Guard Sector Miami. “We offer our deepest sympathies to the friends and families of those involved during this difficult time.”

Captain Cornell was putting a swing set together for his daughter in March when his phone started ringing. The “Caller I.D. was from Kingston, Jamaica. It was Orville! He told me when the Coast Guard got him to the hospital the doctors said they did not know how he was still alive. He was unable to walk when he returned to Jamaica and is just now getting back on his feet, walking and jogging. Happy to report he is back with his family and making a full recovery!”

The Captain believes the rescue “was just a miracle,” and declares that he is “thankful to have been in the right place at the right time.”

Lyons posted through a proxy, “Thanks to you and the whole (crew) for saving my life I could honestly say I never had much left in me to hold on much longer, world of thanks from me an(d) my family.” For Guyanese struggling to understand and cope with the tragedy of the missing men, there are more questions than answers why the four left their children and families, to end up in a deadly outing in the angry Atlantic, on the other side of the region.

As for the US Coastguard, it faces an endless task, rescuing and sending back boatloads of Cubans and other illegal migrants, with no end in sight to those dying to reach America.

*ID thinks of Ernest Hemingway who lived on Bimini in the 1930s, fishing aboard his boat “Pilar.” A 500-pound Atlantic blue marlin caught off the islands, allegedly inspired Hemingway to write his masterpiece, “The Old Man and the Sea.”

Prime Minister Chastanet is an ‘imposter’: He must resign