ROSEAU, Dominica – The Dominica Labor Party (DLP) led by prime minister Roosevelt Skerrit secured a major victory on Friday, winning 18 out of the 21 constituencies in the general elections. The elections were contested by the opposition party United Workers Party (UWP), with the provision of the Washington-based Organization of American States (OAS), the Electoral Reform Effort Group, internal and external insurgency. 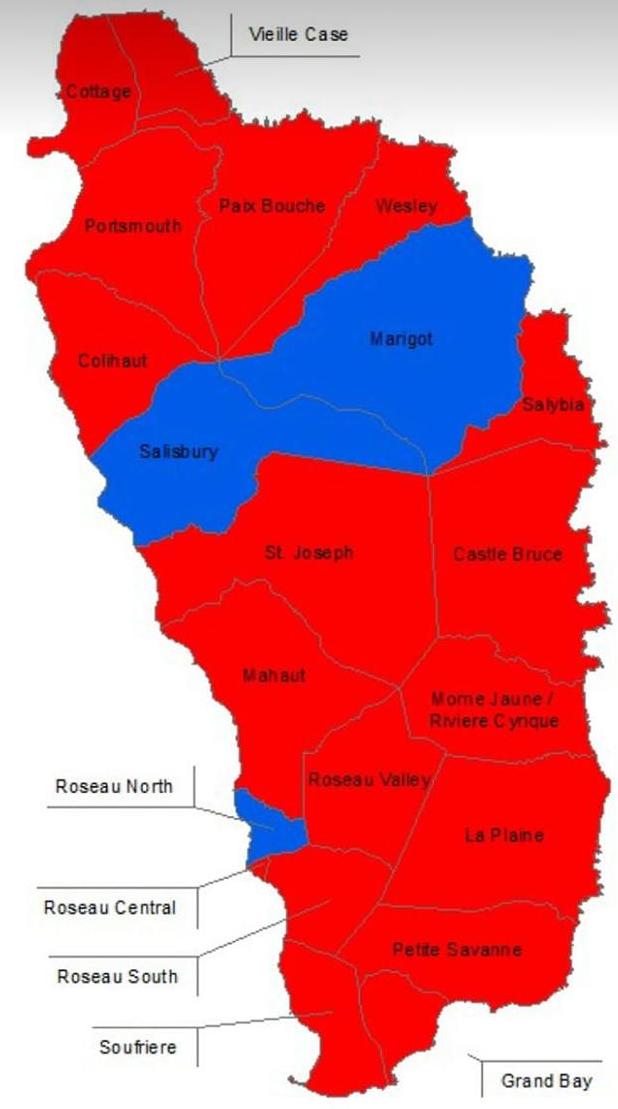 The DLP improved their seat-count by three from the 2014 elections, reclaiming Wesley, Roseau South, and Roseau Central. Melissa Poppone-Skerrit, the wife of prime minister Skerrit and first-timer, secured a historic victory in the Roseau Central constituency.

Noteworthy was the defeat of Joseph Isaac – a former UWP who crossed the floor in early 2019 and contested on the DLP ticket.

The following is the full text of prime minister Roosevelt Skerrit’s address to the Commonwealth of Dominica, on the election victory of the Dominica Labour Party (DLP), Friday, December 6, 2019.

My dear people, the elections are over. They were, as the Dominica Labour Party (DLP) has always promised, free and fair. The national general elections were conducted under the laws that have governed elections in this country in the 41 years since independence.

The people, of the Commonwealth of Dominica, have spoken and I want to thank them for giving the DLP a resounding victory and returning us to office, for another term, as the next government. I want to thank you for giving me the honour and privilege of serving you as prime minister, and for electing the DLP as your government. We are humbled and grateful for your continued confidence and support.

I want to reassure you tonight that the labour party recommits to the high standard of governance for which we have become known at home and abroad. I also sincerely congratulate all incoming parliamentary representatives from every constituency and look forward to working with you. I extend particular congratulations to those of you who were elected for the first time and wish you good service to your constituents.

There is no doubt that the election campaign was a bruising one. I want to thank all the people who voted today, and in so doing, demonstrated that democracy in our country is alive and well.

It was labour’s contention from the very outset, that the ballot box is the fair and legitimate expression of what people want. It was always labour’s preferred choice over the divisive rhetoric and actions which put nationals in fear, harmed our social fabric, our economy and our international reputation. Our citizens have made their choice. We must all now respect that.

Given the atmosphere of fear and intimidation created by the United Workers Party (UWP), opposition, over the course of this campaign, many people could have opted to stay at home. But Dominicans have once again shown tremendous determination, courage, and resilience in the face of all the odds.

They turned out in large numbers to show their dissatisfaction with the opposition party. I salute the people of this country, who continue to make me proud to be Dominican.

I wish to thank the candidates of the labour party, our volunteers, teams, and supporters all over Dominica, for the exemplary manner in which they conducted themselves throughout this election campaign and for their collective and individual contributions in securing this victory.

Let me also thank Hartley Henry our political strategist for the past 25 years and Dr Vince Henderson, our campaign manager for their exemplary efforts towards winning this victory.

Let me also thank the Dominicans abroad and the many people from all over the world, who have offered prayerful support and messages which have buoyed our spirits and kept us focused during the agenda of violence over the last few weeks.

The labour party has a proud history. Our legacy of development of Dominica and Dominica’s stands, for the world to see. We took over a country that was broke and undeveloped and transformed it. Dominica has come from far and is now positioned to be one of the leaders in our region.

Labour’s success at rebuilding and “building back better” after the energy crisis, the global financial crisis and the natural disasters of Erika and Maria, will continue to be admired and lauded by commentators all over the world.

At the start of this campaign and in my letter to the people of Dominica, contained in the labour party’s manifesto, I indicated that the labour party was seeking re-election on three grounds – our performance as a government; the strength of our new team; and our vision for the future.

Let us concede that we have a great deal of hard work ahead of us. There is no doubt that there are now social rifts, economic damage and reputational concerns that have to be addressed as a matter of urgency. This will be the first order of business of the new labour party government.

In that regard, I will shortly be naming my Cabinet so that we can immediately set about rebuilding from the reputational damage and repairing the hurts of the last few weeks.

I also look forward to inviting Lennox Linton to early discussions as we all seek to unite the nation.

Our agenda for the next term is an ambitious and exciting one. We have to start work at once to build Dynamic Dominica while continuing our major initiatives in housing, health, and education.

At the same time, we recognise the need to continue our signature social programmes such as Yes We Care and Rapid Response. The government must also quickly begin the reclassification exercise for the members of the public service in order that they can get a better deal. I include here, the general service but especially, nurses, police, teachers, and fire officers.

For some time now, and certainly, during this campaign, the issue of electoral reform has been a vexed one. Although they have called for it, the UWP blocked the legislation and process for reform by protest action and an injunction in the High Court. We have to move beyond this and bring the process of reform to closure in a manner that satisfies the national interest. Having reflected on this issue, it is my intention to invite a renown Caribbean jurist to lead a National Commission on Electoral Reform.

The work of that Commission added to all the previous consultancy and election reports from various international organisations, together with the decision of the Courts, will inform the shape of Dominica’s electoral reform.

Public hearings will be held throughout the country and all Dominicans will be able to appear before the Commission and give their views. Provision will be made for anonymous submissions as well as for an open discussion forum on social media sites.

These, my dear friends, constitute the priority agenda of the first 100 days of the new administration of the Dominica Labour Party.

The labour party will continue its mission to protect our seniors, the poor and vulnerable; expand opportunity for all citizens; build a just society, a robust economy, a resilient natural and built environment and secure the future of our young people and our country.

The elections are over. The UWP failed to delay or stop elections through legal means. They failed to provoke our security services. They failed in getting the country to take up their call for widespread violence and unrest. And they have failed in the ballot box.

It is not for me to advise them, but perhaps, they may wish to consider that a campaign of lies and acts of national harm are not the way to woo the electorate and win an election. After a general election defeat, political parties tend to have a period of introspection in which they review their leadership, policies and practices, but they also regroup and resurge which I know the UWP will do. An opposition is an important institution in a democratic society, and the labour party looks forward to the UWP performing the role of the opposition, in a responsible manner.

However, as prime minister, I cannot allow the UWP campaign of roadblocking, recklessness, intimidation, and abuse to continue indefinitely and unabated. There must and will be respect for law and order in this country. It is only by God’s grace and mercy that no-one has been seriously hurt so far.

In the interest of the country, I call on the UWP leadership and supporters, to halt the conduct and behaviour of the last few weeks. Concede defeat and let the country come together.

I, therefore, want to appeal to Dominicans in every constituency, to let us move forward in unity. Many votes go into ballot boxes, but once the results of those votes are known, we must emerge as one people, focused on the important tasks of national healing and nation-building.

It is customary for various kinds of celebrations to follow elections. Nonetheless, given the volatility and tensions of the last few weeks, I am asking all labour party candidates to suspend their victory celebrations until next weekend. Instead, I am declaring Sunday, December 8, as a Day of National Peace, Prayer, Reconciliation and Healing. I am asking all churches to hold services at 10:00 a.m. so that the entire country will be praying at the same time.

I am instructing all newly elected labour parliamentarians and losing candidates to lead by example and attend a church service in their individual constituencies, at a church of their choice. I invite the elected parliamentarians from the UWP to do the same.

Next weekend, when there is a greater sense of calm, we will hold our victory parties, motorcades, and celebrations of various sorts. There will also be a National Ecumenical Service of thanksgiving at that time.

I give this country my full assurance, that the Dominica Labour Party and I are completely committed to the dual task of healing and building the nation.