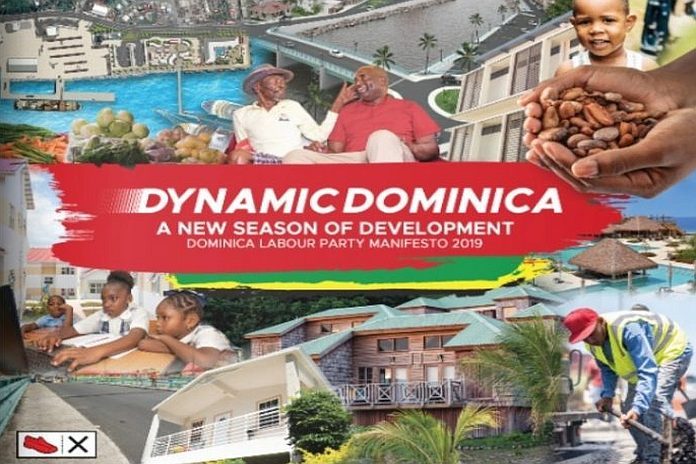 ROSEAU, Dominica – Today, Friday, December 6, 2019 is election day, described as the most important general elections in Dominica’s history amid lawlessness, social and economic sabotage, facilitated by internal and external forces. However, Dynamic Dominica votes a new season of development.

On this historic day, never mind the machinations behind electoral reform – the great conspiracy in Dominica’s general election – the Electoral Reform Effort Group issued a statement requesting “all eligible electors to peacefully go to their designated polling stations and vote in accordance with a good conscience, conscious of the issues at hand.”

“Nonetheless, we must pause to reflect, with much regret and shame, that we as a country not only did not achieve the bare minimum that any modern democratic country ought to showcase as attributes of a functional and credible electoral process but has been embroiled in civil unrest and disturbances on account of this failure, the first in our history and likely the English speaking Caribbean.”

“The Group wishes that the result of the polls will be adequately acceptable to the resident population to allow citizens to move to work at repairing and rebuilding our damaged image as a peaceful people, and to continue the process of building the economy and country.  We need to find tangible ways to peace.”

“Once again, the Group urges, that going forward, the full scope of electoral reform, inclusive of campaign financing, access to State media, minimizing the advantage of the incumbency, and constituency boundary redistribution, should be undertaken well within the first year after the general election,” said Electoral Reform Effort Group.

In the same modus operandi, the United Workers Party (UWP) leader Lennox Linton is encouraging his supporters to turn-out in massive numbers to cast their votes, “even though he believes that it is not fair, nor it is going to be free. We have what is available to us, something called a vote and that vote can be exercised and will be exercised tomorrow,” Linton said.

According to Linton “the reason the country is where it is today is because, one man has decided he will violate the constitutional provision that guarantees or provides that the electoral management body of Dominica, the electoral commission, will function independently and outside the direction and control of any other person or authority.”

In the interest of law and order as prescribed by prime minister Roosevelt Skerrit in his address Dynamic Dominica: The democratic process, “once again to reiterate my total abhorrence of the behavior of persons in positions of influence, who are causing the destruction of Dominica’s good name and image abroad… that the intimidation of voters and other law-abiding citizens in this country will stop, in the prelude to voting.”

“I am deeply concerned about the short and medium-term impact of this lawlessness and hooliganism on safety, and on the social and economic fabric of our society. So, concerned, that I requested sister nations in the Regional Security System to send us support for our police force, just in case the instigators and perpetrators entertain the idea of continuing their nonsense into [tomorrow] and Friday”, Skerrit said.

This followed the Organization of Eastern Caribbean States (OECS) governments via the Regional Security Services (RSS) headquarters in Barbados, and in keeping with the RSS Treaty members honoured the request and dispatched personnel, policemen, and soldiers to Dominica.

Dr Ernest Hilaire, first deputy political leader of the Saint Lucia Labour Party (SLP) and Castries South member of parliament urged Dominicans to “come out to vote. You see all the bacchanal; all the noise will mean nothing if you do not come out to vote.”

“You know why all that burning [blocking of roads, and lawlessness] is happening? They want fear and they want anger and they want people to stay home, but their people will come out to vote and you will lose,” Hillaire said.

Dynamic Dominica is working together towards the future of Dominica led by the Dominica Labour Party (DLP) government; and as seen and experience, building on a foundation of sustainability and resilience to become the first climate-resilient nation in the world, “the economy of Dynamic Dominica must be built on our natural assets, our hard-earned gains, our creative people, our joint national effort and our vision for our country and our future.”

“At the same time, your labour government will continue to build a strong, sustainable economy, managing the national debt, reducing the balance of payments deficit and our debt to GDP ratio, maintaining it within manageable levels.

“Your labour party has started and will continue to build a dynamic and vibrant economy and society in which all Dominicans have a stake, to which everyone contributes and from which everyone benefits. With Dynamic Dominica, a new season of development has begun.”

Time off to vote in Dominica guaranteed with pay