But, a storyline has developed and one strange fact that came to light is a former Governor’s appointee to the auditor general department was busy with her own inquiry as the Andrew Fahie government was trying desperately to get much-needed monies into the hands of its most vulnerable, farmers and fisherfolk, who were financially devasted by the collapse of the economy due to the pandemic.

Sonia Webster, the auditor general who was brought out of retirement by former governor Gus Jaspert was busy scrutinizing the finance department while the public was told to stay home and remain in quarantine. What she depicted to the COI is a premier’s office who was trying to “block” her access to documents, but sources inside the Fahie government defend their actions saying it was very strange, that while the government was trying to prevent starvation by the most vulnerable former governor Gus Jaspert and Webster were incensed by the legal methods which are available to the local government to inject capital into the local economy through grants, small contracts and soft loans.

As it turns out, the UK government led by Boris Johnson were engaged in even more questionable coronavirus spending than those they are investigating in the Virgin Islands, leaving many to question the motive of conducting a Commission of Inquiry (COI) hearing about pandemic spending in BVI.

The very real issue is one of power and control of the territories, that sources say ostensibly: “Jaspert wanted Fahie and his government to take a back seat and let him run the country similar to what had happened in other Overseas Territories such as Turks and Caicos, and when that did not happen a plot to take over the BVI government through a COI was hatched.”

“If left up to Jaspert and Commissioner, Gary Hickinbottom, our people would starve,” said a source. This constant questioning and interference by the governor is one of the things that led to a breakdown in the relationship between the governor and Fahie.

The local population have been speculating that Hickinbottom is nothing more than a “hook-in-the bottom” of the BVIslanders as they try to fight off a raging pandemic and a reputational hit to the country brought about by the British government mechanism of a commission of inquiry.

Currently, while 1,600 people are said to have coronavirus and 23 have died in a small population including members of the civil service, the Commission is insensitive and perhaps contributing to the spread of the virus by insisting that their inquiry continues. The Commission has since taken a break and the governor recently extended the timeline despite the threat to life in BVI.

Meanwhile, none of the insensitivity and hypocrisy of the British government’s actions in BVI towards the local government and people seems to get noticed in London as the UK is busy reopening from its lockdowns.

The commission of inquiry came about because Jaspert having the constitutional upper hand on the premier, detailed a long list of alleged abuses to the foreign secretary who took Jaspert’s word and called for a commission after Fahie rebuffed his attempts at an internal takeover. However, Fahie or the local government was never asked for their side of the story by the British government or Dominic Raab the foreign secretary before calling a Commission of Inquiry, which flies in the face of good governance, transparency and fairness, but more importantly against the stated partnership which the UK foreign office espouses with her territories.

Nevertheless, it might have proven fruitless if Fahie did have such a meeting to air his side since the British government has been busy dismantling the appearance of any real power from local politicians in the Overseas Territories for the past decade through various British government appointed inquiries but particularly, in the four most prosperous Caribbean territories of BVI, Cayman, Bermuda and Turks and Caicos Islands; especially during periods of world crises such as the 2008 – 2012 period in Turks and Caicos, while the world was going through a global recession.

Essentially, the end goal of the playbook used by the foreign office seems to open up the bidding process to expatriate companies for lucrative government contracts, takeover crown land and expand the population through the grant of Belonger status – most of these tools are imagined by the local government to help its people.

“This initial process is well advanced in BVI and the local population should brace themselves for a complete British takeover of their government and processes, should they not call for, demand and get a complete end to the proceedings,” said a source familiar with how the British government works in the Overseas Territories. 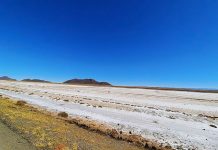 1.5 billion people, living with soil too salty to be fertile

BVI must look at discrimination at home and abroad