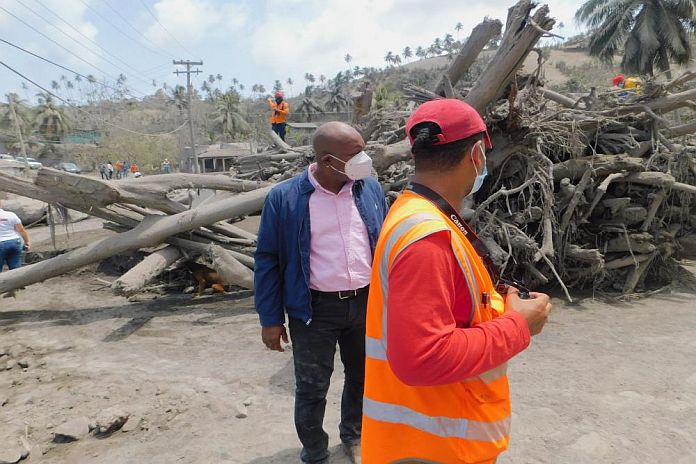 SAN JOSE, Costa Rica, (IICA) – The catastrophic situation of Saint Vincent and the Grenadines, which suffered a series of volcanic eruptions this month that left the country in a state of emergency, is affecting the availability and affordability of food, said the minister of agriculture of the Eastern Caribbean nation, Saboto Caesar, who calculated the local agricultural losses at more than $150 million.

Saint Vincent and the Grenadines was affected by massive ashfall after the eruption of the La Soufrière volcano, the first since April 1979, which caused earthquakes and forced the displacement of some 20,000 people. This catastrophe has driven the country into a humanitarian crisis, according to reports presented by IICA staff in the Caribbean nation, the UN and local authorities.

“We are facing a catastrophe in agriculture, fishing, road infrastructure and other areas. We have problems that affect food security and sovereignty; the affordability, accessibility and availability of food is at risk”, stated Saboto Caesar when speaking before the Special Advisory Commission on Management Issues (SACMI) of the Inter-American Institute for Cooperation on Agriculture (IICA).

“On behalf of the government of Saint Vincent and the Grenadines, I wish to thank the partners and countries that have expressed their solidarity, the director-general of IICA, Manuel Otero, for his support and the assistance we have already received from the Institute. Thank you for the work you have done so far. We need this assistance to address the humanitarian crisis that we are facing at this time” added Caesar, who anticipated that the government of the Caribbean country will shortly launch “a platform for the reconstruction of the agricultural sector”, an initiative for which he also requested assistance and support.

Based on his review of the impact on the agricultural sector, the minister estimated that the damage caused is equal to “more than $150 million, causing strong negative impacts on family farming and micro-producers in the country”, as well as on the percentage of agriculture in the GDP.

“Despite this, I am comforted by knowing we can count on our partners at IICA, and on IICA itself, to rebuild agriculture in a better way. I would like to underscore the importance of this reciprocity, and I am confident that we will continue to receive support at this very difficult time. I am requesting your efforts to mobilize resources in the most adequate way to assist farmers, fishermen and others in need. We will present a document to IICA in the next few days and take it from there” anticipated Caesar.

SACMI is a special committee that advises and assists the director-general of IICA in strengthening the operational capacity of the Institute specialized in agricultural and rural development, comprising nine Member States, six of which are permanent members (Argentina, Brazil, Canada, the United States, Mexico and Venezuela). The other three are appointed annually based on a principle of geographic and alphabetical rotation. This year, these countries are Colombia, Costa Rica and St Kitts and Nevis.

Minister Caesar participated as a special guest of the director-general of IICA, Manuel Otero. IICA, in addition to the mobilization of its human and financial resources, participated in the distribution of 1,200 food aid bags to agricultural producers, a task supervised by minister Caesar.

Agricultural producers located in the communities of the country’s “red zone” – the most affected by the eruptions – had to relocate livestock to ensure its survival.