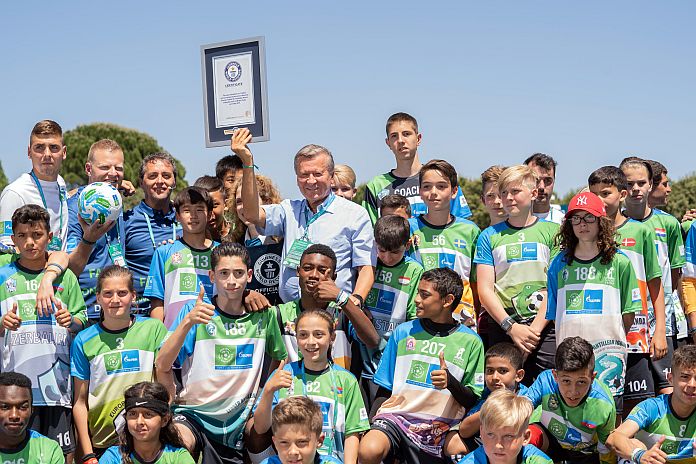 MOSCOW, Russia – Gazprom International Children’s Social Programme Football for Friendship will try to set a new Guinness World Records title as part of the final events of the Eighth Season. Young Participants from over 100 countries of Europe, Asia, Africa, North and South America, Australia, and Oceania together with football stars will join the football online event with the most participants in the world. The final events will take place on November 27 – December 9.

To support the season, the Organizing Committee of Football for Friendship has launched a new weekly YouTube show “Stadium Is where I Am”. In the show, the best freestylers and football players in the world learn freestyle tricks with children, share the secrets of sportsmanship and give the most skilled participant unique prizes. Among the famous athletes, there are the UEFA ambassadors – Luis Garcia, Robert Pirès, Kelly Smith; Melody Donchet – five-time World Football Freestyle Champion; Anton Pavlinov – two-time World Football Freestyle Champion, author and host of the Foothacker YouTube channel; Andreas Cetkovich – French Football and Basketball Freestyle Champion and Co-founder of S3 Freestyle.

In an attempt to set a new Guinness World Records title, it is planned to organize a live broadcast of the Stadium is where I am show. The international master class for the children will be held by Roberto Carlos, the Global Ambassador of Football for Friendship.

In 2019, the Gazprom International Children’s Social Programme Football for Friendship has already obtained the Guinness World Records title for the Most nationalities in a football (soccer) training session in history. In 2020, the Football for Friendship team and members plan to prove once again that any barriers can be overcome in achieving their goals.

To try to set a world record and take part in the first Football for Friendship eWorld Championship, please submit your application.

The winners will receive tickets to the 2021 UEFA Champions League Final in Istanbul. The Football for Friendship eWorld Championship will be held from November 27 to December 9, 2020, on the platform of the new multiplayer game Football for Friendship World. Young athletes 10 – 14 years old from over 100 countries, having united in 32 Teams of Friendship, will play 55 matches. The Final of the Championship will be broadcast live.

AGT Communications Group is the Global Operator of Gazprom’s Football for Friendship programme. The international team of the DataArt company is developing the game. The game will be available for free for first users.