ROSEAU, Dominica – The government of the Commonwealth of Dominica announced that it will provide all households on the island with jute and cotton bags as part of the ‘Go Green Dominica’ sustainable alternative to plastic bags. Visitors to the island are likewise encouraged to adopt the Dominican way of life, the Nature Island of the Caribbean deeply rooted in caring for the natural environment, developing resilient infrastructure and building back better towards a climate resilience country.

The ‘Go Green Dominica’ initiative follows a comprehensive ban on all single-use plastic and Styrofoam containers, initiated January 2019, and the application of zero percent import duty on authenticated biodegradable products and reusable shopping bags in December 2018.

In 2017, category-five hurricane Maria struck Dominica with damages worth more than twice its GDP and left nearly 90 percent of the structures on the island damaged, while recovering from tropical Storm Erika in 2015.

Within days of hurricane Maria landfall and devastation, prime minister, Roosevelt Skerrit speaking at the United Nations General Assembly in New York said: “72,000 Dominicans lie on the frontline of a war they did not choose with extensive casualties from a war that they did not start […] While the big countries talk, the small island nations suffer. We need action and we need it now.” 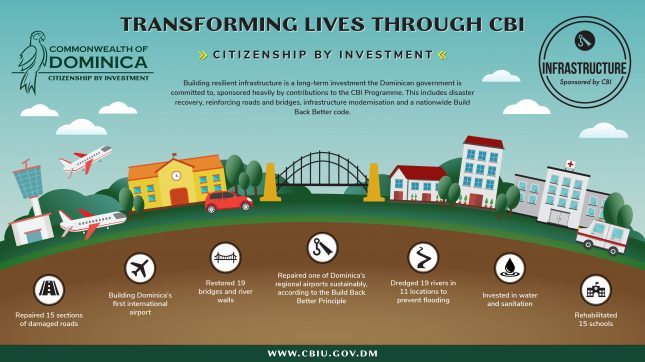 The island’s ecotourism sector is recovering with a new eco-conscious supported by its citizenship by investment (CBI) programme that has helped achieve the following:

“We are entering our 27 years as a CBI program,” said head of the CBI unit, ambassador Emmanuel Nanthan in Dominica “and there are things that people can see what’s happening with CBI monies here in the country,”  while “we continue to do what we have to do, engaging, marketing and selling the programme,” ambassador Nanthan said.

“We have seen the benefits, we have seen the hotels. CBI is continuing to do well for us and for Dominica,” he summarise; often referred to as the ‘poster child’ for CBI transparency, ecotourism, and climate resilience.

The government of Dominica has directed millions towards economic transition and recovery efforts in infrastructural rehabilitation and reinforcement. The Housing Revolution comprises building 5,000 plus modern homes, in safer areas; and in the near future will provide green energy from the geothermal plant currently being developed to the entire country with options for export.