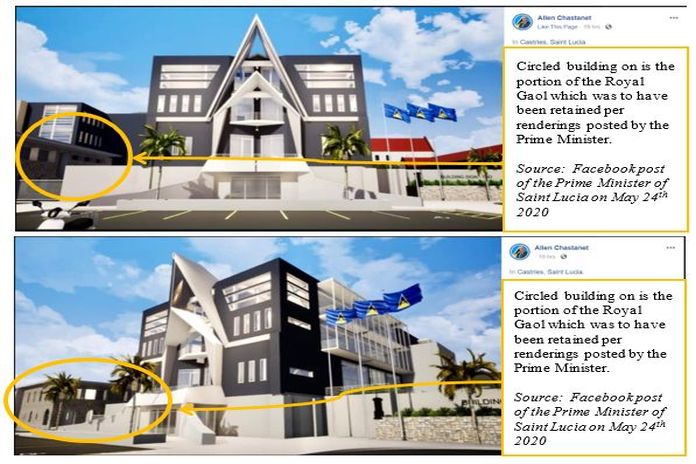 CASTRIES, St Lucia – On the morning of Saturday, May 23, 2020, the government of Saint Lucia proceeded to demolish the historic Royal Gaol buildings, structures of significant historic value by virtue of their age, architecture, uniqueness and association with historic events within the Saint Lucian built heritage and cultural landscape context.

A destructive, shameful and vile day in the history of Fair Helen

The Royal Gaol was completed in 1827 after three years of construction at a cost of significance in its time, £5,417. It was the only known structure in Saint Lucia dating to the 1820s and was the oldest known standing structure in the Castries City Centre. It terms of its scale relative to the other remaining structures of its period, it was also a significant building, with over 7,000 square feet of floor space. Henry H. Breen, contemporary writer, historian and later Administrator of Saint Lucia writes in 1844 that the Gaol was one of the most significant structures in the town of Castries and that “The Gaol is one of the best in the West Indies.” [St. Lucia: Historical, Statistical, and Descriptive, pp.25-26].  It was one also of very few remaining artefacts of the enslavement period.  Yet, it now rests at the Deglos Landfill.

It was the day on which the government of Saint Lucia openly and blatantly demonstrated its disregard for the rule of law, our patrimony, good governance and integrity in public office. The government of Saint Lucia and the holders of its highest offices showed that they cannot be trusted when they enter into negotiations and execute agreements and undertakings, demonstrating a lack of moral leadership and integrity. By their actions they have demonstrated their utter contempt for Fair Helen’s patrimony and the things that uniquely make us Saint Lucian. This flagrant and wanton destruction of who we are as a people is sadly an indelible stain on all Saint Lucians and should not be accepted by anyone who truly loves Saint Lucia.

Following the injunction issued by the High Court on September 9, 2018, to stop the demolition of the Original Royal Gaol and Historic Annex Building, a high-level meeting of all parties involved in the matter was convened under order of the Court to find a way forward with the project. That high-level meeting was chaired by the acting prime minister, Lennard Montoute and set the tone for our further dialogue. It was a good meeting. A number of working meetings between the government team and the Trust Team (SLNT), (as the parties were referred to in the written agreement) followed and resulted in a four-page agreement that set out the expectations and commitments on both sides, including an undertaking dated October 24, 2018, by the attorney general given on behalf of government that:

“I [the Honourable Attorney General] hereby give my undertaking to the Trust that the demolition of the buildings depicted on slide no. 35 in the Trust’s PowerPoint presentation as Original Royal Gaol and Historic Annex Building (hereafter the “old prison”) shall cease until such time as consultation between the Trust and the Government of Saint Lucia or its servants and/or agents including the Office of the Prime Minister, in relation to the plans for the development of the old prison are concluded and consideration given to the recommendations of the Trust.”

In view of the signed and expressed Undertaking given by the attorney-general and pursuant to the terms of the undertaking and agreement between the parties, the Saint Lucia National Trust withdrew its legal proceedings and agreed to a discharge of the injunction.

A joint press release was issued on the same day, October 24, 2018, with the Saint Lucia National Trust and the government of Saint Lucia agreeing, at the behest of the attorney-general, not to publicly disclose the details of the agreement. This was also the reason given as to why the terms of the agreement should not form part of a Court Order and a letter of undertaking from the attorney-general accepted in its stead. The undertaking and therefore the word of the attorney- general is supposed to be one of utmost integrity and sincerity and this was accepted by the Trust.

We are sorely disappointed that the prime minister and some of his ministers persist in misleading the public with statements that the Trust’s injunction prevented their plans for this site from advancing.

This statement was made as recently as May 24, 2020, on the prime minister’s Instagram and Facebook pages on the day after the buildings were demolished, where it was stated that “In October of 2018, we commenced the preparations of the site for the construction of a new police headquarters. his was delayed for one year and six months due to an injunction which was filed.” This statement is highly disingenuous on the part of the prime minister. As earlier stated, the injunction was filed more than eighteen months ago, on September 9, 2018, and, as the prime minister must or ought to know, the injunction was withdrawn six and a half weeks later, on October 24, 2018. As such, responsibility for delays in the implementation of this project cannot be reasonably ascribed to the injunction filed by the Trust. Such a claim is simply not true.

The Trust and its partners met with the project architects on December 7, 2018, and February 25, 2019. At these meetings, the Trust was never provided with any copies of plans. Only renderings were shown.  We, however, toured the Royal Gaol site with the architects and shared our guidance as to how those buildings might have been retained. By letter dated March 4, 2019, the attorney-general informed the Trust that:

“At both meetings the architects made presentations of the conceptual designs for the Police Headquarters project.  The proposed layout indicates that the former Royal Gaol, Historic Annex, Baron Asylum and the Police Building will be incorporated into the design. This is again consistent with the undertaking previously given.”

Further to the undertaking and this letter, the Trust was comforted that the Royal Gaol would be incorporated into the future design of the police headquarters and criminal courts. We therefore only awaited the detailed development plans for review in accordance with paragraph 5 of our Agreement Letter of October 24, 2018, which states:

These plans have still not been received. The government instead proceeded to demolish the Royal Gaol and Annex on May 23, 2020.

Throughout this process, the Trust went to great lengths to assure the government and the public that it supported the much-needed police headquarters project and its only concern was the protection of the historic structures on the site and their integration into the final project. The buildings are now gone, and we are left with more questions than answers:

The way in which this demolition occurred is telling. There was no effort to engage the Trust despite the relatively protracted and very public history of this matter. All involved would have been aware, and most were in fact party to the undertaking. Instead, the demolition was a well organised exercise executed efficiently on a Saturday morning. This approach deliberately intended to surprise and frustrate the Trust, and to ensure that this time, the government’s demolition of our citizens’ important historic buildings would succeed. A government’s role is to protect its people and their heritage. We did not expect this, because we were comforted that we had an agreement with an upstanding and responsible entity, our government.

The day after government demolished the Royal Gaol the prime minister posted the proposed design on his Facebook Page to “…invite you to view the plans for the construction of the Police Headquarters and Halls of Justice in Castries”.

If you look at the bottom left corner of the renderings posted you will see the Royal Gaol included in the design. We find it impossible to understand his logic unless we consider his disregard for our patrimony, or his inability to understand the drawings he posted, or his belief that you will believe anything he says or all of the above.

We have no choice now, but to strongly condemn this action by the government:

Our preliminary recommendations were accepted and we were ready to provide further guidance pending government’s submission of the designs. The Trust has acted with utmost responsibility and maturity throughout, and complied with the undertaking, even to the point of not publicly disclosing the details of the Undertaking. However, without exception, the government has deliberately reneged on the commitments enshrined in an agreement brokered by the highest legal authority within the government. This is a serious breach of trust.

If a government can so blatantly and publicly contravene an undertaking, all Saint Lucians should be concerned as to whether the government will honour any commitment that it makes to them and others, should it be of the slightest inconvenience for them to do so. All should now be highly concerned about the ‘honour’ of this government and whether anyone can place any trust in them or accept their word on anything.

We are distraught and outraged over the loss of these buildings which can never be recovered, but even more so, by the way in which these events have transpired.  In this single action by the Government, they have made this matter about so much more than two important historic buildings and the National Trust. It is now a matter of the integrity and trustworthiness of our government. It is about the values and quality of governance we can expect of our leaders. We can only hope that our people will not be blinded by all the anti-Trust rhetoric that we expect to be voiced by government operatives in an effort to discredit the National Trust and validate and justify their unwarranted and dishonorable behaviour on this matter.

For our part, we will continue to act in the interest of the people of Saint Lucia to encourage our government to abide by the laws of this land, call them to account and closely scrutinize any commitments they make to the Trust and the Saint Lucian people, in the interest of sustainable national development and good governance.

We implore all Saint Lucians to stand for all things Saint Lucian, including our rights and privileges in relation to the nation’s patrimony. Without our patrimony we are a people without depth and character; a people with no roots, no identity, no pride in who we are, and no legacy to leave to our children. How can we develop a high-value tourism product without an identity of our own?  Are we prepared to sacrifice our past in the interest of present and short-lived expediency?

CARICOM, The UWI, Biden and the future of our voice