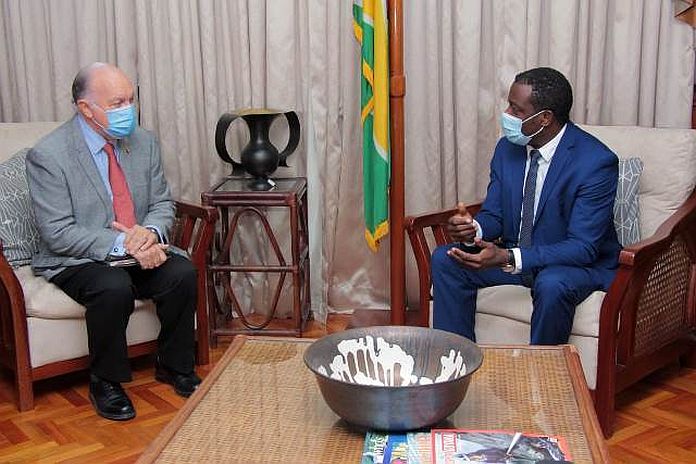 GUYANA / VENEZUELA – Following the minister of foreign affairs and international cooperation, Hugh Todd, summoned the Venezuelan ambassador to Guyana, His Excellency Luis Edgardo Diaz Monclus to hand over a protest note and register the government of Guyana’s condemnation “that on Tuesday, March 2, 2021, at approximately 13:20 hrs., two Venezuelan Sukhoi SU 30 fighter jets, flew over the community of Eteringbang and the airstrip at a very low altitude. The fighter jets then circled the location once before proceeding in an easterly direction” is a violation of Guyana’s sovereignty.

The Cooperative Republic of Guyana

“The Ministry of Foreign Affairs of the Cooperative Republic of Guyana wishes to inform that on Tuesday, March 2, 2021, at approximately 13:20 hrs., two Venezuelan army Sukhoi SU 30 fighter jets, overflew the community of Eteringbang and the air strip at a very low altitude of 1500 feet. The fighter jets circled the location once before proceeding in an easterly direction.

The Government of Guyana condemns this latest act of aggression by the Venezuelan armed forces as a violation of the sovereignty of Guyana over the air above its territory.

The Government wishes to remind that this latest hostility follows closely on the heels of: (i) a Decree recently issued by President Nicolas Maduro which purports to establish maritime territory for Venezuela which encompasses Guyana’s territorial waters, EEZ and continental shelf, as well as its land territory west of the Essequibo River; (ii) the illegal interception and detention of two Guyanese fishing vessels and their crew in Guyana’s waters; and (iii) the resolutions of the Special Commission for the Defence of the “Guayana Esequiba” and Territorial Sovereignty which recommended the convening a session of this Special Commission to the Essequibo with the assistance of the Venezuelan armed forces.

“The international community will be kept informed of all actions undertaken by Venezuela to undermine the sovereignty and territorial integrity of Guyana and threaten the peace and security of the region.”

The Bolivarian Republic of Venezuela

“The People’s Power Ministry for Foreign Relations of the Bolivarian Republic of Venezuela strongly rejects the inaccuracies and false accusations contained in the communiqué issued by the Ministry of Foreign Affairs of the Cooperative Republic of Guyana on March 3rd, 2021, with which they seek to manipulate reality to feed a negative matrix against Venezuela in relation to the territorial dispute over the Guyana Esequiba.

Once again, in an absurd manner, the Government of Guyana intends to generate false versions about the regular patrolling operations of the borders of Venezuela, carried out by the Bolivarian National Armed Forces, strictly limited to the noncontroversial Venezuelan territory, with the purpose of pretending an alleged “aggression act” against sisterly Guyana.

It is disconcerting that, in an effort to promote this repeated defamatory and victimization campaign before the international community, an unfounded accusation is issued, based on videos published on social networks, without providing the precise and geo-referenced location of the area in question.

The Bolivarian Republic of Venezuela also reminded the Ministry of Foreign Affairs and International Cooperation that, since there is a dispute over Guyana Esequiba, none of the Parties can refer to this territory as its own, under its sovereignty and jurisdiction, as provided by Article 5 of the 1966 Geneva Agreement.

“Therefore, the Government of the Bolivarian Republic of Venezuela remains faithful to its position in favor of resuming the spirit and mechanisms to seek a practical, peaceful and mutually satisfactory settlement to the territorial dispute over Guyana Esequiba, and condemns the attitude of the Cooperative Republic of Guayana as a false victim.”

Meanwhile, His Excellency, Dr Mohamed Irfaan Ali, on Thursday restated: “The government of Guyana remains fully committed to the settlement of the Guyana/Venezuela border matter in the International Court of Justice (ICJ).”