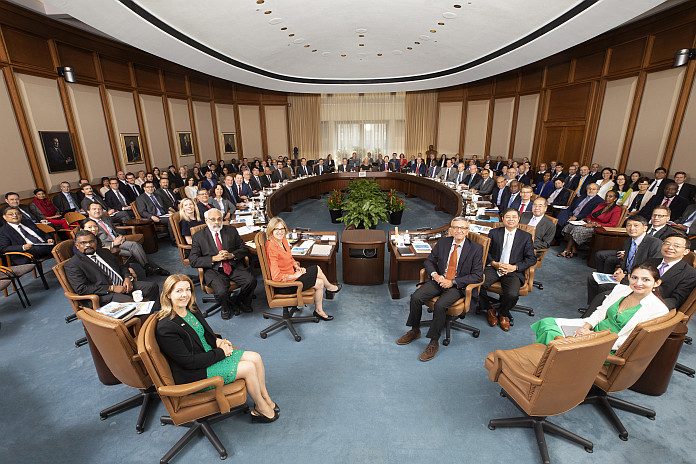 MEXICO CITY, Mexico – On November 4, 2019 the executive board of the International Monetary Fund (IMF) concluded the Article IV Consultation [1] with Mexico.

The Mexican economy has continued to exhibit resilience in a complex environment, but growth has come to a standstill amid elevated policy uncertainty, tight monetary conditions, and budget under-execution. The authorities’ commitment to fiscal prudence is strong, monetary policy has succeeded in bringing inflation to target, and financial sector supervision and regulation remain robust. The flexible exchange rate is playing a key role in helping the economy adjust to shocks.

Growth is expected to accelerate modestly in the near-term, reaching 0.4 percent in 2019, as macroeconomic policies become less contractionary. It is projected to recover to 1.3 percent in 2020 on the back of strengthening consumption and despite continued weakness in investment. Headline inflation is projected to remain around the central bank’s target of three percent, while core inflation is expected to gradually decline from elevated levels amid still tight monetary policy.

Monetary policy has started easing in the context of a widening negative output gap and declining inflation. The central bank reduced the policy rate in two 25 basis point steps in August and September to 7.75 percent. Meanwhile, it did not intervene in the market, which allowed the peso to adjust freely to shocks.

Mexico’s external position remains broadly consistent with medium-term fundamentals and desirable policy settings. Staff projects the current account deficit to narrow this year and to widen modestly over the medium-term. Foreign exchange reserves are adequate according to a range of indicators, while the FCL continues to provide an effective complement in reducing risks. However, the strong presence of foreign investors leaves Mexico exposed to greater risks in terms of capital flow reversals and increased risk premia.

Executive directors commended the authorities for the continued maintenance of a strong policy framework, which contributed to the resilience of the Mexican economy in the face of elevated uncertainty. Noting these risks and the recent slowdown in growth, they highlighted the need for steadfast implementation of sound macroeconomic policies combined with an acceleration of structural policy reforms to foster strong, sustainable, and inclusive growth.

Directors welcomed the authorities’ resolve to maintain fiscal discipline. They stressed, however, that more ambitious fiscal targets were necessary to put the public debt ratio on a downward path. In this context, they underscored the need to increase non-oil tax revenues. They saw scope for, strengthening revenue administration, rationalizing tax expenditures, raising subnational taxes, and making the tax system more progressive, while also enhancing public expenditure efficiency. In this regard, Directors also saw merit in establishing a fiscal council to support the administration’s commitment to fiscal responsibility.

Directors urged the authorities to revise Pemex’s business plan to strengthen its financial position and reduce risks to the budget. Directors underscored the need for Pemex to make progress in selling non-core assets and provide credible plans to reduce operating costs to strengthen profitability. Increased cooperation with private firms could also bolster production and diversify risks.

While being mindful of risks, directors saw scope for easing of monetary policy, as long as inflation stays close to the target and inflation expectations remain anchored. They commended the Banco de México’s continued efforts in improving its communication strategy, which would help provide greater clarity and effectiveness to monetary policy. They noted that exchange rate flexibility should remain a key absorber of shocks, foreign exchange intervention should be limited to incidences of disorderly market conditions.

Directors noted that the financial sector remained sound and emphasized that resilience could be further enhanced by closing gaps in the regulatory and supervisory framework. They welcomed efforts to boost financial sector competition and inclusion and considered that a multi-pronged strategy to further boost competition and inclusion should be a policy priority going forward.

Directors underscored that reinvigorating the structural reform agenda is imperative to foster strong, sustainable and inclusive growth. They emphasized the need to reduce corruption, labor informality, and enhance the rule of law by strengthening the AML/CFT framework and implementing the National Anti-Corruption System (NACS). Lowering participation barriers for women and removing constraints to trade in services could narrow the gender gap and boost activity.

Directors considered that, in general, labor informality could be addressed by reducing entry costs strengthening enforcement and replacing hiring and firing restrictions with an unemployment insurance scheme.

Reopening from the great lockdown: Uneven and uncertain recovery