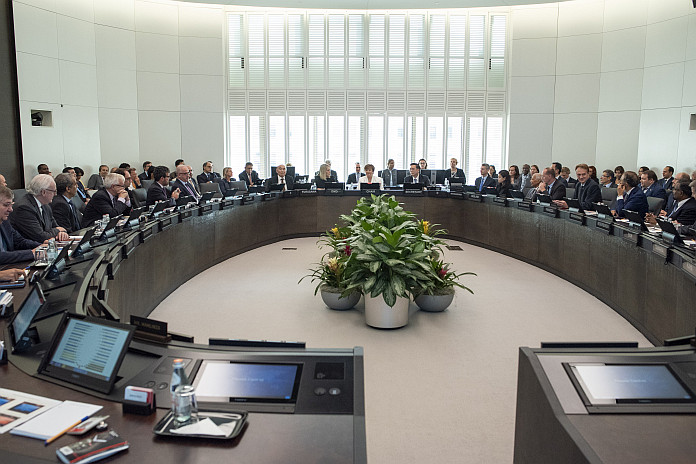 WASHINGTON, USA – The Executive Board of the International Monetary Fund (IMF) concluded the Article IV consultation with the United States.

The economic outlook has shifted dramatically with the rapid spread of COVID-19. 135,000 Americans have tragically lost their lives and many more have become seriously ill. The sudden-stop in activity, arising from the shutdown, has caused an abrupt contraction in activity and a surge in unemployment. The unemployment rate now stands at 11.1 percent and 15 million Americans have lost their job over the past four months. These job losses have disproportionately affected lower-income households, those without a college education, women, African Americans and Hispanics, many of whom have insufficient buffers to cope with the unprecedented size of the economic shock. The economy is expected to contract by around 6½ percent in 2020 and expand by around four percent in 2021.

The Federal Reserve also reacted quickly as the scale of the burgeoning pandemic became clear. In an unscheduled meeting on March 15, the Federal Open Market Committee (FOMC) lowered the federal funds target range to 0 to ¼ percent and indicated it would maintain rates at this level until it is confident that the economy has weathered recent events and is on track to achieve the Fed’s maximum employment and price stability goals. There was a significant increase in Fed purchases of Treasury and agency mortgage backed securities, new credit facilities were launched to backstop institutions and ensure the smooth functioning of a range of financial markets, and the Fed expanded bilateral swaps with a range of central banks to normalize conditions in dollar funding markets.

Executive directors broadly agreed with the thrust of the staff appraisal. They expressed sympathy for the loss of lives and economic hardship caused by the COVID-19 pandemic. They commended the authorities for their swift, extraordinary policy response to protect livelihoods and vulnerable sectors of the economy. Directors noted that the recovery will likely be gradual and subject to significant risks and uncertainty. Amid the resurgence in COVID-19 cases, a deep economic recession, and surging unemployment, Directors underscored the need to deepen public health efforts while continuing to use all policy tools to support the recovery and mitigate the scarring effects of the pandemic on the US economy and society.

Directors welcomed the range of fiscal measures to provide essential lifelines to households, businesses, the healthcare sector, and sub-national governments. They agreed that an additional sizable fiscal package would be needed to strengthen health preparedness and sufficiently boost demand, including through increased federal transfers to state and local governments. Directors recognized that, once the pandemic is fully contained, medium-term fiscal adjustment will be necessary to put debt on a downward path. They welcomed the authorities’ commitment to high levels of transparency and accountability in the use of public resources.

Directors appreciated the Federal Reserve’s decisive response in the early stage of the crisis, which had helped maintain the smooth functioning of financial markets, ease financial conditions, and relieve strains in global dollar funding markets. With inflation and employment likely to remain below targets for an extended period, Directors saw scope for more action, including through expanded asset purchases and more explicit forward guidance, while closely monitoring potential risks to financial stability.

Directors encouraged the US authorities to reverse trade restrictions and to work constructively with partner countries to resolve trade tensions and modernize the multilateral trading system. Many Directors noted that the planned introduction of currency-based countervailing duties could increase policy uncertainty, have negative spillovers, and undermine the multilateral trading and international monetary systems.

Directors observed that the financial system has been resilient in the face of the recent economic and financial shock. They called for continued vigilance given risks from the recession, rising corporate leverage,  continued migration of activity to nonbank financial institutions, and complex interlinkages among institutions and markets. Directors emphasized the need to preserve bank capital buffers and stringency of prudential requirements, enhance macroprudential tools, intensify crisis preparedness, and address data gaps. They also recommended that the authorities consider strengthening institutional arrangements for systemic risk oversight and introducing a more explicit financial stability mandate for principal regulators.

Dominica named tourism location of the future: Where to invest in...