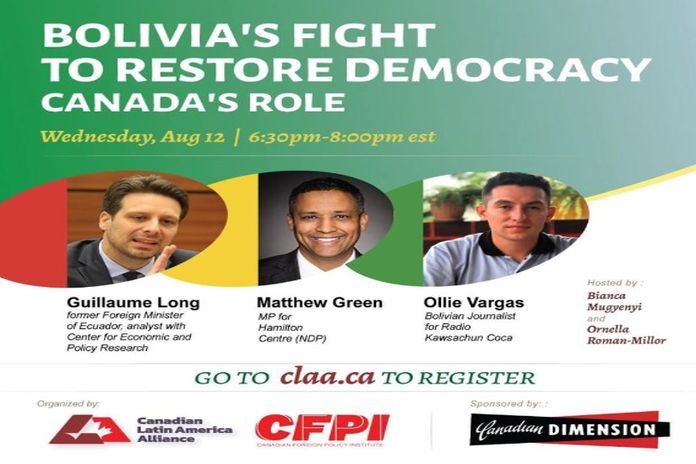 I warmly welcome subscribers to register, irrespective of where you live. I know many of you live in the US, Canada, the UK, Ireland, Australia, New Zealand, Venezuela, Cuba and other countries. Please note that the time is 6:30 pm Standard Time (EST) in Canada. Thus, adjust according to your respective times.

The Canadian Latin American Alliance and the Canadian Foreign Policy Institute invites you to an online event on how and why Bolivia’s first Indigenous president was overthrown, what is taking place in the country right now and the role Canada has played.

In November 2019, Bolivian president Evo Morales was forced to flee the country after military leaders called for his resignation. Right-wing leaders claimed that electoral fraud had been committed, citing a report from the Organization of American States. Canada was one of a number of country’s to deny that a coup had taken place, and quickly moved to recognize the ‘caretaker’ government of Jeanine Áñez.

Since then, Centre for Economic Policy Research (CEPR) produced a report that demonstrated that the OAS claims of electoral fraud were unfounded. Moreover, the country has been thrown into disarray under the Áñez regime, which has killed dozens of protesters and engaged in mass repression of activists demanding elections to restore democracy and end the economic turmoil.

Financing for development in the era of COVID-19