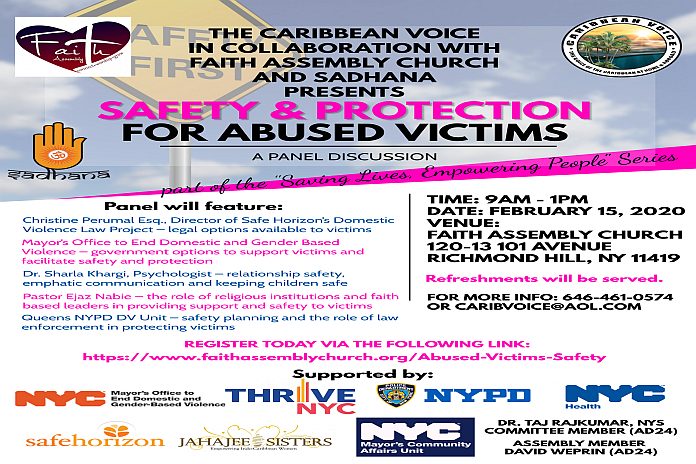 NEW YORK, USA – In an effort to provide victims and survivors of gender-based violence and various other mental health pathologies, with requisite tools, a number of community service organizations have banded together to launch a panel discussion series themed ‘Saving Lives, Empowering People’.

Presentations at this initial panel discussion include:

In addition to Faith Assembly Church, The Caribbean Voice (TCV) and Sadhana are partnering in this initiative.

According to Annan Boodram, president of TCV: “While building awareness is important, it is generally a reactive measure that is not solutions oriented. After years of engagement in suicide and abuse prevention in the Caribbean and the US, we finally decided that in addition to awareness building, counseling and after the fact support, we also needed to explore ways of providing victims and survivors with pragmatic and implemental tools that they can use to create safety and protection for themselves and others”.

The Caribbean Voice reached out to author, academic, lecturer, political and community activist, Dr Taj Rajkumar who brought on board pastor Ejaz Nabie and Faith Assembly Church. Pastor Nabie indicated that his church would partner because he believes that a church should provide wrap-around services to its community and they had already started that journey.

Aminta Kilawan, Esq., of Sadhana stated: “A heavy question someone experiencing gender-based violence has to grapple with as they consider leaving their abuser is how to do so safely and with a support system behind them. Too often, the odds feel stacked up against that possibility. And too often, [we ourselves], intentionally or unintentionally, can be part of the problem. We all know someone experiencing gender-based violence, but not all of us are equipped with the immediate resources to appropriately help that person come up with a safety plan.”

The organizers are inviting other NGOs, CSOs, faith based institutions and individuals to come on board as they plan to use the video from each panel discussion for mass distribution; and to work with others to enable the information to be accessed nationally.

The View from Europe: Tax holidays can help aviation and tourism...