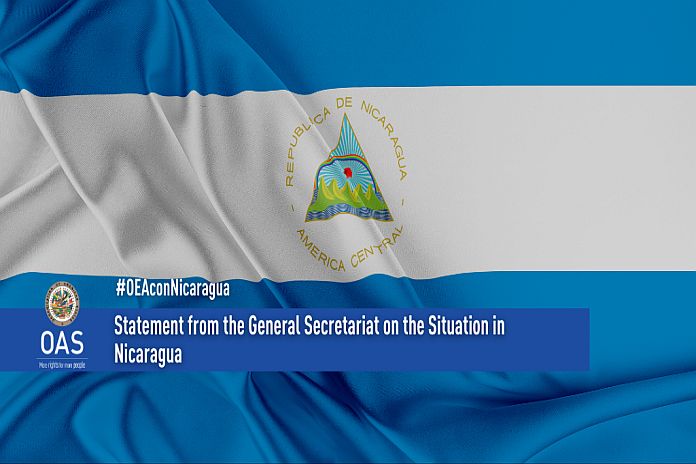 USA / NICARAGUA – The General Secretariat of the Organization of American States (OAS) observes with extreme concern the election of the high magistrates who will make up the Supreme Electoral Council (CSE) of Nicaragua and the approval of electoral reforms that go against the principles and recommendations carried out by the international community, including the OAS Electoral Observation Mission in 2017, and resolutions of the Permanent Council and the General Assembly of the Organization.

The election of magistrates and the approval of these reforms designed by the Special Commission on Electoral Affairs of the National Assembly of Nicaragua clearly give the official party an absolute advantage in controlling electoral administration and justice, eliminating the necessary guarantees and minimal institutional credibility for the development of a free and fair electoral process in November 2021.

It is important to remember the resolution of the OAS General Assembly AG/doc.5710.20, approved on October 21, 2020, and entitled “Restoring Democratic Institutions and Respect for Human Rights in Nicaragua Through Free and Fair Elections,” which resolved that the Government of Nicaragua and the national actors of the Nicaraguan opposition adopt “meaningful electoral reform measures consistent with applicable international standards… so as to promote free and fair elections.” Among these measures, the resolution considered essential “modernizing and restructuring of the Supreme Electoral Council to ensure it operates in a fully independent, transparent and accountable fashion.”

The election of the new CSE and the reform approved by the legislative power, with the support of deputies of the official party and other deputies, erodes, instead of strengthening, a pluralistic political process that leads to the effective exercise of the civil and political rights of the population. The election of new magistrates in the CSE related to the official party consolidates the concentration of power of the FSLN in all four branches of the State – executive branch, legislative branch, electoral branch and judicial branch. This arrangement of power is not conducive to Nicaraguans freely electing their leaders under conditions of transparency.

Since at least February 2017, the OAS General Secretariat has expressed its willingness to work with the Government of Nicaragua to achieve electoral reforms that make its political system a more free and democratic one.

Within this framework, the government signed two agreements that were repeatedly breached:

a) the agreements arising from the “Constructive Dialogue between the governments of Nicaragua and the General Secretariat of the OAS,” held between October 20, 2016, and January 20 2017, signed in February 2017;

b) the failure to implement the recommendations of the OAS Electoral Observation Mission, which were presented to the General Assembly of the Organization in December 2017 and in whose session they were accepted and committed to compliance by the Nicaraguan delegation;

c) the agreement reached at the Negotiation Table between the government of Nicaragua and the Civic Alliance in March-April 2019, which revived the 2018 agreements with the OAS General Secretariat.

And now, this recent election and approval of the electoral reform highlights the unwillingness of the regime – as well as of some political forces – to take actions in favor of democracy and the expansion of political and civil rights of the Nicaraguan population. The OAS General Secretariat recalls that the absence of plurality of parties and the inexistence of separation of powers flagrantly violate the principles of the Inter-American system of which the country is a part.

We urge the official party and the parties that have joined this initiative to adopt electoral reform measures consistent with the principles of the effective exercise of democracy and access to human rights established in the Inter-American legal instruments to which Nicaragua is a signatory. At the same time, we reiterate the ongoing willingness of the OAS General Secretariat to support negotiation processes and the design of reforms that will pave the way for free and fair elections, especially regarding the composition of an independent, transparent and responsible electoral authority.

We do not demand that they do the above because the international community recommends it, we request it because it is the least that the Nicaraguan people deserve; a CSE with credibility that is not subordinate to the regime and the holding of clean and transparent elections with a plurality of parties that guarantee free elections.

Toward a more resilient Europe

Mister BIGSTUFF: Nothing left for us