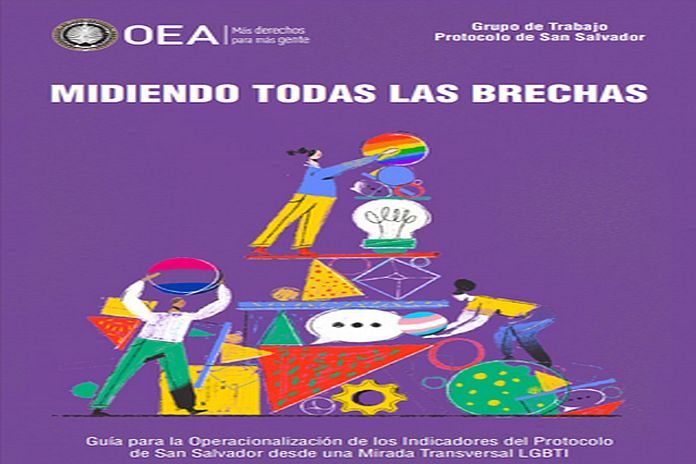 WASHINGTON, USA – The General Secretariat of the Organization of American States (OAS) and the Working Group of the Protocol of San Salvador (WGPSS) launched the “Guidebook for the Operationalization of the Indicators of the Protocol of San Salvador from a Cross-cutting LGBTI Perspective.” This guidebook will facilitate access to Economic, Social, Cultural and Environmental Rights for lesbian, gay, bisexual, trans and intersex (LGBTI) persons.

The guidebook is the first of a series of thematic reports called “Measuring All Gaps” that seeks to shed light on the state of economic, social, cultural and environmental rights of several groups in a situation of vulnerability.

Lesbian, gay, bisexual, trans and intersex (LGBTI) persons are among those that suffer exclusion and discrimination around the world and require specific measures to guarantee their access to and the enjoyment of their economic, social, cultural and environmental rights.

Speaking at the launch event, the president of the WGPSS, Andrés Scagliola, noted that: “In the most unequal region of the world, the inequalities based on sexual orientation, gender identity, gender expression and/or sexual characteristics (SOGIESC), ethnicity and nationality increase the gaps faced by LGBTQI persons in the enjoyment of their economic, social, cultural and environmental rights. The invisibility of these inequalities perpetuates the cycle of exclusion that these persons face on the basis of their SOGIESC. Giving visibility to these gaps and creating policies is a step to stopping this cycle, which is a responsibility of all States.”

This guidebook has been prepared to help States improve the collection of data concerning the state of economic, social, cultural and environmental rights of LGBTI persons. The publication contains suggestions and recommendations, based on a series of progress indicators of the Protocol of San Salvador, on how to better disaggregate data to obtain information that is essential to designing and implementing effective public policies to address the gaps identified. It also contains examples of best practices adopted by states in the region concerning the data collection and social inclusion of LGBTI persons.

Also speaking at the event, the United Nations Independent Expert on protection against violence and discrimination based on sexual orientation and gender identity, Victor Madrigal-Borloz, said: “States must adequately address the scourge of violence and discrimination based on SOGI through public policy, access to justice, law reform or administrative actions. In most contexts around the globe, however, policymakers are taking decisions in the dark, left only with personal preconceptions and prejudices. In my 2019 report to the UN General Assembly I urged States to collect data in an effort to understand root causes and deconstruct barriers created by criminalization, pathologization and demonization. Efforts to implement the Protocol of San Salvador throughout the Americas with a LGTBI cross-cutting perspective are essential building blocks in this endeavor.”

This Guidebook is the result of the work of the secretariat for access to rights and equity, through its department of social inclusion and the Working Group of the Protocol of San Salvador (WGPSS).

The Protocol of San Salvador is the additional protocol to the American Convention on Human Rights to ensure Economic Social and Cultural Rights (DESC). It was adopted in 1988 and entered into force in 1999.