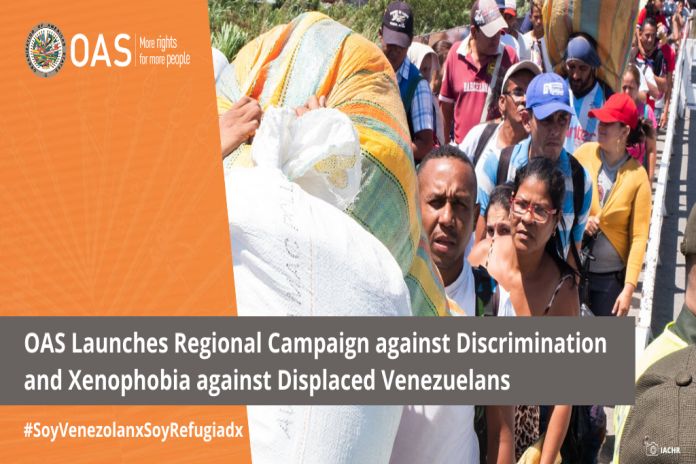 WASHINGTON, USA – As part of the commemoration of World Refugee Day, the General Secretariat of the Organization of American States (OAS) launched a regional campaign against discrimination and xenophobia towards Venezuelans who have been forced to abandon their country. The campaign was presented by the office of the general secretariat for the crisis of Venezuelan migrants and refugees with the goal of promoting solidarity in receiving countries. The ultimate goal is for Venezuelan people to be welcomed and integrated throughout the continent.

Under the slogan “I am Venezuelan, I am a Refugee”, the campaign seeks to sensitize the authorities and the population of the region to the causes of forced migration of millions of Venezuelans, as well as to the difficulties and obstacles they face in their journey in search of a better life.

The video that launches the campaign shows images and direct testimonies of Venezuelans who have fled the Nicolas Maduro regime due to food and medicine shortages, political persecution, hyperinflation, insecurity and human rights violations. It is the first of several communication pieces that will be presented in the coming weeks.

“The best way for the inhabitants of the region to know what Venezuelan people have suffered and to show solidarity with their situation is through accounts of forced migration. With each story, we seek to show that the Venezuelan does not leave because he wants, but that he flees to save his life, and therefore he needs to be welcomed and protected. We want every Venezuelan to be encouraged to tell why he had to flee his country and say without fear ‘I am Venezuelan, I am a refugee,’ “said David Smolansky, Commissioner of the OAS Secretary-General for the Crisis of Venezuelan Migrants and Refugees.

The mission of the OAS general secretariat office to address the Venezuelan migrant and refugee crisis, coordinated by Smolansky, is to work with OAS member countries to address the situation of Venezuelan people who have fled to other countries, who represent more than 17 percent of the population of Venezuela. Since the publication of the regional report in June 2019, this Office has expressed the need to create the bases for a regional consensus that allows the permanent protection of Venezuelan migrants throughout the continent and that Venezuelans receive refugee status according to the Declaration of Cartagena. The Declaration of Cartagena expands the concept of refugees to “people who have fled their countries because their lives, security or freedom have been threatened by widespread violence, foreign aggression, internal conflicts and the massive violation of human rights.”

With 5.1 million people exiled, the Venezuelan refugee crisis is the second largest in the world after Syria and the first in the history of the region. It is estimated that by 2021 this figure may rise to seven million.

If you see something do something: Counseling Save Lives