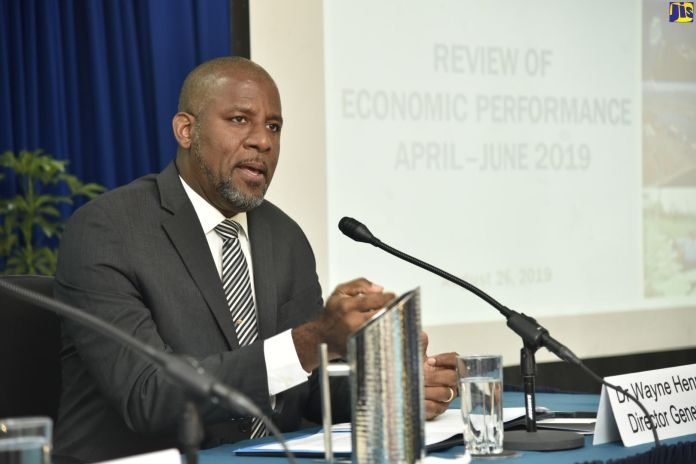 KINGSTON, Jamaica (JIS) – Director General of the Planning Institute of Jamaica (PIOJ), Dr Wayne Henry, speaking at the PIOJ’s quarterly briefing, at the Institute’s head office in New Kingston, on August 26 said policy certainty is among the measures which will be key in safeguarding the country against the possible emergence of another global economic recession.

“The intensity of any global recession is usually exacerbated by policy uncertainty. As such, policymakers have a critical responsibility to ensure that there is certainty surrounding policies related to external trade and macroeconomic fundamentals,” Dr Henry said.

Key among these, he pointed out, are continued strengthening of the macroeconomic environment; creating the appropriate social safety nets for the society’s most vulnerable citizens; and facilitating investments and trade policies focused on encouraging product and market diversification.

His comments come against the background of concerns about the possible emergence of a recession over the short to medium term, and its likely impact on Jamaica’s economy.

Dr Henry noted that following the improved performance of some indicators at the beginning of the year, “the global economic environment has, again, softened in response to uncertainties surrounding geopolitical tension and trade disputes.”

The concerns have arisen as business investments and trade have “slowed down” in the face of tariff threats between the United States of America and China. Further, these concerns have been heightened by the recent occurrence of inverted yield curves on the US stock market, “which have traditionally been a sign of recessions in the past”, Dr Henry continued.

“However, labour market conditions, the other supplementary indicator that is used to predict a recession, do not suggest that a recession is likely to materialise before 2021,” he said.

“Further, recessions are marked by periods of negative growth and all projections still indicate that, whereas growth has slowed, it remains positive. The International Monetary Fund (IMF), in its most recent World Economic Outlook for July 2019, indicates that global growth has been revised downwards by 0.1 percentage point to 3.2 percent and is expected to rise to 3.5 percent in 2020,” he noted. However, pointed to predictions by some analysts that by the end of 2021, “we may begin to see signs of a global recession.”

He argued that in the event of such an occurrence, it is important to note that the main transmission mechanisms for a global economic crisis on the local economy are through trade impacts and the effect of reduced financial flows, inclusive of loans, investments and remittances.

Dr Henry explained that the trade impact would manifest in the form of weakened external demand and depressed commodity prices. “As such, all export industries would, therefore, be at risk, particularly mining and quarrying; hotels and restaurants,” he said.

Financial impacts are usually manifested through developments such as the ‘flight-to-quality syndrome’, Dr Henry said, where investors shift their financial resources from emerging markets and developing economies to markets perceived to be more ‘secure’.

“This is likely to result in lower than anticipated growth. Additionally, given that the US, Canada and the United Kingdom are Jamaica’s main sources for remittance inflows, any economic fallout in these economies would negatively impact its performance,” Dr Henry said.

Against this background, Dr Henry said other measures for consideration in order to mitigate the impact should include industry level retooling and training to improve productivity and competitiveness; and strengthening domestic linkages to minimise the adverse impact of weakened external demand.

“Efforts are already ongoing in the agriculture, manufacturing and the hotels and restaurants industries, to strengthen and reduce the dependence on imports,” he said, expected to augur well for Jamaica.