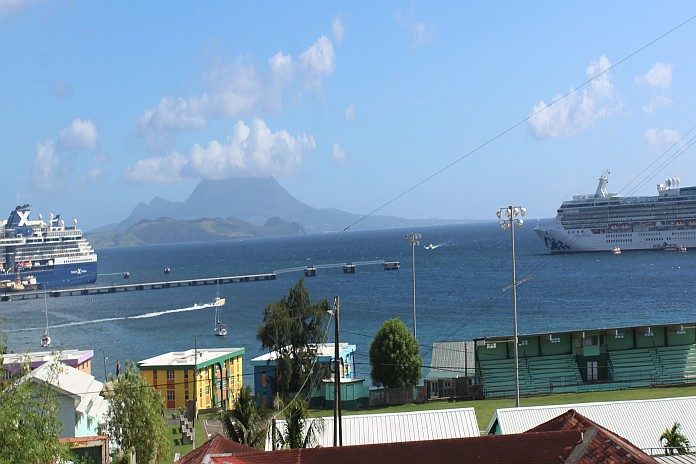 The 2,581-passenger vessel, which is scheduled to make one other call for the 2019/2020 season, had to drop anchor in Basseterre Roadstead and use its tenders to take its passengers to the marina, while the “Celebrity Reflection,” and the “Celebrity Summit,” docked at Port Zante, the Deep Water Port was empty and Sea Dream II anchored at Friar’s Bay.

This is in the face of a November 4, announcement by minister of tourism, Lindsay Grant at the opening of the Florida-Caribbean Cruise Association (FCCA), operations committee meeting at the St Kitts Marriott and from minister of public infrastructure that the formal opening ceremony would be held in November, the “Coral Princess” is one of many ships that the second cruise ship-pier could not facilitate for the past weeks.

Ian Liburd is said has been micro-managing the project and the St Christopher Air and Sea Ports Authority (SCAPA,) admitted during the last sitting of the National Assembly that the Canadian contractor has not met the contractual conditions for it to take over the scandal-riddled facility.

He said SCASPA had informed him that the designers have confirmed that there are concerns with the underwater environment which must be addressed in order to successfully complete the construction project.

He disclosed that the project engineers have found several concerns following an inspection carried out on the pier on November 15, 2019, and it is irresponsible to recommend the official completion of the pier “without the full design requirements.”

There is also concern he said that the pier may not be able to berth two Oasis-class vessels as envisaged and the depth of the area is not in conformity with the plans.

Social media reported that a piece of a large bedrock found at the construction site in August 2018, is said to be sticking out of the sand although special equipment was brought in to crack up the rock in July this year.

“The service provider did not get to crack up (all) the rock and no cruise ship will dock before the hard rock is cracked up,” the source said.

Last year it was reported that a large solid bed of rock was discovered during construction and the first plan was to remove it by using dynamite, but that plan was scuttled following concerns that blasting would have a serious negative impact on the underwater environment as well as severe damage to the existing bulkhead.

In July 2019, it was reported that a ship with special equipment was under contract to break up the large solid rock on the seabed as well as other high spots, which left intact, would have caused severe damage to the bottom of cruise ships when berthing.

Scheduled to cost EC$86.4 million under the then governing St Kitts-Nevis Labour Party administration, the cost of the second cruise ship pier ballooned to a staggering EC$129.6 million price tag – EC$43.2 million more under the Timothy Harris-led Team Unity government. The additional US$7 million (EC$18.9 million) would take the price tag to EC$148.5 million and counting.

Digital financial inclusion in the times of COVID-19