ROSEAU, Dominica – Cabrits Resort and Spa Kempinski, Dominica officially open with the glitz and glamour fitting of a 5-star resort, with the best in amenities and quality service on November 2, 2019.

On a beautiful evening in Dominica, government officials, diplomats, guests from around the business world, citizenship by investment (CBI) agents, property owners and investment conglomerates gather to witness a true marvel, nestled in the nature island.

The sound of steel-pan music, a cultural exhibition of dance and song filled the air in the continuation of Dominica’s creole festival and independence atmosphere of joy and accomplishment, entertained a world-class audience.

“I am proud to have been associated with the Cabrits Kempinski Dominica opening today,” said a senior government official, adding “I can remember when I walked this site with Mohammed Asaria, it was bush and notwithstanding the challenges, the end-product is remarkable. Dominica has a world-class property we all can be proud of.”

Prime Minister Roosevelt Skerrit in his remarks congratulated Range Developments and Azaria for “delivering as promised.”

“Many said it was not possible. Others doubted the ability of the developer in completing the project as planned. Today, they are all proven conspirators of delusion,” Skerrit said.

“I encourage Dominicans to maximize the personal development afforded here. The many business opportunities that will become available, and the continued advancement of the island as the government of Dominica work towards building a new airport; the development of the port; the hospital, roads and other infrastructure,” Skerrit stated.

Meanwhile, Range Developments has the best track record and the most successful developer of luxury real estate projects in the Caribbean, and the impressive opening of Cabrits Resort and Spa Kempinski, Dominica – the enemies of the CBI programme and perpetrators of “fake news” and “deception” are already on the attack in a losing proposition.

One outlet said: “Iranians are the largest group of nationals buying up passports under the Citizenship by Investment program for the Commonwealth of Dominica and the island of Grenada. The report also claims that sources within the Trump administration are concerned that more Iranians are paying big money to buy passports in a bid to evade U.S. sanctions and “Several counter-terrorism specialists in the U.S. also affirmed that security concerns over the passport issue have been heightened in recent months.”

It went on to add: “The evidence of Iranians owning Dominica’s passport and citizenship seem to have come full circle over the past few days. We have learned that several Iranians have shown up for the opening of the Kempinski Hotel and according to our sources they have shown up not just as guests but also as entitled shareholders of the Kempinski Hotel. It is also alleged that the Iranian visitors have been quite aloof and, in some instances, very disrespectful and have been quick to assert their entitlement as shareholders.”

These assertions are untrue, malicious and conscripted by the opposition with the intent to tarnish a segment of the CBI programme. This is also another attempt by a fake news outpost and suspect journalist should, if possible, show proof or be warned.

Range Developments completion of the Park Hyatt St Kitts and Nevis, and Cabrits Resort and Spa Kempinski, are powerful statements why, when it comes to the CBI programme,  investments options, and having the accolades as the most successful developer of luxury real estate projects in the Caribbean, it is unquestionable why participants in the programme  – navigate their future with the experts.

“Grenada is open for business,” said a top official, with Range Developments, commencing construction of the Six Senses La Sagesse, Grenada by the end of this year and completion is expected in 2022.

The property will be built on a promontory in Saint David’s Parish, an unspoiled area of remarkable natural beauty boasting ‘one of the top ten beaches in the Caribbean’ as described by The Sunday Times.

This luxurious citizenship by investment project will create over 500 jobs on the island as well as help cement its reputation as a top tourist destination.

Grenadian citizens can travel without visa restrictions to more than 130 international and Commonwealth countries. These include the United Kingdom and all other members of the European Union, and important business hubs such as Singapore and Hong Kong. 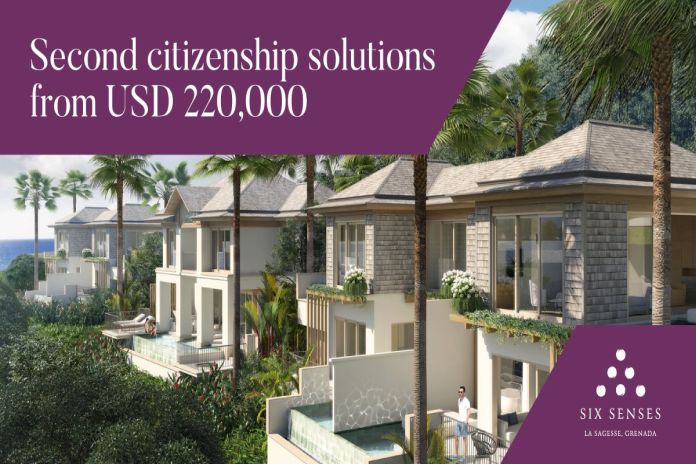 Grenadian citizens enjoy unique access to the USA’s E-2 visa, privileges to Europe, Russia, and China, are some of the benefits you enjoy with a Grenada passport by investing in Range Development government-approved project, Six Senses La Sagesse, Grenada.

“The initiation of this project by Range Developments provides a clear demonstration of the confidence of investors in the Grenada economy, said prime minister Dr Keith Mitchell.

In keeping with the success of Park Hyatt St Kitts and Nevis, and Cabrits Resort and Spa Kempinski, “Range will create the unimaginable at La Sagesse. It is a destination waiting to be created. The project will be transformative, not just for St David’s but the entire State of Grenada.  In a very short period, La Sagesse will become the second tourism capital in Grenada,” Asaria reaffirmed.

The World Bank approves US$25 million for Grenada first recovery and...