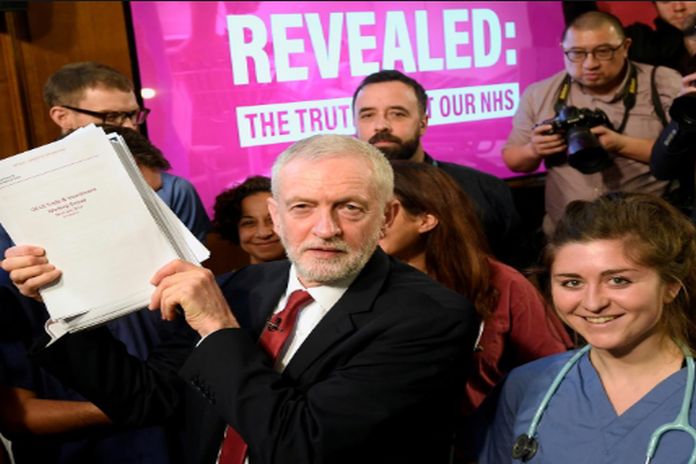 NEW YORK, USA, (Newswirepubs) — A treasure trove of classified documents about secret trade negotiations between the United States and the United Kingdom – discussion which aimed to prepare the US-UK economic relationship for the post-Brexit era – were stolen by Russian government hackers and leaked to the opposition Labour Party ahead of the December 2019 general election.

The Russian government hackers stole the classified papers – 451 pages in all  –  from an email account of Liam Fox, who was then the UK trade secretary.

The material in the dossier was posted to the social media site Reddit. It was used by Jeremy Corbyn, then-Labour Party leader, to argue that the Conservative government was looking to sell the National Health Service (NHS) to private American health care conglomerates.

The Russian government hackers’ action is similar to their efforts in the United States in the run-up to 2016. The hackers, employed by the GRU, Russia’s military intelligence branch, stole emails from the Hillary Clinton campaign and gave them to Wikileaks. Wikileaks, in turn, coordinated the publication of the emails with the Trump campaign – through Roger Stone – in order to inflict the most damage on the Clinton campaign.

The hacking of Fox’s email account by Russian government hackers was first reported by Reuters on Monday, 3 August.

Fox, who is an MP, is the U.K. nominee to head the World Trade Organization (WTO).

Reuters reports that the Russian hackers, using “spear phishing” technique, broke into Fox’s account “multiple times” between 12 July and 21 October 2019. Fox left his post on 24 July 2019, so it may be the case that the Russian hackers broke into both his government email account and his private account, where some of the classified material was still kept even after he had left his post.

The National Cyber Security Centre (NCSC), the branch of GCHQ responsible for UK cyberdefense, refused to comment on Fox’s email hacking because of the continuing investigation.

A Cabinet Office spokeswoman said the government had “very robust systems in place to protect the IT systems of officials and staff”. Fox did not respond for comment and his spokesperson referred to the Cabinet Office statement. Spokespeople for Raab and Ben Wallace, defence secretary, also declined to comment. When Raab last month accused Russian hackers of having sought to interfere in the UK election, he was clear that any assault on the democratic process was “completely unacceptable”. He did not suggest that Moscow had stolen the documents but said there was evidence that “Russian actors” had played a role in “promot[ing] the illicitly acquired material online” via Reddit.

Dmitry Peskov, President Vladimir Putin’s spokesman, told the FT at the time that accusations of interference in the 2019 election were “unfounded”. Reddit revealed in December that the distribution of the leaked documents online bore the hallmarks of a Russian disinformation campaign known as “Secondary Infektion”, which uses fake accounts across dozens of online platforms to sow discord in the west.

The Guardian reports that in 2017 up to 90 email accounts belonging to peers and MPs were hacked in an orchestrated cyberattack. Later that year it was reported that passwords belonging to 1,000 British MPs and 1,000 Foreign Office staff had been traded by Russian hackers, with the majority of passwords said to have been compromised in a 2012 hacking raid on the business social network LinkedIn, in which millions of users’ details were stolen.

Last week, the United States, the United Kingdom, and Canada accused Russian government hackers of trying to hack biolabs and research centers in the three countries in order to steal COVID-19-related research on vaccines and treatments.