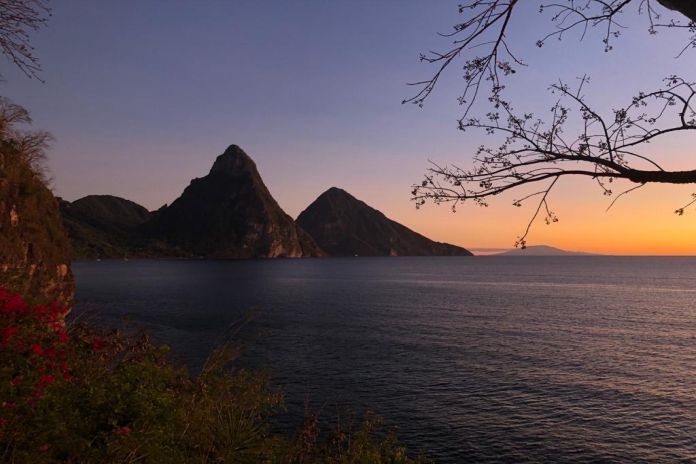 The iconic Pitons that we often marvel at are not only a mystical backdrop, worshipped by both nationals and tourists who visit Soufriere. They represent the resilience of a small nation that, through its actions, has carved its own niche on this ever-evolving world stage. The Pitons are symbols of unique natural beauty, seemingly designed by God’s own hands. Below these dramatic twin peaks lies an ever-active body of water that is one of the key catalysts within Saint Lucia’s fluid and dynamic blue economy.

This body of water is a very active living part of Saint Lucia’s nautical history and is the lifeblood of the Saint Lucia tourism product and experience. It starts from the coastline of the village of Canaries and continues flowing past the great Pitons. The activities that take place here are far-reaching, impacting the social, economic, cultural, political, historical and geographical fabric of the nation – a real complement to our unique Piton. This dynamic body of water is part of an area called Soufriere Marine Management Area (SMMA).

Created in 1994, more than 25 years ago, by men and women from our very own Saint Lucia who, though from varied backgrounds, had a common vision and the will to see it through, the SMMA has played an important role in Saint Lucia’s development story. This entity was born out of the intense task of public consultations, discussions, negotiation and compromise, which took place in the town of Soufriere in the 1990s as a remedy for escalating conflicts among users of the coastal areas.

The founders’ vision for the development of the SMMA was articulated in a document issued and signed by the then chairman of the Soufriere Foundation:

“For there is a vision. Through this process, as indeed through all the activities that the Soufriere Foundation is engaged in, our aim is to define and shape a new path of development for our community. Our ambition is to create a new relationship between economic activities, cultural and natural resources. Our vision is of a process of development which uses and develops our natural and cultural assets without destroying them, which enhances social and economic opportunities for the community, and which creates positive linkages between all sectors. In this context, the exercise in conflict resolution and participatory planning which will result in the publication of this document was particularly timely and critical.”

This initiative was indeed timely and critical. The SMMA gave structure to the developing yachting industry and to the dive sector, it enhanced the activities of Soufriere and Canaries fisher folk, created new recreational spaces for swimmers, and enhanced the livelihoods of thousands of persons directly and indirectly affiliated with the tourism product of Saint Lucia. It addressed and gave remedies to many of the user conflicts which came out of many competing interests using the resource, the waters to and from the Pitons.

Fishing priority areas were declared and mapped out, yacht moorings installed, dive and snorkeling sites were created, marine reserves and multiple-use areas were identified, and even boat-building areas suggested. SMMA rangers were appointed and patrolled daily with the assistance of the Marine police. Violators were identified and dealt with. Yes, reader, this was the brain-child of persons of Saint Lucia, establishing an entity that would deal head-on with local conflict issues within coastal waters, and serve to protect and preserve its resources. The SMMA created an area where many users could enjoy the resource and have economic benefits without conflicts.

The success story of SMMA is internationally known. Most first-world nations have studied the SMMA. Universities from Great Britain to Chicago, to Australia, have written papers on the SMMA as a world-renown approach to sustainable development and managing user conflicts, a best practice that should be duplicated. The managers of the Great Barrier Reef of Australia have studied the SMMA in detail and implemented most of its guidelines. The SMMA has been referenced by students and academics researching user conflicts, resolution, and use of a water resource by multi-users. Like the iconic Pitons, SMMA, a concept born out of a unique approach is now recognized as a best practice the world over. Don’t take my word for it, use your smartphone and google SMMA. Yet, now in Saint Lucia, it is not being recognized, celebrated, or allowed to function as intended.

Today in 2020, Saint Lucia, like other countries across the globe is faced with challenges resulting from the onset of the COVID-19 pandemic. The halt and subsequent decline in activities within the SMMA has led to significant loss of revenue, rendering the SMMA incapable of meeting its obligations with respect to staffing and fulfilling its role in enforcement. This follows a period of vibrancy for the local blue economy, which also presented its own challenges.

Up to the start of the year, Saint Lucia’s cruise ship arrivals were up and exploding. Boating had become an important component of the Saint Lucian experience. Yacht arrivals were steadily increasing. Saint Lucia had become a popular dive destination. Catamarans held their place as a unique party experience and almost every visitor wanted to view the Pitons from the water. Soufriere had become the breadbasket of our tourism product.

The vigorous marketing by tourism agencies, using the crystal blue water shots of the Pitons, sold Soufriere and Saint Lucia as a sexy destination for tourists. Bravo indeed. However, with this tourism expansion, a familiar challenge, managing the use of the same resource by these competing interests resurfaced on a larger scale. Cruise ship arrivals and hotel guests along with nationals were all competing for the traditional sites. Numerous activities compounded the negative impacts of climate change on the coral reef ecosystems.

Marine reserves, which preserve the livelihoods of fishermen by allowing fish to mature and multiply in protected areas were increasingly compromised. Challenges at certain beaches and adversarial effects on the hotel experience in the surrounding area were making the news. There was mounting need for the SMMA to demonstrate greater authority and efficiency in living up to the mandate for which it was created.

Now, despite the dire impacts of COVID-19, the reduction in activities in the SMMA area has simultaneously had several positive impacts on the health of marine life in the area. There has been a reduction in sectoral pressures that lead to pollution, overfishing, habitat loss/degradation, among other negative impacts. This presents an opportunity for the SMMA to renew itself on sound footing and build confidence among its various stakeholders.

Overcrowding of beaches, congested bays with too many boats, overuse of dive sites, dangerous marine traffic along the coast, can all be addressed using the SMMA and its model. The current situation also highlights the need for SMMA to improve its operational efficiencies, with the view to becoming financially self-sufficient. As we look towards rejuvenating the tourism sector, it is now an opportune time to acknowledge and revitalize the SMMA’s role and relevance in the sustainable use and development of the areas. The document which created SMMA, and the cabinet conclusion which endorsed it, can and should be used by the authorities to address the challenges which accompanied the booming expansions in the tourism sector.

The SMMA agreement on the use and management of marine and coastal resources is the blueprint for the management of our island’s coastline. Let us demonstrate the will to address the challenges confronting the tourism experience using something of our own, created by us, which has been proven to work.

Cuthbert Didier is a maritime consultant. An experienced professional with over 30 years in the yachting industry, familiar with all aspects of yachting from marina operations, yachting regattas and business management. He is competent in land-based and maritime tourism including the emerging blue economy.

Facebook’s Instagram and Messenger users can now message each other

FOREX issues could shut down small businesses in Trinidad and Tobago