*Following intense debate and resistance from influential quarters on the State of Emergency Resolution, it was amended from 12 months to 6 months.

BASSETERRE, St Kitts –  Prime minister Dr Timothy Harris on Friday, April 17, 2020, at an emergency sitting of parliament introduced a resolution “on the grounds that” the “COVID-19 virus continues to pose a significant threat of a natural calamity, on the scale of a public health urgency to the Federation of St Christopher and Nevis; and that it is, therefore, necessary to extend the State of Emergency up to 12 months. 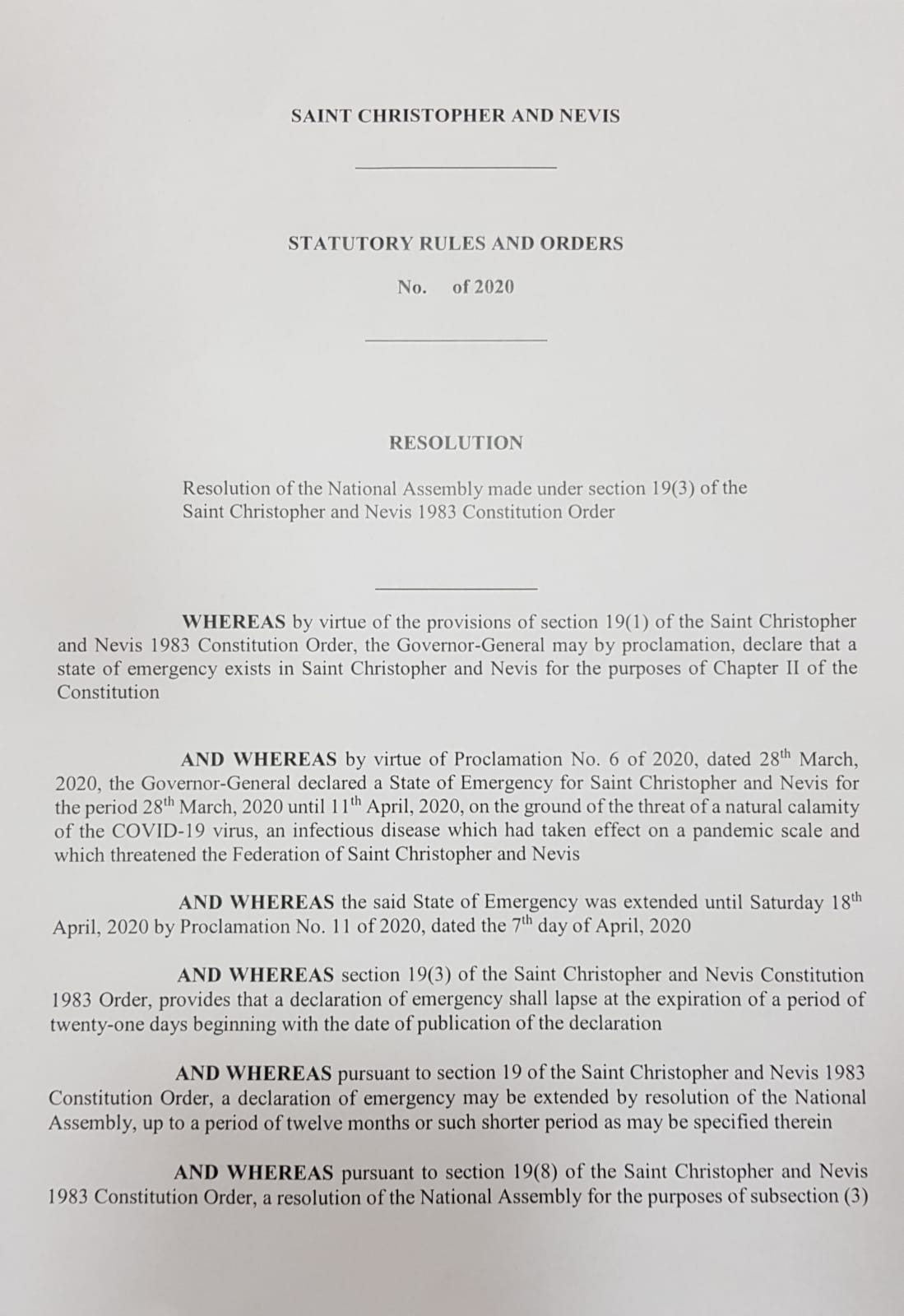 The St Kitts-Nevis Labour Party (SKNLP) member of parliament for St Christopher 2 (Central Basseterre), Marcella Liburd in her contribution to the debate, accused prime minister Timothy Harris of being a “despotic” in the light of the resolution to impose a 12 month State of Emergency, in particular, to delay elections, taking into consideration that the lawmaking body is automatically dissolved on May 14, and general elections must be held by August 11, 2020, per the Constitution. 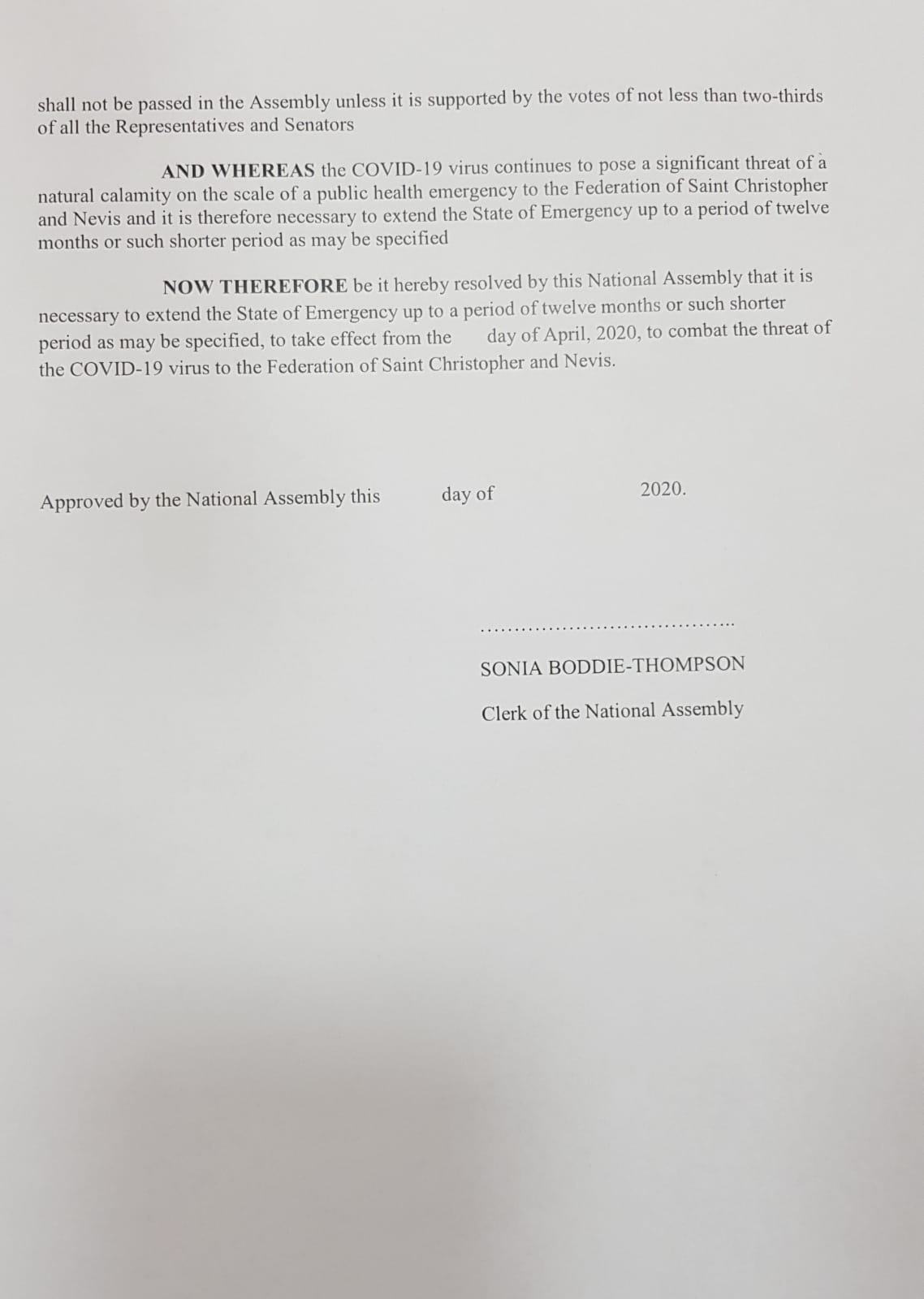 “Mr Speaker, I will not support this diabolical act to try to give this government more time beyond the Constitution. People, do not be fooled by this (resolution) for a 12-month period,” said Liburd, deputy political leader of the SKNLP.

In total agreement with her St Christopher 3 (West Basseterre) colleague, Konris Maynard, a clause in the resolution which states that the duration of the State of Emergency is ‘up to a period of 12 months,’ is not in line with the wording which states ’12 months.’

“Why is it that the government of this country would want to have some discretion on the limitation of the peoples’ rights, because … when you have a State of Emergency that is what happens; you limit peoples’ rights and their freedom of movement. Why does the government want 12 months of discretion on that to manipulate. Why you want that Mr Speaker?” Liburd, an attorney by profession asked.

Liburd pointed to the Constitution on the timing of a general election in St Kitts and Nevis. She noted that the last general election was held on February 16, 2010. However, the five-year term of an incoming administration begins on the day of the first sitting of the National Assembly.

“There are set dates in the Constitution (with the full five-year term ending on the 14 of May.) … Come the 14 of May, the National Assembly must be dissolved, emergency or no emergency. … Come the 11 of August, we must have the general elections. We must have those elections. All who want to stay in power after that, the people of this country must know that we do not want any despots to be running the country.

“People know that it is in times like these when governments have authority to restrict your rights, that the despots show themselves and what we are seeing here today is a despotic act to try to give themselves authority for 12 months past May 14 and August 11 when the elections are due.

“Let them know that by August 11, this country must go to the polls. They have been weighed in the balance and they have been found wanting and they are trying in every way to extend the time and power,” Liburd explained, “Not this time brother, not this time, not this time and the people of this country must understand that. We must not allow them to come in here and try to extend their authority past a time that the constitution does not give them,” said Liburd, a former speaker, former deputy speaker and former minister of health, social and community development and gender affairs.

“Who can support that?” Liburd asked, “Who can support that Mr Speaker? Not today. We say come May 14, the House is going to dissolve (automatically) if you do not dissolve by then and come the August 11, you have to call the election,” said Liburd, who pointed out that South Korea is also facing a pandemic, but recently held their general elections.

“Mr Speaker, I will not support this diabolical act to try to give this government more time beyond the Constitution,” Liburd concluded.

Meanwhile, weekly paid Government Auxiliary Employees (GAEs) and employees of the Skills Training Empowerment Programme (STEP) are scheduled to receive their wages a day early next week Thursday, April 23, 2020, instead of the usual Friday, to avoid inconvenience during assigned shopping periods under the State of Emergency.

Today, Friday, April 17, residents of Zone Two (West Side in St. Kitts) and Zone Four (the parishes of St John and St George in Nevis) were allowed to leave their residences between 7:00 a.m. –  5:00 p.m., to conduct essential business at banks, money service providers, pharmacies, supermarkets, and food outlets.