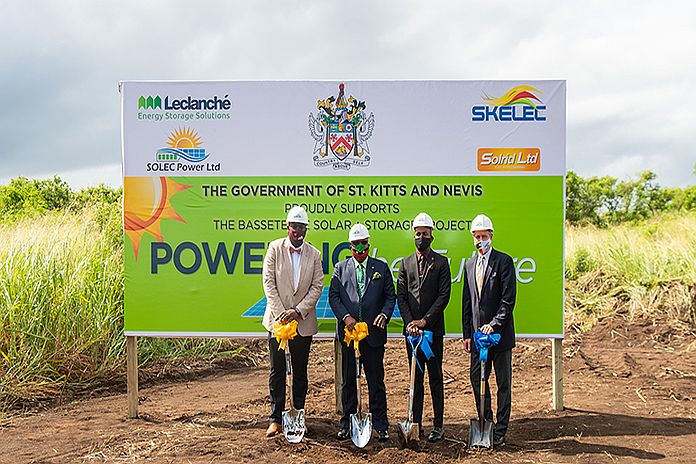 LONDON, England – Last December, the government of St Kitts and Nevis, the state-owned St Kitts Electric Company (SKELEC) and Leclanché announced that they broke ground on a landmark solar generation and storage project that will provide between 30-35 percent of St Kitts baseload energy needs for the next 20-25 years while reducing carbon dioxide emissions by more than 740,000 metric tons; meanwhile, a former member of parliament and attorney at law, Dwyer Astaphan, while applauding the government for the move to renewable and clean energy, says: “I think they have made a bad decision in this case, given the importance of this project,” alluding to the exclusion of the people of St Kitts and Nevis from ownership interest, advised, “I think it is a big mistake and I hope it is not too late to reverse it.”

The former MP and practicing attorney noted: “Taking into consideration the monthly electricity bills that we have to pay SKELEC. Who will then pay a foreign company? Why allow that to happen? Besides, wide-scale consultation, the cost of the project, the structure of the facility and the ownership structure hasn’t happened.”

“Democracy requires active and proactive involvement of the social and economic partners and particularly of the media and society at large. This project is not a hotel or a factory. We are talking about our island’s power supply and energy supply. This is all about power to the people and a company controlled by special interests and given so much power, over the energy supply of our little island,” Astaphan continued. “Besides, they would be in a position to exercise heavy influence on political decision-makers at the potential detriment of the people and would constitute, among other things, a potential threat to national security, the social and economic well-being of the people,” he questioned.

“Why can’t the state-owned St Kitts Electric Company (SKELEC) open up its shares and become a public company and invite people in St Kitts and Nevis to buy shares in it.”

A press release outlining the project says: “Construction and start-up will take approximately 18 months. The project consists of a fully integrated 35.7 MW solar photovoltaic system (solar field) and a 14.8 MW / 45.7 MWh lithium-ion battery energy storage system (BESS) utilizing Leclanché’s proprietary energy management system software. Upon completion, the St Kitts project will be the largest solar generation and energy storage system in the Caribbean and a model for other island nations worldwide. In its first year of operation, the system will generate approximately 61,300 MWh of electricity with a 41,500 metric ton reduction of CO2 emissions.”

“Leclanché will provide a turnkey solar plus storage solution together with its main subcontractor Grupotec, headquartered in Valencia, Spain, an experienced engineering and construction firm and leader in the photovoltaic energy sector. Leclanché will own and operate the facility under its strategic build, own and operate model through its SOLEC Power Ltd subsidiary with partner Solrid Ltd.”

Astaphan noted: “The $70 million microgrid project is being built by Leclanché, one of the world’s leading energy storage companies, which will serve as the prime engineering, procurement and construction (EPC) contractor,” meantime “the chief executive officer of the Swiss company is saying they’re going to have high profitability from it.”

“In 2017, Leclanché sales were, about US$13 million. And that same year S. L. Horsford & Co Ltd., which is a Basseterre company, their sales were the equivalent of nearly US$60 million, nearly five times that of Leclanché. And in 2019-20, the sales of TDC, another local company, was about US$57 million. So what are we having here? This cannot be a good decision for St Kitts and Nevis,” he said.

And consider this: “Clean, renewable energy produced from the solar + storage project will be sold to SKELEC under a 20-year power purchase agreement at flat rate over that entire period which is designed to provide a significant long-term savings to the projected diesel generation costs. Leclanché’s fully integrated system consists of three core components: the solar field, battery storage system and energy management system software. The batteries will be housed in 14 custom-designed enclosures near the main SKELEC power station and adjacent to the solar field. Additional equipment such as inverters, transformers and protection devices will ensure that the electricity from the new project is reliable and safe.”

“The project is being built in St Kitts’ Basseterre Valley on a 102-acre plot of government-owned land adjacent to the current SKELEC power station … The land, which was once used for sugar cane production but has been idle for years, was leased to Leclanché by the government of St Kitts and Nevis under a 20-year agreement with an automatic five-year renewal. Environmental Impact Assessment and geotechnical analysis were successfully completed in 2019, demonstrating the renewable energy project will bring a positive impact to the Basseterre Valley,” said a press release.

Astaphan advised that professionals he consulted – “all of them, have said that the people should own this operation.  They have expressed opposition to Leclanché owning it. We in St Kitts and Nevis have to realize that elections are not supposed to be just transactional. Elections are supposed to be aspirational. We the people of St Kitts and Nevis must understand as Marcus Garvey indicated – you own the land, then you control the game.”

“We set out to create a model solar energy production and storage system here for SKELEC that generates long-term financial and environmental benefits for the utility and its customers without SKELEC having to make a costly up-front investment,” said Anil Srivastava, chief executive officer, Leclanché. “Together, we have designed a system whose construction and ongoing energy production will be paid for overtime from the sale of clean and reliable solar energy. We are pleased to have accomplished both objectives while developing a project financeable by well-established institutional investors.”

Young people have a major role to play in ridding the...